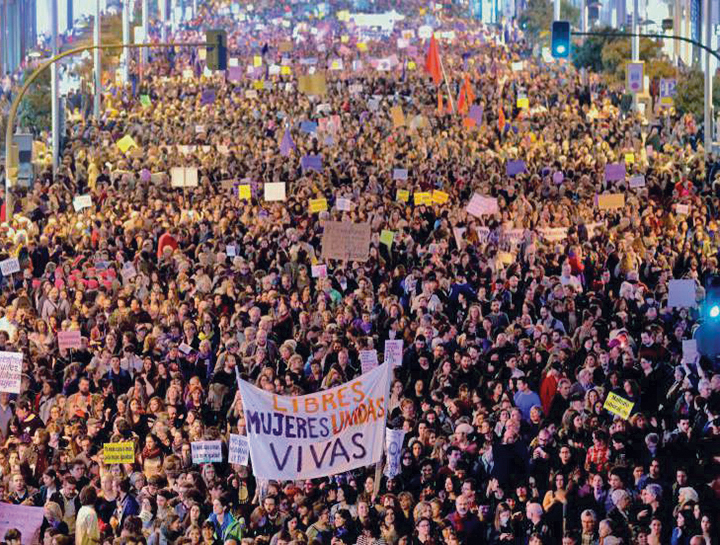 THE STRIKE and the mobilizations of March 8 were the most important in the history of the Spanish state, or almost. Can you describe the size and scope of the strike? Can you share any stories that give us a sense of the day? And please tell us a bit about your own role.

I AM a member of Anticapitalistas and feminist activist, and I participate in the feminist strike assembly in Catalonia.

The strike of March 8 was truly a historic day. The afternoon mobilizations were the most important in the history of the feminist movement in the Spanish state. Hundreds of thousands of people gathered in the biggest cities like Barcelona, â€‹â€‹Zaragoza and Bilbao, with around 1 million in Madrid. And there were also significant mobilizations in small towns and cities.

In addition, the strike itself involved some 2 million people in the labor movement, making it the first feminist strike in history. All this takes place in a context where it has been many years since there has been a general strike. So overall a success.

CAN YOU describe how the strike was organized? Which were the most important organizations?

THE STRIKE began to be organized in August and September 2017, a period during which many feminist collectives in the Spanish state came together to analyze the feminist movement and the situation in which it was operating and assess the organizational potential of ‘a strike on March 8. , 2018, following the strike organized by feminists in Argentina in March 2017.

Since then, we have called assemblies, discussed political platforms in all parts of the Spanish state where feminists are active and organized women’s committees among trade unionists and activists in general. It all came together at a statewide meeting of 450 women in Zaragoza, where we agreed on a manifesto and what specific type of strike we would call it.

WHAT EXPLAINS this success? Is sexism in the Spanish state worse than in the rest of Europe? Or is it because the feminist movement is so strong?

I THINK that machismo in the Spanish state is as strong as in other European and non-European countries. Of course, there are peculiarities. Today, the feminist movement is an international phenomenon which, in addition to activating pre-existing layers of organizers, has brought in a new generation.

The particular success that we have had in the Spanish state clearly stems from many factors.

The first is that while we failed to organize a feminist strike last year, the March 8, 2017 protests were the largest I have ever seen. It sparked the appetite for action as well as the expectations.

Another factor is that there has been a very strong emphasis on elections and electoralism in recent years. This focus led to some victories, but also many limitations.

In this context, the feminist movement organized on November 7, 2015 a historic mobilization that brought together people from all over the Spanish state. Since then, feminism has kept the social pulse in the electoral cycle and is now very visible, which has not happened with other movements.

At the same time, the strike gained a certain legal legitimacy with the unions. Alternative union federations have called for a 24-hour strike, while major union federations have called for a two-hour strike. This was essential in order to be able to call a strike in workplaces and in predominantly female sectors. This allowed the strike call to spread to areas that may not have been used to participating in the movement.

On the other hand, the media created a powerful phenomenon in which hundreds of women journalists got involved in disseminating information about the strike.

This media phenomenon meant that even the reigning Queen of Spain was talking about March 8, and TV shows were devoted to her in prime time. This openness in the media has led to a great debate about the meaning of the feminist strike, whether it is a legitimate tool or not, and even a discussion about the definition of feminism.

Was THE strike the expression of forces of the radical left, such as the left-wing Podemos party and the independence movement in Catalonia? Or is it a separate phenomenon? From reports written by members of the Anticapitalistas, it seemed that the revolutionary left was playing an important role, but even some prominent figures in the Catholic Church offered some support. All this to say that this is a mass action.

IN the Spanish state, as in other countries, we have seen expressions of opposition to the neoliberal crisis and its consequences. Feminism today is a result of this more general dynamic. In recent months, we have witnessed very important mobilizations denouncing the poverty of retirees throughout the Spanish state and, of course, the demonstrations in Catalonia.

However, although the feminist movement stems from this confrontation, it retains its peculiarities, and as a result, it has been able to stir up political parties and unions. The strike of March 8 was an act of the masses that transcended the unions and all political parties on the left, and even on the right.

There is no doubt that women active in political parties or unions participate in the spaces of the feminist movement, but the phenomenon goes far beyond this layer and has demonstrated two important things: the traditional union federations have not known to put itself at the head of the feminist movement and the demands of the workers, and the right is very badly positioned in relation to the strike.

It is precisely for this reason that March 8 was not just a mobilization. It was also a strike that made all these conflicts between different interests more visible.

WHAT ARE the specific demands raised by the feminist strike? Do you expect to gain anything in the short term?

PEOPLE CAN read the strike manifesto here. It sets out the demands of the feminist movement in many areas, including labor issues, the economy, gender-based violence, migration, education, health, sexuality, etc.

Having said that, there are two things we need to be clear about. The first is that this is a long-term struggle, as many social, cultural and economic changes are needed to combat the deeply rooted forms of discrimination in our society. These can only be overcome through sustained mobilization, women’s self-organization and structural transformations.

The second thing is that we know that there are concrete legislative changes in terms of economy and employment that could be implemented today, which point to important improvements for women.

For example, repealing the government’s neoliberal labor laws and supporting reforms that reduce the wage gap and feminized poverty would put us on the path to a more just and equitable distribution of social work, both productive and reproductive.

Or, for example, a “statewide deal” was reached last year on violence against women, but it was limited to amending the previous law. However, in addition to being politically restricted, the law has not been a budget priority this coming year.

While they pass laws prohibiting violence against women, they are not devoting the necessary resources to it. So we see what we can do as collectives of young women to organize against assault and sexual violence in the streets and clubs and bars, because we are able to do much more than the government.

The next step will be to reflect and translate what we experienced on March 8. We must accurately assess the political terrain and shape specific demands that will allow us to move forward.

But we also need to think about our next actions. We have seen that many women show an interest in feminism. But while they participated in the day of strike, at the same time, they were not moved to participate in our assemblies, collectives, caucuses.

We must aim to build a movement that harnesses all this potential. And, of course, we have to make March 8, 2019 an even bigger success. We aim to organize the strike more effectively in the workplace and to extend the strike to caregivers.

CAN YOU explain the international development of the March 8 mobilizations in recent years? For example, is there coordination between the massive marches in Argentina, the protests against the assassination of Marielle Franco in Brazil and the Women’s Marches in the United States? Or is it rather that specific national struggles take place in a global context of oppression and gender-based violence?

I THINK it’s more the latter. That is to say that the struggles are national, but there is a mutual international recognition and a global dynamic.

We have seen a tendency for social movements to retreat to the national level in the West. Fortunately, feminism provided a counter-trend. The different feminist movements recognize each other. We know that we are fighting against common oppressions, and we see that our movements reinforce struggles in other regions.

There are a few international networks that emerged from the 2017 International Women’s Strike, although they are weak. This did not prevent us from considering the struggle of women in Poland for free abortion on demand as our own, nor from repudiating the assassination of Marielle Franco in Brazil, nor from organizing actions of solidarity with the Women’s marches against Trump in the United States.

I think we live in a time when neoliberalism is becoming more authoritarian, which will try to create divisions between different sections of the people and popular classes, between different peoples, in order to sabotage the solidarity between them. Many times they will succeed, but feminism forges bonds of solidarity.

IS THERE something you would like to communicate to women in the United States?

YES. THE Women’s Strike and 99 percent feminism shows us that even at the heart of global imperialism and capitalism there is significant and radical resistance. While they want to build walls, we are building bridges between common struggles!

The desolate Spanish province where Hollywood westerns were filmed