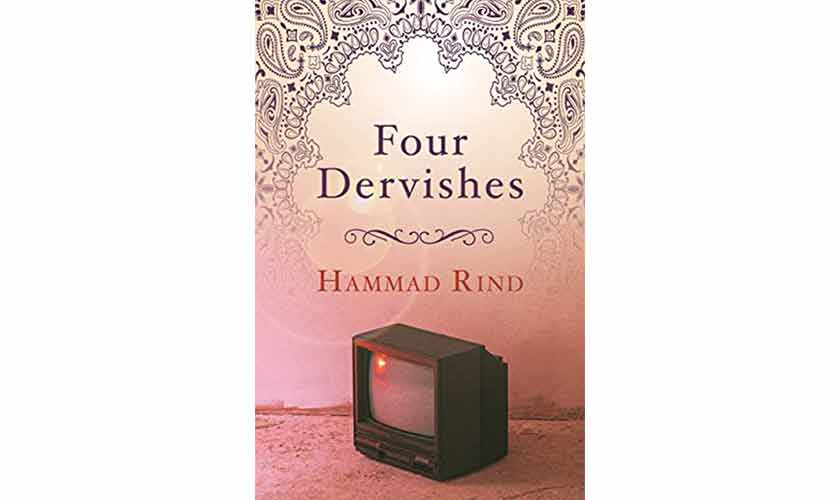 our people gather in a cemetery to tell stories of a night during a power outage. Sound too familiar? Except that they find themselves in a mysterious land where magic excites and terrifies all witnesses.

If someone had told me that one day I would read an article about the rise of vampires in the Balkan states during the month of Savan; or I had become a follower of the Pak-Nak Khatun or Our Lady of the Sacred Nose whose beauty was in the same vein as Ava Gardener, Nahid Akhtar and the Queen of Sheba; or I would find myself reading about Karbala only to leave myself lusting after a title like the Verdi of Woe not so much for the Fabergé egg but to stumble upon manuals such as Bury Your Own Dead For Dummies; or that – and I thought that was great – that knees were the new neckline, I wouldn’t have believed it.

All of this and more happens in four dervishes as Hammad Rind weaves together various strands from around the world to create beautiful prose that leaves one wondering how he does it. Adopt a technique close to the traditional daastaan and a Chaucerian style, he skilfully interweaves cultural elements, transcending geography and other markers of identity. Take for example: huqqa, qalyan, hookah, clay, Karim Khan, lula, hubble-bubble, pleasure-pipe – whatever it’s called, it’s every connoisseur’s first choice; men, women, caterpillars, princes and of course lovers (p. 60).

It is as if all man-made borders and differences melt away, leaving behind a spellbinding universality. For example: “she would gobble sweets – Multani Sohan, Dehlavi qalaqand, Khushabi dhodha, Shahpuri patisa, Gazaintep baklava, Bengali rosho-gulla, Yorkshire parkin, Isfahani gaz, Occitan nougat, Florida key lime pie, Mesopotamian carasucia, Manila halo -halo , Eton mess – all day long”. One could point out that it’s time travel and around the world, but it’s more of an afterthought when you’re just dying for something sweet. And that’s the beauty of four dervishes.

It’s not easy reading as it commands all the attention given the fantastical creation of a land where the ancient meets the mundane – like Mrs. Kennedy and the Camel-Man. But there, in the company of Freddy, Leila and Zoltan, the dazzling array of characters who amuse and fascinate, we almost forget the daily power cuts.

One wonders what prompted Rind to write a novel full of references covering different regions, cultures and time periods. Was it a product of nostalgia or a marriage between his past and his present? “There is definitely some nostalgia; there is his role,” he says. “For example, I open the novel with an episode about shedding, an experience shared by all Pakistanis, followed by a detailed description of a character inspired by many PTV dramas I watched as a child. I’ve always been a voracious reader and my reading interests are quite eclectic, so it was natural to write something with a wide variety of references. open a window to search or encourage you to search for them or inquire about them.This way you also establish a personal connection with the work.

They say that when authors write their first book, they tend to get into it, some even mine their lives to get into it. Rind seems to agree. “You can’t escape so there is a bit of me in my book, for example, my passion for languages ​​comes back from time to time. There are also a few observations or anecdotes, for example the story of the marsiya-khwanthat my grandmother used to tell us about her grandfather, who was Zakir-i-Ahle Bait. However, I would not call four dervishes a biographical work because I didn’t rely much on my personal experiences in my writing.

Rind writes in the style of oral history or dastaan. And yet, there is something of Chaucer in his narration. It apparently takes what is mostly Eastern-inspired culture and tells it in a different style. He thinks the two traditions of storytelling have connections that are sometimes not very obvious. “The dastaan, which had Indian and Persian roots, entered the Arabic literary tradition during the Abbasid era. He then influenced European literature – for example, the cycle of Renaissance stories Decameron of Boccaccio and the Spanish epic novel Don Quixote by Cervantes, widely regarded as the first novel in European literature, both show clear influences from the various countries of the East. dastaanas Thousand and one Night. In fact, Cervantes attributes the novel to a fictional Arab Muslim, Cide Hemete, who could be a Spanish form of Seedi or Sayyid Hamid.

Magic realism and satire are two genres that many can only dream of writing. It’s clear that Rind enjoys taking elements of certain cultures and parodying them. Knees! Who knew knees could arouse such passion! Or that the hug of the trees could be taken on a literal level. He says it was a long process and those observations and thoughts had baked into his mind before he picked up the pen to put them down. “I’ve always enjoyed satire and found it to be a very effective tool for delivering social criticism. Rabelais says that laughter is proper to man (and to woman, I might add). In my formative years I read quite a bit of satire in Urdu, English and French from Swift, Insha and Voltaire and the absurd humor of Monty Python is personally my favorite type of comedy. All of this may have influenced my writing style.

In our age when business literature is in demand, there is very little room for detailed prose. Yet Rind focuses on the smallest details, weaving them together to create a beautiful tapestry that leaves you in awe. “My goal was to be sincere in my writing style and in what I felt was true to me or my craft. I loved, and still love, getting down to detail. I love to read stories that go off on tangents. Arabian nights is an example of this type of story. Tristan Shandy is another. It’s so full of digressions that the novel ends before it even started… I knew that I was also telling a story and although you can add colors, references and asides to it, you have to go back to the real story.

Rind is currently working on the Urdu translation of the first collection of poetry knotted grief by Naveen Kishore for Zuka Books. He is also working “very slowly on my second novel,” which deals with issues of diaspora and identity. Additionally, he runs a few creative writing workshops for refugees and other vulnerable groups for a charity in Wales.

The reviewer is a Lahore-based author and editor

Morocco’s mistreatment of migrants denounced to cheers from Spain | New