Newly ordained Auxiliary Bishop Michael Woost is in Rome to attend the formation course for new bishops. Depending on his time, he plans to send photos and regular updates on the program. Below is the second part.

Greetings from Rome on September 14, Feast of the Exaltation of the Holy Cross, and Day 2 of the New Episcopal School. 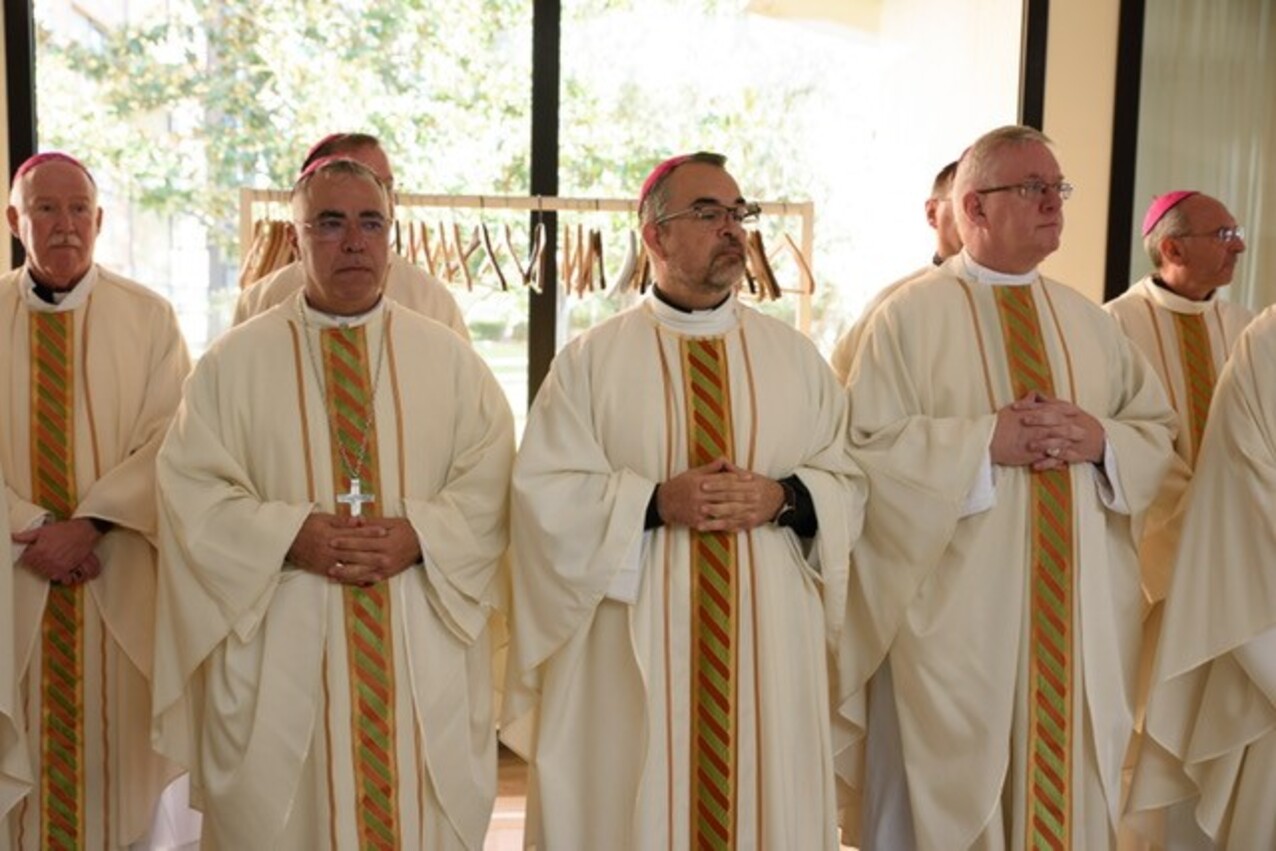 Today’s schedule started at 7:30 a.m. with mass combined with morning prayer. Cardinal Mauro Gambetti, OFM presided over and preached the Eucharistic liturgy. Mass this morning was celebrated in Italian, Latin, Spanish and English. Like yesterday, breakfast followed at 8:30 a.m.

The Dicastery of Bishops has titled today’s theme “The Church in postmodern society after the pandemic”. From 10 to 11 a.m. we gathered in the auditorium for a talk by Msgr. Tomas Halik, priest from Czechoslovakia, professor of sociology at Charles University in Prague, pastor of the university parish of the Church of St. Savior in Prague and president of the Czech Christian Academy. He has lectured on topics of philosophy and theology at many colleges and universities around the world.

Msgr. Halik presented “Thirty-three Theses on the Church in a Time of Epochal Change”. Luckily for me, he taught in English. It was scholarly, challenging and profound. I felt like I was in the lecture hall of a doctoral program at a university. 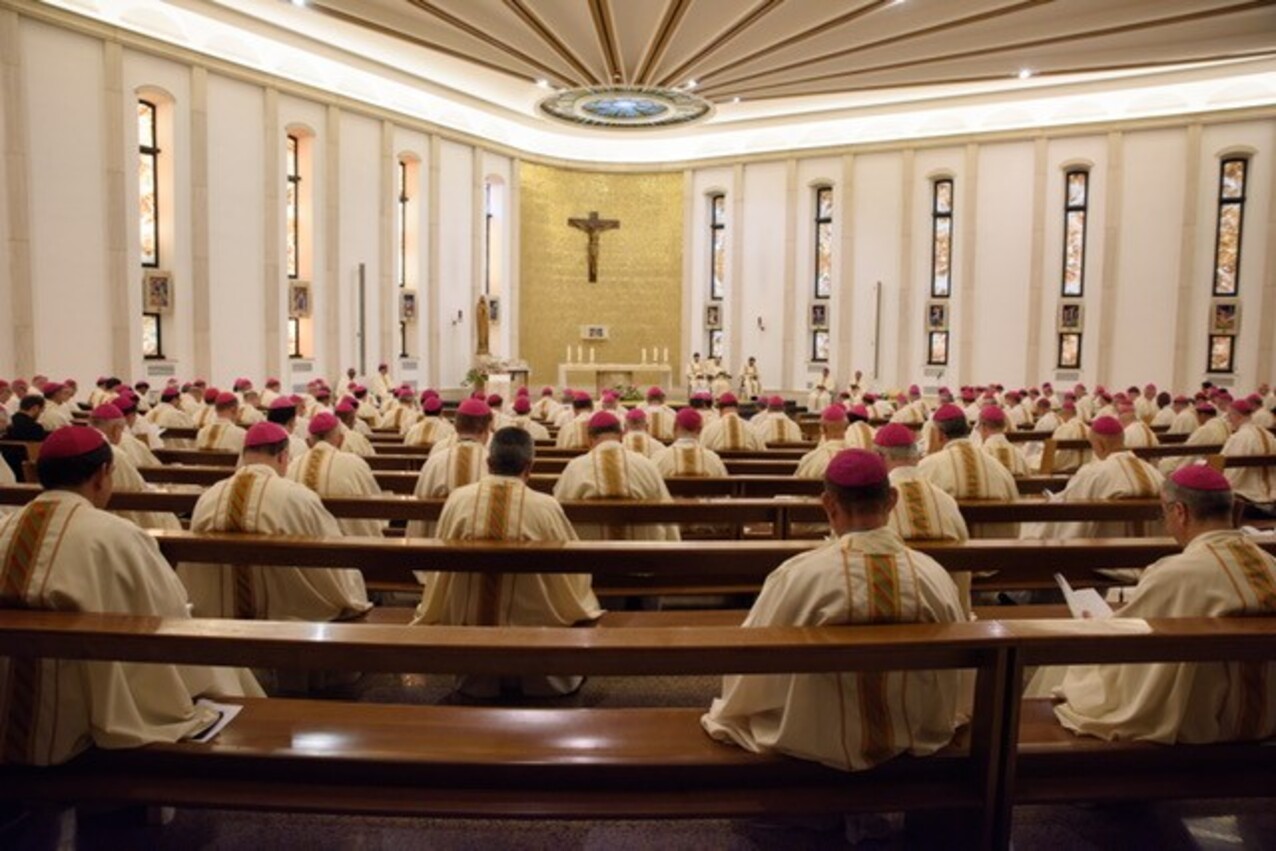 Inspired by the writings of Pope Francis, Msgr. Halik noted that we live in a time of change. The moral and cultural environment is changing in our secularized world, and not for the good. Social conditions and the lived experience of individuals and communities are changing dramatically, as evidenced by ongoing global conflicts, the migration of massive amounts of people, the ever-present plight of the poor, and so on. Institutions and leadership expertise are suspect and often overlooked, including religious institutions and leaders. This is the world in which the Church has been called to preach the gospel and to pursue the mission of Jesus. With the state of the world as it is, Msgr. Halik indicated that the Church faces two dangers – “on the one hand, uncritical conformity to the spirit of the times (i.e. ‘reliance on public opinion public opinion, ideologies, prejudices and stereotypes’), and on the other hand, ignorance of the signs of the times (i.e. the revelation of the presence of God in the world and in our daily life) He reminded us that in such an environment, we must hold fast to Jesus’ warning: “Do not be afraid! 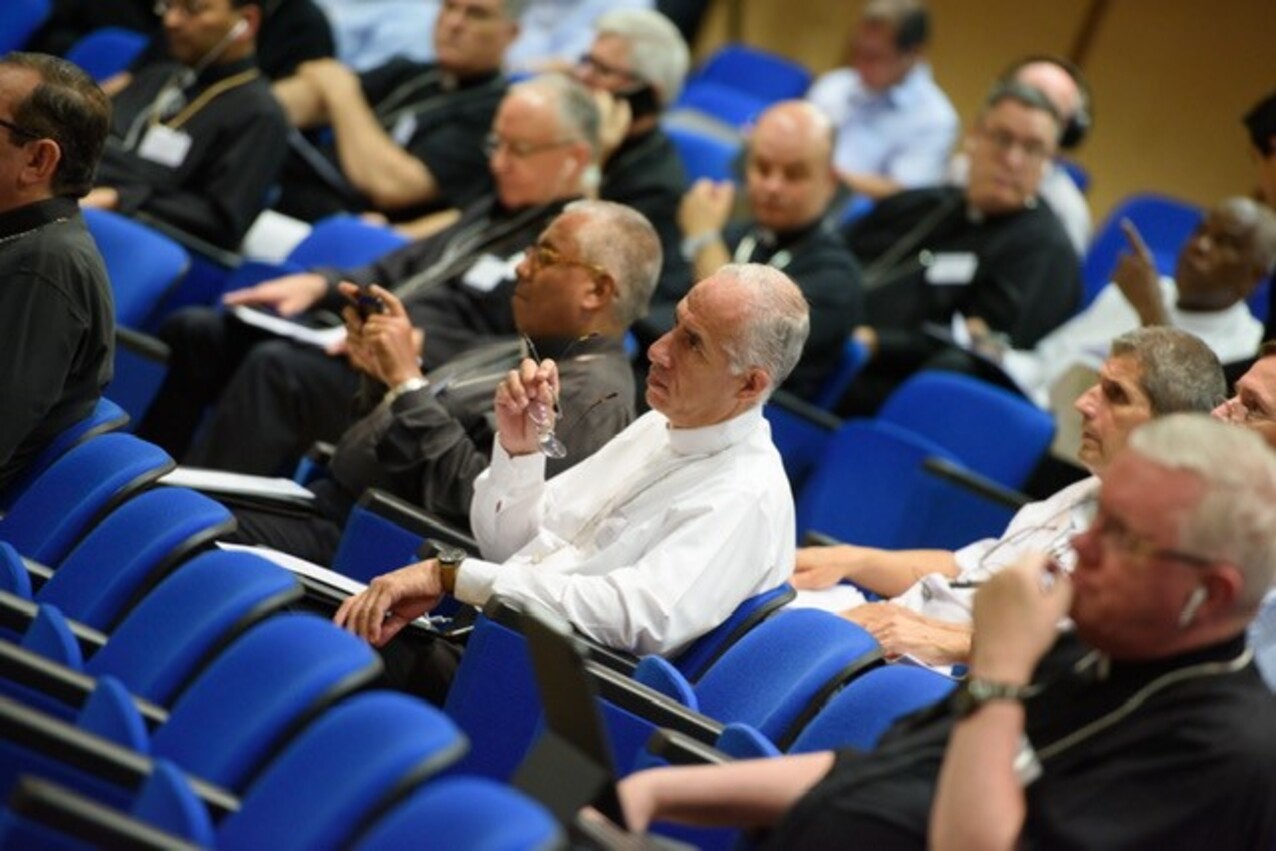 Like the presenters on September 13, Msgr. Halik stressed the importance of the synodal process. He offered a broad theological and sociological analysis of the “signs of the times”. In order to properly discern the authentic signs of God’s action in today’s world, he noted the need for a deepening of the spiritual life, of dialogue with the different groups within the Church and communication with other Christians, other religions and the marginalized of society to build understanding and work for the common good. Synodality must lead us to seek the mystery of the presence of God in the heart of each person.

Following Msgr. Halik’s lecture, we had a 30-minute break. Afterwards, we returned to the auditorium for a 45 minute question period and further discussion with Msgr. halik. This allowed the bishops to reflect on their own experience of changes in the religious, social, cultural, economic and political dimensions of their home dioceses. These exchanges provide important insight into what is happening in the global church.

Fortunately, we had lunch at 1 p.m. following this discussion, then a two-hour break.

The afternoon session began at 4:00 p.m. with evening prayer in the chapel, after which we met again in the auditorium for two presentations. Bishop Carlo Roberto Redaelli spoke for about an hour about “the canonical experience for the administration of a diocese”. As you might guess from the title, Bishop Redaelli is an expert in Church law. He reviewed parts of canon law, as well as theological and pastoral principles, to which bishops should pay attention in the administration and conduct of their dioceses. The most interesting part of our time with him came after his conference when newly appointed bishops leading their dioceses began asking him questions based on their experiences as new bishops. The Church is universal, as are its concerns, issues and challenges. Archbishop Redaelli concluded his remarks by reminding us that as Bishops we must never forget the goodness of God, the importance of charity towards all and the need to laugh – even at ourselves – often. 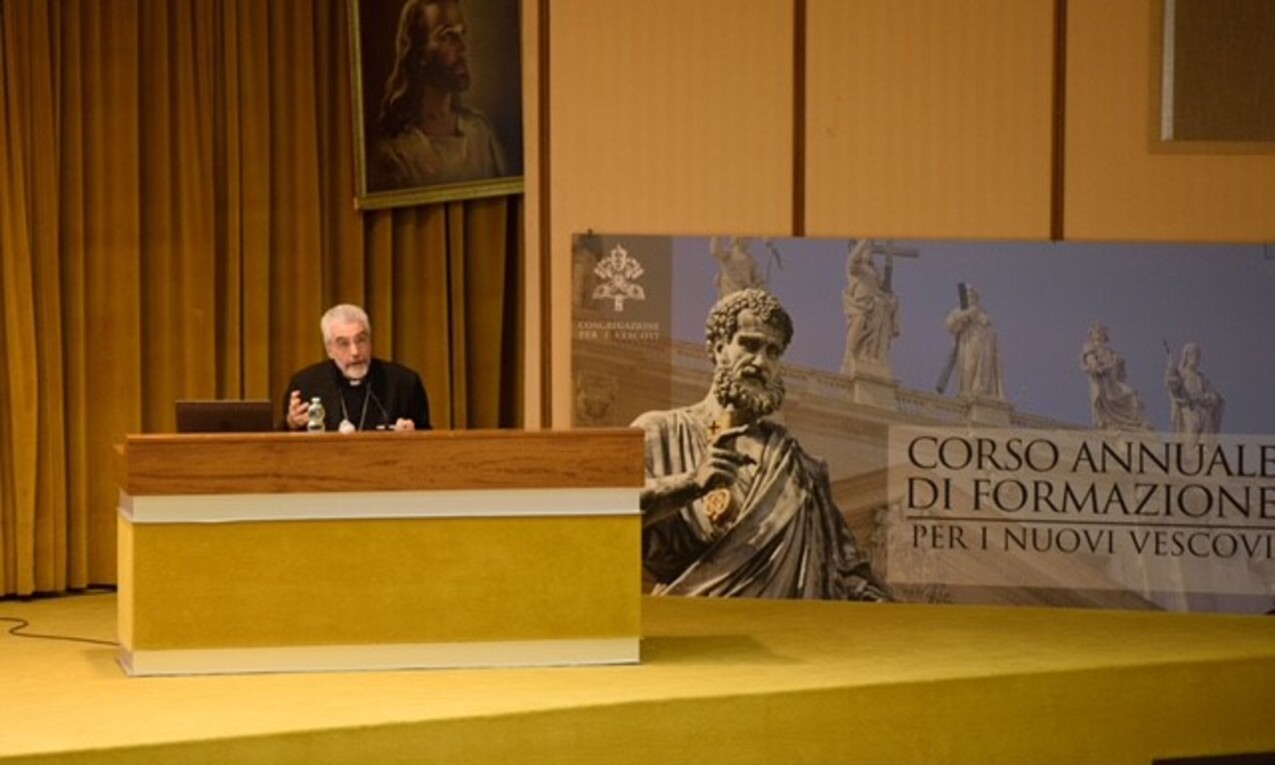 After another 30 minute break, we returned for a presentation titled “Living in the World of Media Beyond the Technocratic Paradigm”. This was presented by two members of the Vatican’s Communications Dicastery, Natasa Govekar and a press officer who read an article by Paolo Ruffini, the Dicastery’s prefect, who is traveling with Pope Francis to Kazakhstan. They spoke for approximately 50 minutes and described the Dicastery’s approach to announcing the Gospel message through contemporary media. They emphasized that the Church’s vision of communication is based on building communion among peoples. It’s not just about making statements, but about deepening relationships. This is how, they said, the Church attempts to discern technological advances in media and communications through the prism of our religious tradition. While technology and various forms of social media and communication have had a positive impact on people around the world, they noted that these advancements cannot provide the ultimate means of engaging the mystery of God, one of which is participation in the liturgy of the Church, in particular the celebration of the Eucharist. (Yes, I was practically out of my seat jumping for joy!) The 45-minute question and answer period mainly focused on the bishops’ concerns about the live streaming of Masses even after the pandemic recession. and how to invite all of our people back to church. celebrations.

After that conversation, we moved to the dining room for dinner at 8 p.m.

Back in the auditorium at 9:10 p.m., we had an hour-long presentation and conversation with a member of the Dicastery for the Eastern Churches who described to us the struggles of many Eastern Rite Catholics around the world. Specifically, he described how the war in Ukraine is impacting the life of the religious community there. He also spoke of the difficulties faced by the Eastern Churches in the Holy Land and in India. He told us that a number of new Eastern Rite bishops attended last week’s training session, so there were none this week. However, he encouraged us to reach out to the Eastern Bishops in our own regions and learn from them firsthand about the gifts, blessings and challenges of the Eastern Churches in our part of the world. 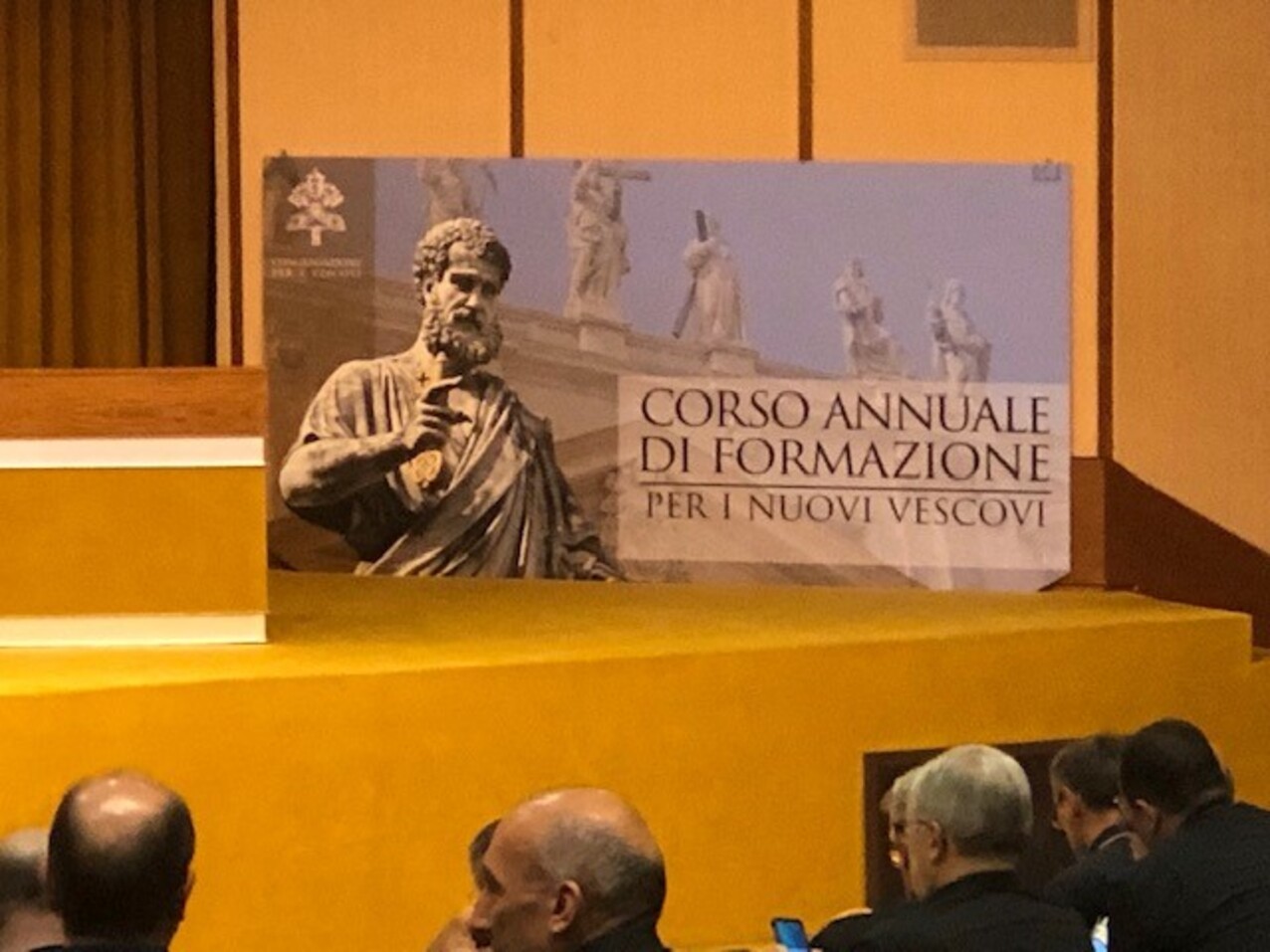 Until tomorrow, know that I keep you all in prayer and that I remember our diocesan community in the celebration of the Eucharist here in Rome. May God bless you and your families in a special way as we celebrate the Exaltation of the Holy Cross, our peace and our hope of salvation.

British and Spanish royal families, relatives in dispute over Gibraltar…