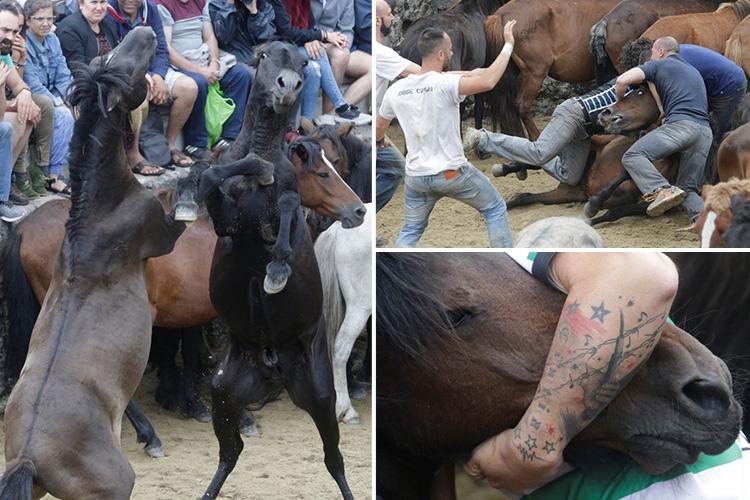 BURLY men battled hundreds of wild horses on the streets of a sleepy Spanish village during the bizarre Rapa Das Bestas festival.

The 400-year celebration – known as the shearing of the beasts – takes place every summer in Sebucedo, in the northwestern region of Galicia.

He pits wild horses, living free in the mountains, against inhabitants eager to show their strength by dragging the beasts to the ground and trimming their manes.

The festival, which has drawn criticism from animal rights activists in the past, began as a way to check horses for disease and cut their hair to keep them cool during the warmer months.

But it has become a tradition that now draws thousands of people to the small village, about 30 miles from Santiago de Compostela.

The horses come from the mountains of Galicia, where they roam freely the rest of the year.

For three days, around thirty local Aloitadores, or “fighters”, have to fight with the horses using nothing but their hands.

No tools or ropes are allowed.

Three men are needed for each horse – one jumps onto the horse’s back while another clings to its neck.

The third then grabs the tail and helps the other two drag it to the ground.

They risk being trampled or crushed when pushing the horse to the ground in order to mow it and trim its mane and tail.

Each year, dozens of residents need medical attention after being trampled, kicked and even bitten by horses.