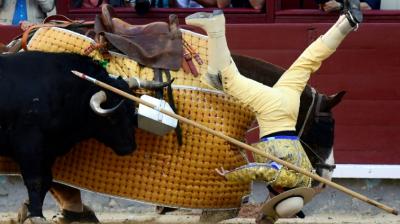 The acclaimed and contested bullfighting â€œritualâ€ of Madrid.

When the bull collapses and dies in front of the matador, silence settles on the bullfighting arena in Madrid, a “ritual” that its French manager Simon Casas defends with vigor in an increasingly conflictual climate.

Around 500,000 enthusiasts are expected in the bullring of Las Ventas in Madrid during the Feria de San Isidro, the biggest bullfighting festival in the Spanish capital.

But today more than ever, activists and politicians are getting involved as regional and municipal elections loom on Sunday. The outgoing left-wing mayor of Madrid has promised “corridas” (bullfights) “without blood or death”.

But conservatives and the far right are defending a â€œtraditionâ€ associated with Spanish identity. To make their point of view, they enlisted three “toreros” (toreros) as candidates in the general elections in April.

â€œI don’t know anyone who loves the fighting bull more than the bullfighter,â€ says Casas, a 71-year-old former matador, as he walks through Las Ventas, built in 1929. It â€œis never an enemy to the bullfighter but a glorified partner. “

In a corral adjacent to the ring, visitors measure these “fighting bulls” raised only for fighting and sometimes weighing more than 600 kilos.

â€œIf I had to be an animal, I wouldn’t want to be a kitten or a doggie but a fighting bull,â€ says Casas. “I would die, yes, but … I would make my fate glorious.”

Every day, the representatives of the bullfighters draw lots for the bull that will face each matador that evening in a solemn ceremony which consists of taking papers out of a hat.

“This is how we’ve been doing since the 19th century,” says Casas. In his office, paintings and photos pay homage to the bullfighters killed by the bulls: Joselito in 1920, Manolete in 1947 …

Before a fight, rare are the matadors – these toreros charged with killing the bull – who do not go through the chapel of Las Ventas to pray. Nearby, two operating theaters are available for injured bullfighters.

As for the bull, it will die unless it receives an extremely rare forgiveness – “because you have to go all the way, otherwise it becomes a performance and not a ritual”, explains Casas.

Bullfights that involve killing the bull in the arena are legal in Spain, part of France, Mexico, Colombia, Peru, Venezuela, and part of Ecuador. In Portugal, it is illegal but the bull is shot afterwards.

He killed him badly

On this spring day, the ring road of Las Ventas is full of nearly 24,000 people. “Long live Spain” shouts the crowd as former King Juan Carlos I joins the spectators. First of all, the bull is weakened by bullfighters who drive pikes and “banderillas” – colored darts – into it, spilling blood into it.

Then a fanfare of trumpets announces the entry of the matador who has 10 minutes to finish the bull. â€œOlÃ©! ” “Good!” The matador is applauded when he manages to draw the bull in a circle around him, standing near his horns.

Suddenly thousands of white handkerchiefs go up in the audience: “a bull was very valiant, he was killed instantly, the public asks for an ear” as a reward for the bullfighter, explains Antonio Mercader, 54-year-old economist and enthusiast .

Onlookers hiss with disapproval at another matador because “the bull is in too much pain,” adds his wife, Paqui Fernandez, with a grimace. “He killed him badly.

The “art of killing”

In protest for “the abolition of bullfighting”, activists estimate that some 200 bulls will be killed during the Feria de San Isidro, and thousands across Spain this year.

Calling the bullfights a “display of cruelty”, author Manuel Rivas published an opinion piece earlier this month calling on Spain to give up the “art of killing”.

However, bullfighting, which is part of Spain’s cultural heritage list, seems untouchable. Its ban in Catalonia in 2010 was overturned by the Constitutional Court. In practice, however, bullfights no longer take place in the northeast region, nor in the Balearic and Canary Islands.

In 2008, 810 bullfights took place across Spain. Ten years later, they were down to 369, according to the Ministry of Culture. “Don’t let bullfighting run dry,” pleads this year’s poster for San Isidro.

It is a poster that seduced Eladio Galan, a 25-year-old pharmacist who wonders if bullfighting will still exist in 30 years. “I have friends who are indifferent, others who say to me: ‘you are heartless’.”