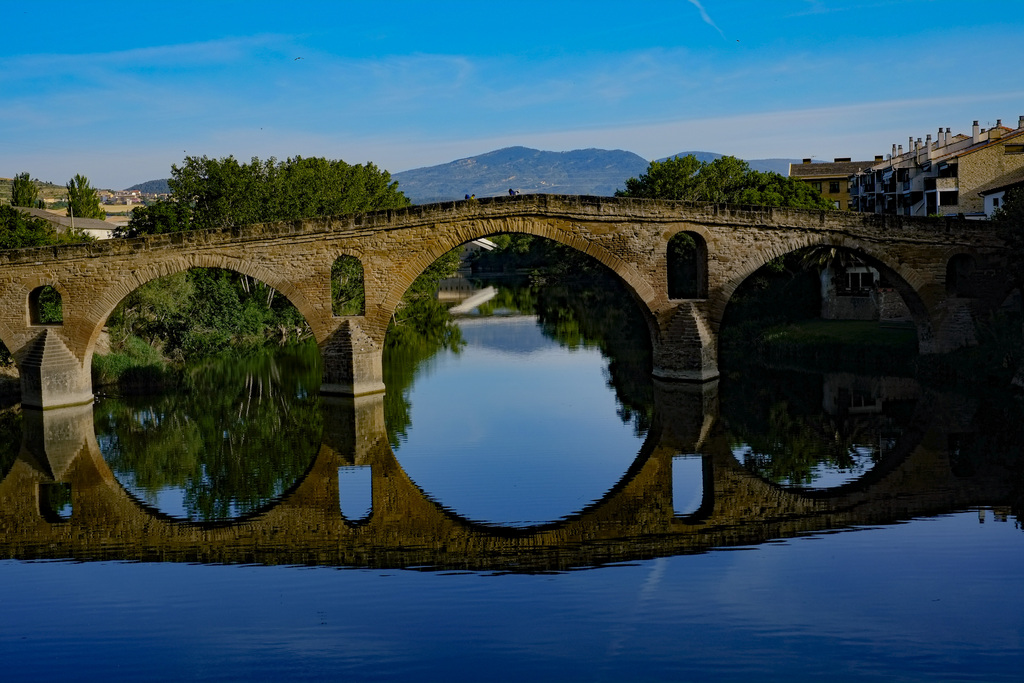 TERRADILLOS DE LOS TEMPLARIOS, Spain – Amidst Spain’s vast grain fields, a medieval church stands guard over the handful of adobe houses where around 50 people live – and twice as many travelers along the Camino de Santiago spend the night this summer.

Terradillos de los Templarios, and dozens of similar villages, were built to accommodate medieval pilgrims traveling the 800 kilometer route through Spain to the tomb of the Apostle James in Santiago de Compostela. Today’s Camino travelers save them from extinction.

“It’s village life,” said Nuria Quintana, who runs one of Terradillos’ two pilgrimage hostels. “In winter, when no pilgrims pass, you can walk through the village 200 times without seeing anyone.”

In this hamlet named after a medieval chivalric order founded to protect pilgrims, and all along the route, the return of travelers – after the disruptions linked to the pandemic – contributes to restoring the means of subsistence and the vitality of villages which steadily lost jobs, people, and even their social fabric.

“If it wasn’t for the Camino, there wouldn’t even be a cafe open. And the bar is where people meet,” said Raúl Castillo, an officer with the Guardia Civil, the law enforcement agency that patrols Spanish roads and villages. He spent 14 years in Sahagún, 13 kilometers away, from where agents cover 49 hamlets.

“The villages next door, off the Camino – they make you cry. The houses are falling, the grass is growing on the sidewalks up to here,” he added, pointing to a table.

From the mountains of the Pyrenees on the border with France, across hundreds of miles of sun-roasted Spanish plains to the mist-covered hills of Galicia rolling towards the Atlantic Ocean, towns of farmers and ranchers once booming have begun to hemorrhage in recent decades.

Often the same goes for large churches full of priceless works of art – the legacy of medieval and Renaissance artists brought by prosperous bourgeois, said Julia Pavón, a historian at the University of Navarre in Pamplona. , the first big city of the Camino.

But starting in the 1990s, the Camino regained international popularity, with tens of thousands of visitors walking and cycling each spring, summer and fall. After a severe dip amid the pandemic in 2020 and the start of a recovery with mainly Spanish pilgrims in 2021, 2022 looks like the “last” year, as Quintana put it, with over 25,000 visitors just in May on the most traditional route, the “French way”.

With daily visitors outnumbering locals in the smaller hamlets, the impact is enormous.

“Now all that works (in town) is the hospitality industry,” said Óscar Tardajos, who was born on a farm along the Camino. For 33 years he ran a hotel and restaurant in Castrojeriz, a stone-built hillside village that was a center of the wool trade centuries ago when its half-dozen churches were destroyed. built.

The Camino helps create jobs and maintain cultural heritage, said Melchor Fernández, professor of economics at the University of Santiago de Compostela. “It has curbed depopulation”, which is 30% higher in Galician villages off the Camino.

While most pilgrims only spend around 50 euros (dollars) a day, it’s still local.

“The bread in the Pilgrim’s sandwich is not Bimbo,” Fernández said, referring to the multinational. “It’s from the bakery next door.”

In Cirauqui, a hilltop village in Navarre, the only bakery survived because dozens of pilgrims stop there daily, baker Conchi Sagardía said while serving a pastry and juice to a pilgrim from Florida.

Besides the pilgrims, the main customers of these shops are the older inhabitants of the villages, where few young adults live.

“In the summer, grannies sit along the Camino to watch the pilgrims go by,” said Lourdes González, a Paraguayan who has owned the Redecilla del Camino cafe for 10 years. Its only street is the Camino.

His concern — shared widely along the route — is to keep that unique pilgrim spirit alive even as the popularity of the Camino leads to greater commercialization.

In more and more cases, the iconic yellow arrows lead to bars or foot massage businesses instead of the Camino. On a recent morning in the town of Tardajos, Esteban Velasco, a retired shepherd, stood at a crossroads pointing out the correct route to pilgrims.

“The Camino would have no reason to exist without the pilgrimage,” said Jesús Aguirre, president of the Association of Friends of the Camino de Santiago in the province of Burgos. “You can do it for different reasons, but you keep soaking up something else.”

For many, it is a spiritual or religious quest. The push to keep churches open to pilgrims also revitalized parishes, rapidly secularizing Spain.

The 900-year-old Church of Santa María in Los Arcos is one of the most magnificent of the Camino villages, with a soaring bell tower and an intricately carved altarpiece. Pilgrims often double the number of those attending weekday Masses, Reverend Andrés Lacarra said.

In Hontanas, a group of stone houses that suddenly appear in a dip after a trek across the vast plains of Castile, there is only Sunday mass, as is often the case when a priest covers several parishes.

But on a recent Wednesday evening, the church bells rang with delight – Reverend Jihwan Cho, a priest from Toronto on his second pilgrimage, was about to celebrate the Eucharist.
“The fact that I was able to celebrate Mass…it made me really happy,” he said.

International pilgrims like him are making some cities increasingly cosmopolitan.

In Sahagún, the English teacher asks Nuria Quintana’s daughter and her classmates to follow the pilgrims and practice their language.

Villagers called him ‘crazy’ when in 1990 he opened the inn and restaurant where, on a recent afternoon, two farmers on tractors had a quick coffee alongside a group of cyclists from the Netherlands to Santiago.

“Now you see people I never saw when I was little, of all nationalities,” said Loly Valcárcel, owner of a pizzeria in Sarria. It is one of the busiest towns on the Camino, as the distance required to obtain a “certificate” of completion in Santiago is exceeded.

She runs a bed and breakfast with her Cuban husband, a former pilgrim, near the city’s open-air museum retracing the history of the ancient route. Herreros hopes the village will continue to thrive – but without entirely losing the “absolute freedom and solidarity” of its childhood.

A handful of pilgrims passed by when she was little. Now “the amount of people almost scares you to go out on the street,” she said as she walked out of her restaurant to buy fish from a truck – a common replacement for groceries in many villages.

But she quickly added: “Without the Camino, we would start to disappear again.”

Associated Press religious coverage receives support through the AP’s collaboration with The Conversation US, with funding from Lilly Endowment Inc. The AP is solely responsible for this content.