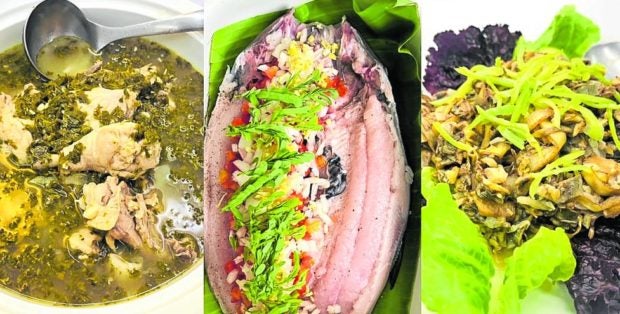 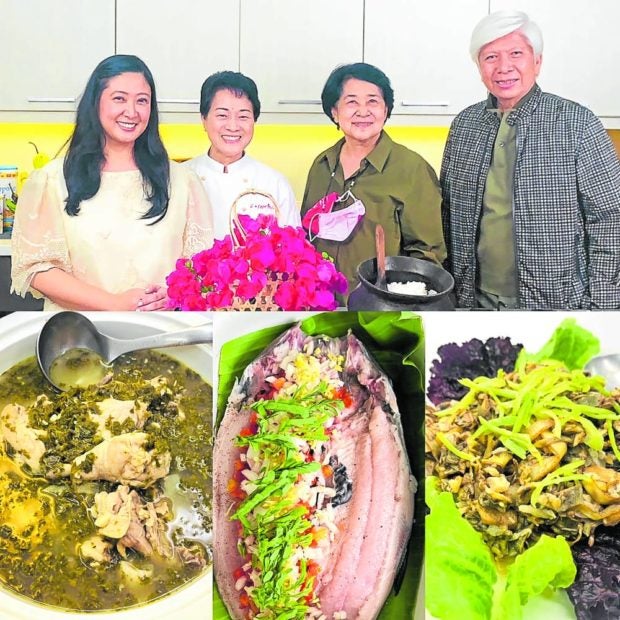 On Friday, I had the joy of hosting the first episode of Maya Kitchen’s online Philippine Food Tour series with chef Jessie Sincioco. The first stop on the Filipino food tour was Bulacan, so Maya selected Chef Jessie from Angat and yours truly from Sta. Maria (by the way, we’re from the same neighborhood!). What a treat to step back in time and remember the dishes we grew up with and taste Chef Jessie’s version of her family’s comfort food!

I have repeatedly written about Sta. Maria, so this time I’m going to share what I learned from Chef Jessie about Angat.

Angat is north of Sta. Maria and right next to the Sierra Madre mountains. Chief Jessie noted that because their town is right next to the Angat River, the soil is very fertile. She grew up with many trees in their garden and their menu just depended on what was ready for the picking. It’s a practice she has continued to this day, with the acute ability to identify trees even around an urban neighborhood, and quickly jot down what to pick for the day’s menu.

For Bulacan’s Philippine Food Tour, his menu started with a warm banana flower salad or, in Filipino, kilawing puso ng saging. (You can find all the recipes on The Maya Kitchen’s Facebook page.) She peeled back the layers of the banana flower until it reached the “young” inner part, which was then simply cut into strips. , soaked in brine for a few minutes, drained then cooked with sautéed garlic and onion, fish sauce and vegetable broth. Interestingly, while kinilaw primarily refers to a raw seafood dish, in Angat, kilawin is made from banana flowers and can be a purely vegan dish!

Another staple of Bulacan cuisine is inihaw na bangus or grilled fish. I admit that the first time I heard that she would prepare this, I thought it was too simple to even make a demo. But like any work of art, the simplicity is more apparent than real! Many details go into this seemingly simple dish. First, of course, you need to have good quality bongs. Second, you open the bangus to stuff the inside with whatever makes it even more delicious than it already is on its own: tomatoes, onions, ginger. Chef Jessie also added sampaloc leaves. Then you wrap it in banana leaves and foil and cook it over charcoal. The result is a juicy fish with layers of flavor and exceptional juice.

Back in our kitchen at Sta. Maria, I remember that Nana Meng, my great-aunt, was very particular about cooking with wood rather than gas. She noted the difference in flavor. For this demonstration, Chef Jessie used a smokeless indoor charcoal grill, so even if you live in a condo, you can perform this dish!

The star of the show was the sinampalukang manok or chicken tamarind soup. This is similar to sinigang, a sour soup with pork, chicken or fish, but for this particular version the souring agent is tamarind – its fruit and leaves. This dish is a comfort food from both Angat and Sta. Maria and I remember it very well on our family table, sometimes with frog legs instead of chicken.

Finally, Chef Jessie served flan de leche, a quintessential Filipino dessert not only in Bulacan but across the country. Chef Jessie noted that at one house in Bulacan we use dayap to break up the sweetness of flan de leche. Dayap bark is used as a finishing touch to the dish. Then, as a personal touch, Chef Jessie added vanilla and for presentation, added a beautiful rose-shaped mango cutout.

Flan Leche is something we Filipinos inherited from the Spaniards, who had been here for over 300 years. It is said to be one of the dishes that became popular when egg whites were used for the construction of Spanish churches, hence the need to create something so that egg yolks would not be not wasted. Thus, desserts such as flan de leche and tocino del cielo have become very popular.

While cooking, Chef Jessie and I reminisced about our respective childhood dishes from our hometowns. She mentioned binayabas, which are yet another kind of sinigang but whose souring agent is guava; also one of my favorites growing up. His memories also include pinapatisan, which is simply meat cooked in fish sauce (patis).

Meanwhile, I had to give credit to our neighbor, Marilao, for the delicious kakanin or sweet rice cakes they offer, including many varieties of suman, bibingka malagkit, fir-fir and more. Chef Jessie, however, noted that Angat also makes a delicious fir-tree which is not multi-coloured but simply white but with incredibly delicious layers, a masterpiece by her own mother, Carmen.

In San Miguel, another town of Bulacan, you will taste the most delicious pastillas de leche. And in my hometown of Sta. Maria, we are very proud of our full bacon chicharon and I am very proud of my great-aunt’s tsokolate or hot chocolate, also called Carmen or Nana Meng. This tsokolate is distinctly made with pure cocoa and ground peanuts.

Now that we can go out – and hope it lasts – maybe you can now take a foodie tour, not just virtually but “in real life” of Bulacan! Incidentally, the Vatican has generously extended the grant for the plenary indulgence when visiting a church with a holy door until December this year and there are many historic churches in Bulacan. We are a province of food and faith, so you can be sure that your pilgrimage route will also include delicious food stops! Long live Bulacan! INQ

All the recipes for Chef Jessie’s Angat dishes are on Facebook.com/Mayakitchen.