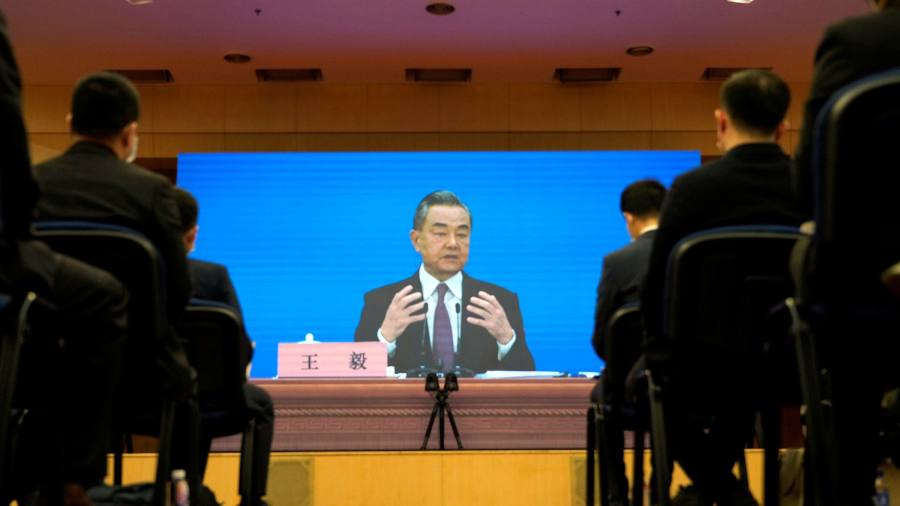 China warns of retaliation if hit by Russian sanctions fallout

China fears being hit by Western sanctions imposed on Russia for its invasion of Ukraine and will retaliate if necessary, according to the country’s foreign minister.

“China is not a party to the crisis, nor does it want sanctions to affect China,” Wang Yi told his Spanish counterpart, José Manuel Albares, in remarks released by China’s Foreign Ministry on Tuesday. .

“China has the right to safeguard its legitimate rights and interests,” he added.

A series of tough sanctions put in place by the United States and its allies have hit stock markets around the world and sent the cost of some commodities, such as oil and wheat, skyrocketing. China is a major importer of Russian energy and agricultural products.

Chinese stocks have been particularly hard hit, with Chinese stocks listed in Hong Kong on Monday falling the most since the 2008 global financial crisis.

The sale accelerated following a Financial Times report that US officials believe China has responded positively to Russian requests for arms and military assistance. Beijing has hit back at what it calls US efforts to spread misinformation and “distort and smear” its stance on the war in Ukraine.

President Xi Jinping and other senior Chinese officials have insisted that Beijing is a neutral party, but they and state media continue to repeat and reinforce Russian justifications for its invasion.

In another reflection on the Chinese government’s de facto support for President Vladimir Putin, who met Xi in Beijing weeks before the invasion, on Tuesday, a US organization that published a Chinese academic’s critique of the war said that one of his websites had been blocked. in China.

The article by Hu Wei, a Shanghai-based political scientist affiliated with the State Council Research Office in Beijing, was first published March 12 by The Carter Center in Atlanta.

“Russia’s ‘special military operation’ against Ukraine has caused great controversy in China, with its supporters and opponents divided into two implacably opposing camps,” Hu wrote in what he described as a ” objective analysis” of the situation in Ukraine and its potential. consequences for China.

Hu was highly critical of Putin’s war, calling it an “irreversible mistake” from which China should immediately dissociate itself. “The main thing,” he said, “is to prevent the United States and the West from imposing joint sanctions on China.”

“China cannot be tied to Putin,” Hu added. “China can only proceed by safeguarding its own interests, choosing the lesser of two evils and offloading the burden from Russia as soon as possible.”

He added: “At present, it is estimated that there is still a period of one or two weeks before China loses its breathing space. China must act decisively.

The Carter Center said it did not commission the article, which Hu submitted. Hu was not immediately available for comment.