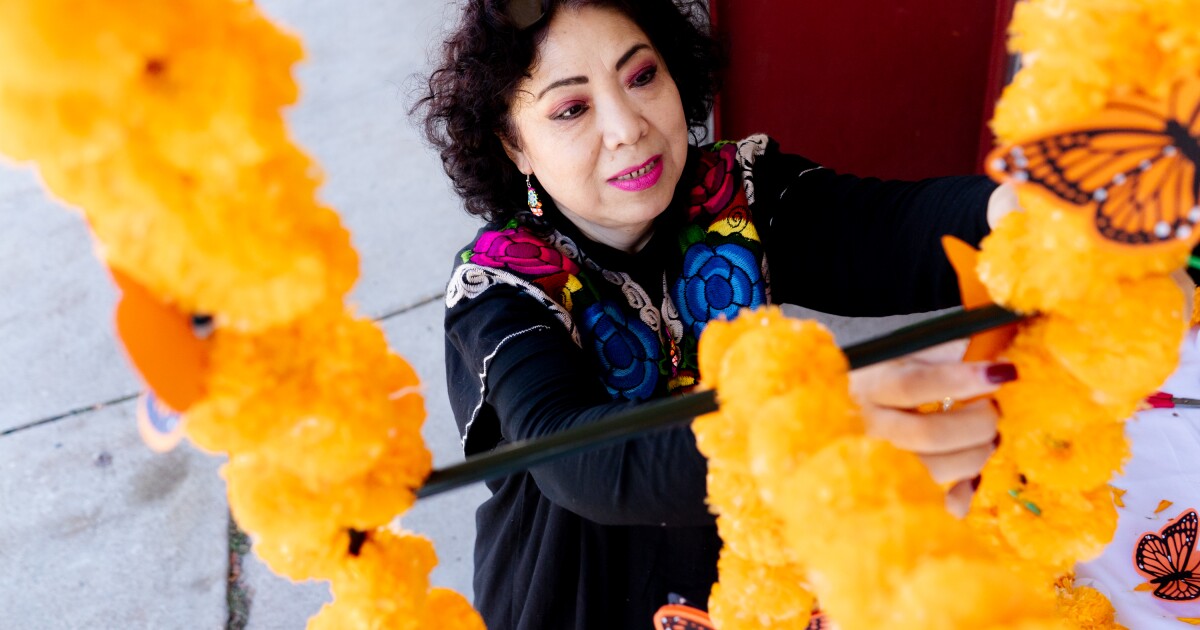 Chocolate, tamales and pulque: St. Louisians honor the dead at the Day of the Dead public altar

“We are going to drop off chocolate for the children, fruit and their takis,” she whispers in Spanish. “Pulqued for my father, his cigars too.

Seitz, 52, is one of millions honoring loved ones who died during El Dia de los Muertos, or Day of the Dead. The largely Mexican tradition is usually observed from October 31 to November 2 and is celebrated with intricate displays of photographs and offered — offerings to the spirits of those who have died, such as favorite drinks, sweet breads and tamales.

Seitz hosts his inaugural community altar outside his store, Arte Rojo STL, at 5208 Hampton Ave. Community members can add a small photo of their deceased loved ones to the altar or leave a offered.

Brilliant flowers she found hours away in rural Missouri, picado paper and the pan de muerto, everything on the altar has meaning, says Seitz.

An arch adorned with cempazúchitl flowers – or Aztec marigolds – is there to welcome the souls of deceased loved ones. Delicate paper monarch butterflies are nestled in the altar to represent immigration travels to the United States

“That’s what we would like to do to share our traditions, our cultural customs, with the community that doesn’t know about Día de los Muertos,” she said. “Maybe [some people] I’ve seen Coco, but they don’t have anything real like the altar we’re making.

So far, the response at the altar has been positive, Seitz said Tuesday, noting community members’ curiosity about traditions they didn’t grow up with and his passion for teaching.

“Having [the altar] here is important to me and to the community in Mexico,” she said. “Because it’s keeping my culture, it’s keeping my traditions; it’s to keep fighting so as not to forget all that.

The public is invited to lay small ofrendas Tuesday and Wednesday at the altar outside Arte Rojo STL, 5208 Hampton Ave. The exhibition will continue until 3 p.m. on November 3.

Brian Munoz is a photojournalist and multimedia reporter at St. Louis Public Radio. You can reach him by email at bmunoz@stlpr.org and follow his work on Instagram and Twitter at @brianmmunoz.