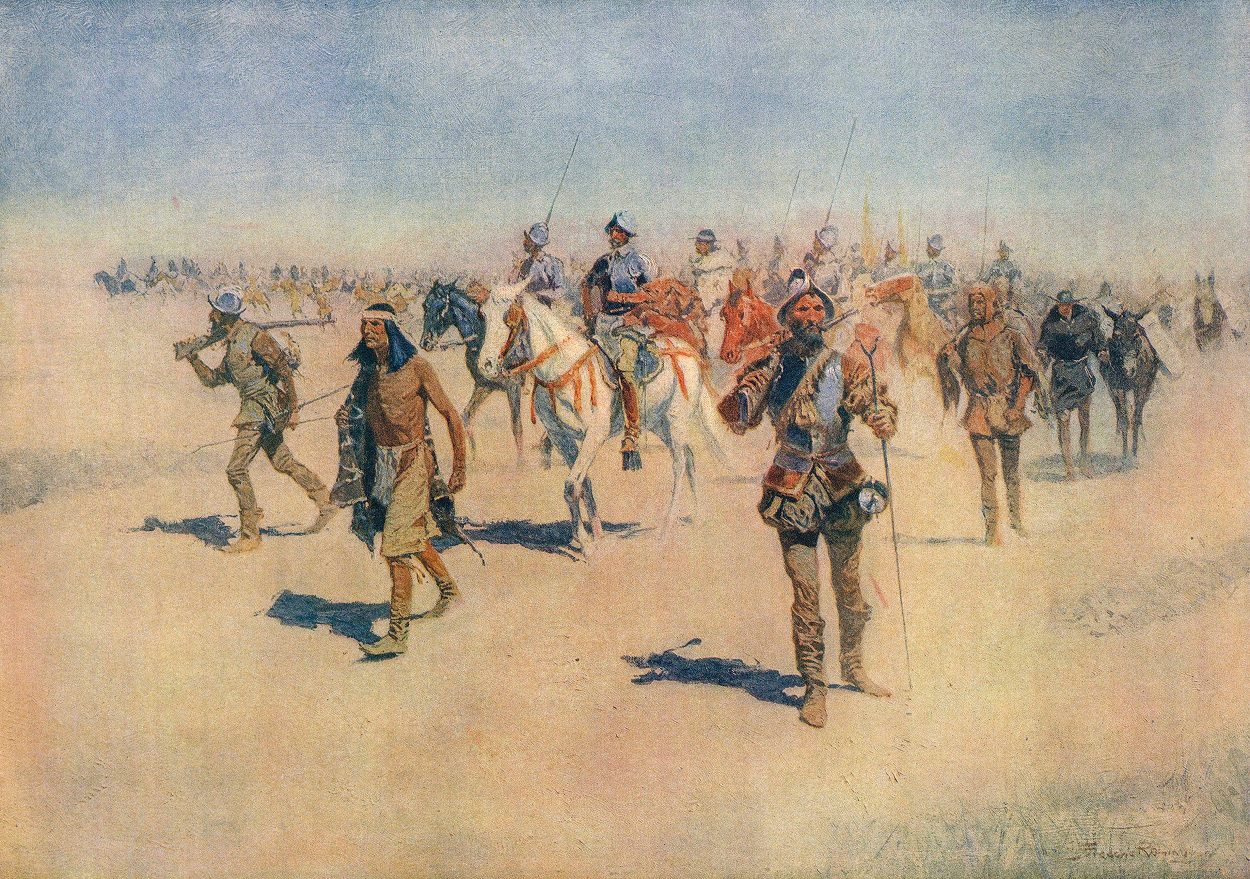 The legends may have their root in a Portuguese myth which stems from an ancient Iberian legend, about seven cities founded on a mythical rectangular island called Antillia in the Atlantic Ocean, as shown in the 1424 portula map of Zuane Pizzigano.

However, reports of Cibola come mostly from shipwrecked survivors of the Narváez Expedition, a failed colonial venture to establish colonies and garrisons in Florida in 1527.

Of the expedition’s 600 crew, only four survived the effort, with the others either lost at sea, killed in attacks by natives, or dying of disease and starvation.

The survivors, Álvar Núñez Cabeza de Vaca, Alonso del Castillo Maldonado, Andrés Dorantes de Carranza and Estéban (or Estevanico), were shipwrecked off Florida in 1528, spending many years wandering around present-day Texas and the north of Mexico, before being rescued by Spanish slavers in Sinaloa in 1536.

Upon his return to Spain, Álvar Núñez Cabeza de Vaca wrote about the expedition in his La relación (“The Story”), published in 1542 as the first written account of the indigenous peoples, fauna, flora and the wildlife of inland North America.

In La relación, Cabeza de Vaca mentions gold for the first time during an interaction with an indigenous group: “We also found pieces of linen and cloth and feather headdresses that seemed to come from New Spain . We also found gold samples. By signs we asked the Indians where they got these things. They told us that very far away was a province called Apalachee, in which there was a lot of gold, and they pointed out to us that it had a large quantity of everything that we valued. They said there were a lot of them in Apalachee.

A direct parallel can be drawn with the Apalachee people, a culture centered on the settlement of Anhaica in present-day Tallahassee. The Apalachee descended from the Fort Walton culture, one of the major Mississippian cultures that built giant mounds in the shape of a truncated pyramid and established an extensive trading network.

Archaeological studies of the culture rarely find evidence of gold working, but the Apalachee acquired copper artifacts, sheets of mica, greenstone, and galena from distant locations through this trade.

Cabeza de Vaca notes that the expedition came into contact with the Apalachee in 1528, reaching an outlying settlement of the wider Apalachee territory. There they occupied the settlement and took the chief and several villagers hostage.

Finding only corn and straw huts, the Spaniards searched for evidence of gold or substantial dwellings, while being harassed by the Apalachee and local tribal groups who waged guerrilla warfare against the invaders.

The expedition set out for the coast the same year, building five ships to sail along the gulf. Of the 600 members of the expedition, only 242 men had survived so far. Frequent storms, thirst and starvation reduced the expedition to around 80 survivors, before a hurricane threw Cabeza de Vaca and his remaining men onto the western shore of a barrier island which they named “Island misfortune”.

In response to the accounts of Cabeza de Vaca, the viceroy of New Spain, Antonio de Mendoza, sent an expedition in 1539 under Fray Marcos de Niza and Estéban (a Moorish slave who had been shipwrecked with Cabeza de Vaca) to verify the reports from Cabeza de Vaca.

Fray Marcos de Niza describes in his own book, “la Relación”, many third-party accounts of “Cibola” by travelers he met with Estéban, even claiming to have seen the seven cities from afar in western New -Mexico. He declares: “I only saw, from the mouth of the pass, seven reasonable towns, quite far away, a very cool valley below and very good soil, from which a lot of smoke came out; I was right that there is a lot of gold in it and the natives process it into vases and jewelry.

After reporting his findings, another expedition under Francisco Vázquez de Coronado was sent to conquer the riches of Cibola. Coronado followed the path described by Fray Marcos de Niza, but upon arriving in 1540 in New Mexico, he discovered that the legendary cities of gold were small native settlements and adobe towns of the Pueblo people.

Describing one of the towns, the officer and chronicler of Coronado, Castaneda writes: “It is a crowded little village, as if it had been all crumpled up. There are haciendas in New Spain that do better by far. It is a village of about two hundred warriors, three and four stories high, with small houses and only a few rooms, and no court.

Vázquez de Coronado caused a great loss of life among the Puebloans, both from the battles he fought with them in the Tiguex War and from the demands for food and clothing he levied on their fragile economies.

Around the same time, an expedition led by Hernando de Soto landed on the west coast of the Florida peninsula with a large contingent in search of gold which he was informed could be found at “Apalachee”. When de Soto’s expedition entered Apalachee territory, the Spanish soldiers were described as “throwing any Indians they encountered on both sides of the road”.