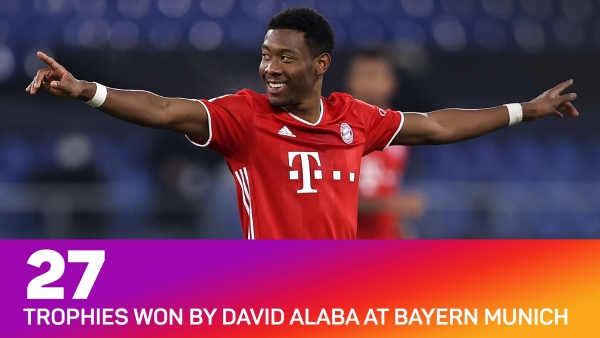 Everything at Real Madrid is bigger than Bayern Munich

David Alaba has said that “everything is a little bigger” at Real Madrid compared to former club Bayern Munich as he learns to cope with the heightened expectation of success.

Alaba’s 13-year association with Bundesliga champion Bayern came to an end in May after rejecting numerous contract offers at the Allianz Arena and joining the giants of La Liga Madrid.

The Austria international has started 13 of Madrid’s 14 appearances in all competitions this season – only Eder Militao and Thibaut Courtois have started more often – totaling 1,170 minutes on the pitch.

Alaba has held several positions and immediately established himself as the fan favorite with the opening goal in El Clasico’s 2-1 win over fierce Madrid rivals Barcelona on October 24.

This made Alaba the fifth Madrid player to score on his Clasico arc this century after Brazilian icon Ronaldo (2003), Ruud van Nistelrooy (2006), Raphael Varane and Jese Rodriguez (both in 2013).

With five clean sheets under his belt as well, it was a positive start to a new chapter for Alaba and one the versatile defender is taking in his stride.

â€œI felt that special aura and atmosphere from day one,â€ he told Kicker. “You can tell the story of this club as you walk through the training ground or through town.”

Asked about the comparison between Madrid and Bayern, Alaba added: “Both clubs represent absolute success. Bayern are one of the biggest clubs in the world, Madrid too.

“There is not much to separate them. But here in Madrid, without disrespecting Bayern, everything is even a little bigger.”

Alaba arrived in Madrid shortly before Sergio Ramos left for a free transfer to Paris Saint-Germain, with the longtime captain having made 671 appearances for the club.

Ramos won four Champions Leagues and five La Liga titles in his 16 years in the Spanish capital, but Alaba does not see himself as a direct replacement in defense.

â€œI came here to write my own story and play my game,â€ he said. â€œI get the comparisons every now and then, but I don’t really care.

“People accept that I am here now and play my football. We are also different types of players who can hardly be compared to each other.”

Alaba played a full role in Saturday’s 2-1 win over Elche, which puts Madrid in a tie with Sevilla and one point behind surprise leaders Real Sociedad, which they are one game short of.

It was Alaba’s 10th appearance in the Spanish top flight and he has already noticed a difference in style compared to the Bundesliga.

“Playing wisely La Liga is a bit different,” he said. â€œEven teams like Levante and Alaves are trying to play football from behind.

â€œAs a central defender, I have fewer aerial duels after penalties than in the Bundesliga. There, it is played forward more directly.

“In Spain, on the other hand, a lot of importance is attached to possession of the ball, even by teams quite far from the standings.

“It’s hard to say which one is more difficult, but they are definitely different.”

Fireworks exploded in Vancouver over Halloween weekend despite ban

An Asheville butcher, a bakery and much more