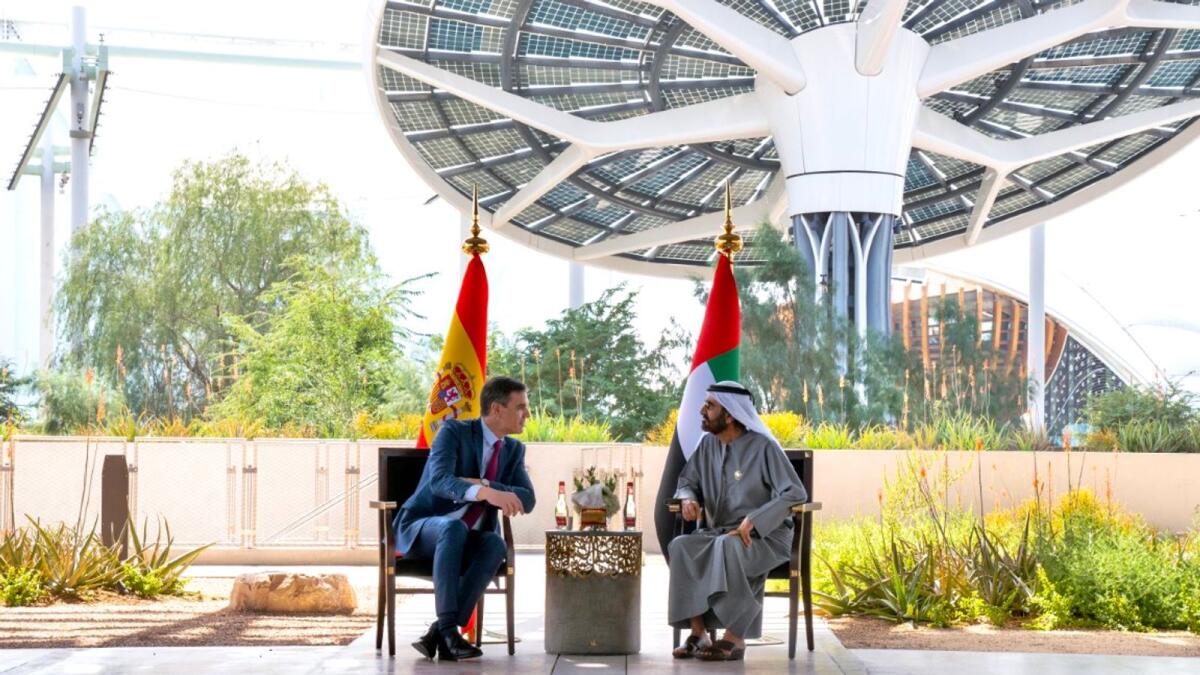 A number of memorandums of understanding have been signed to enhance cooperation in various fields.

The meeting discussed bilateral relations between the UAE and Spain and prospects for further cooperation in various fields, especially business and investment.

The meeting also explored new ways to share expertise in various sectors for the benefit of the peoples of both nations.

The two leaders also discussed a number of regional and global topics of mutual interest, and global efforts to accelerate economic recovery.

During the meeting, Sheikh Mohammed hailed the deep historical ties between the UAE and Spain, and the country’s keenness to further strengthen bilateral relations. He noted that the two countries have a common desire to expand cooperation and benefit from each other’s expertise and knowledge in various fields, especially industries of the future.

The ruler of Dubai said that Spain’s participation in Expo 2020 Dubai provides an opportunity to explore prospects for expanding collaboration, mainly in economic and technological fields, as well as strengthening exchanges culture and knowledge. He also underscored the UAE’s keenness to provide an investment-friendly environment.

Prime Minister Pedro Sanchez expressed Spain’s desire to further strengthen bilateral relations in the years to come. He also highlighted the positive and influential role played by the UAE both regionally and globally and hailed its unique development model.

Sheikh Mohammed and the Prime Minister of Spain also witnessed the signing of several agreements and memorandums of understanding aimed at enhancing cooperation in various fields, including industry, technology, climate change, education, health and information security.

The agreements included a memorandum of understanding to promote collaboration, which was signed by Ohood bint Khalfan Al Roumi, Minister of State for Government Development and the Future, and José Manuel Albares Bueno, Spanish Minister for Foreign Affairs , the European Union and Cooperation.

Sarah bint Yousif Al Amiri, Minister of State for Advanced Technologies, and Maria Reyes Maroto Illera, Spain’s Minister of Industry, Trade and Tourism, also signed a memorandum of understanding on cooperation in the field of industry and advanced technologies.

Another memorandum of understanding on climate action was signed by Mariam bint Mohammed Almheiri, Minister of Climate Change and Environment, and José Manuel Albares Bueno.

There are over 200 Spanish companies operating in various sectors in the UAE. The volume of trade between the two countries exceeded more than 7.7 billion dirhams.

Why 1922 was the greatest year in literature