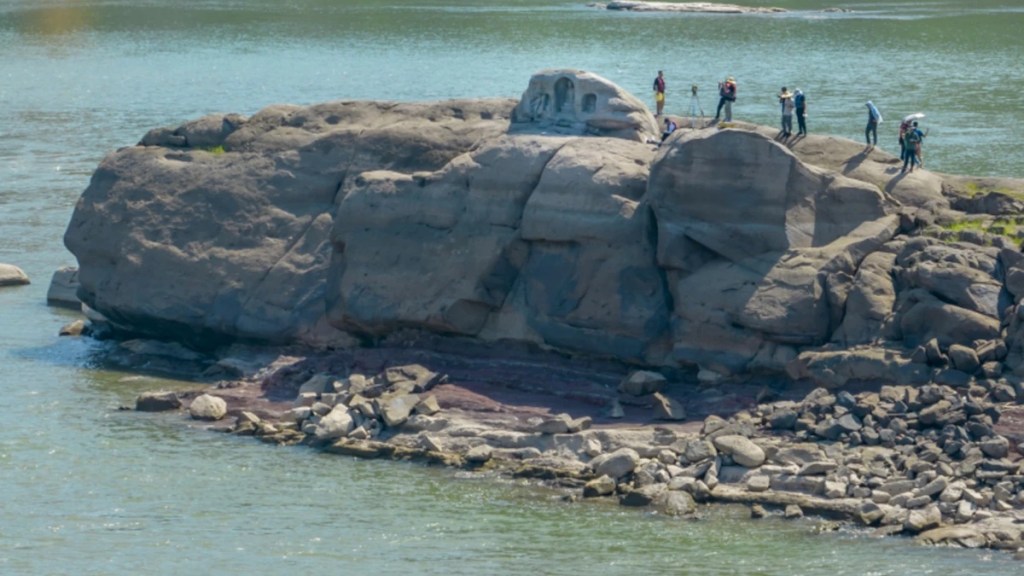 Water levels in the Yangtze River have plunged amid a severe drought in China, revealing a trio of Buddhist statues believed to be 600 years old. They were sitting on a submerged island off the southwest Chinese city of Chongqing, China’s official Xinhua news agency reported.

The three statues were found on the highest part of the island’s reef, called Foyeliang, and date from the Ming and Qing dynasties. One of the statues depicts a monk perched on a lotus pedestal.

The Yangtze, the world’s third-longest river, is one of many bodies of water in China drying up during the extreme heat wave caused by climate change, with temperatures in some cities exceeding 104 degrees Fahrenheit. Rainfall in the Yangtze basin has been about 45 percent below normal since July, and the sweltering heat is expected to last through September, forecasters said. On Sunday, the provincial government said in a statement that the region was facing a “serious situation”.

“There are severe power shortages due to the extreme high temperature disaster and drought,” the statement continued. The Yangtze River provides drinking water to over 400 million Chinese and is crucial to global shipping routes.

The unprecedented drought in Europe has also revealed sunken treasures. The Danube, which flows from western Germany to the Black Sea, is at one of its lowest water levels in nearly a century. The hulls of dozens of German warships sunk during World War II have been exposed in the Danube near Prahovo in eastern Serbia; many still contain live ammunition and explosives.

In Spain, the drying up of a dam led to the discovery of a prehistoric stone circle dubbed the “Spanish Stonehenge”. The ring of megalithic stones is officially known as the Dolmen de Guadalperal and probably dates back to 5000 BCE. The stones rest on an exposed corner of the Valdecanas reservoir, in the province of Caceres.

The stone circle was discovered in 1926 by German archaeologist Hugo Obermaier, but the area was flooded in 1963 as part of a rural development program under the regime of Francisco Franco. It has only been accessible to archaeologists four times since then due to fluctuating water levels in the dam.