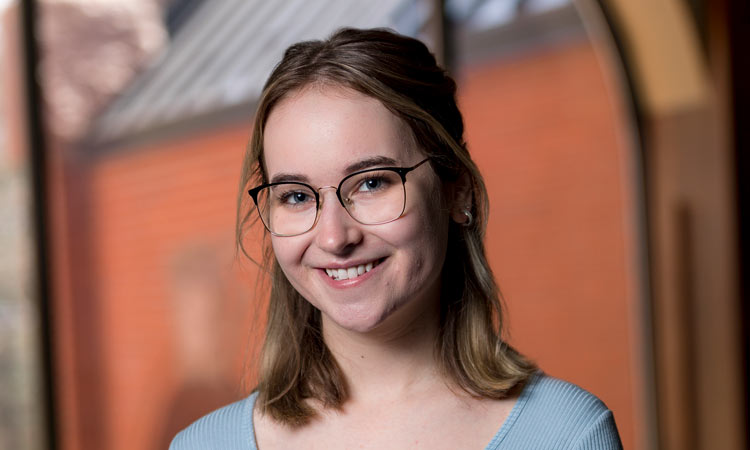 Editor’s note: This feature on Kate Schiltz ’22 is the third of six to appear this summer on College of Saint Benedict and Saint John’s University graduates who have received Fulbright US Student Program awards.

Kate Schiltz ’22 really had no choice but to excel.

So, perhaps we shouldn’t be surprised that Kate double majored in English and Hispanic Studies, never fell below an A in any of her courses at the College of Saint Benedict and Saint John’s University, and was l one of six CSB and SJU graduates who won Fulbright scholarships for students for the 2022-23 academic year.

Starting this fall, she will be living in Madrid, Spain, and working as an English teaching assistant at IE Universitya private school that welcomes students from more than 130 countries and is ranked by many indicators as one of the best universities in Europe.

Of course, being a Fulbrighter isn’t even unique in one’s own house. Joe earned this honor several years ago and studied in Berlin.

“I had some really good role models,” Kate said. “I saw them succeed and I was like ‘I have to do this too’.”

Still, with all that intellectual firepower in her family tree, Kate derives perhaps the greatest motivation from her brother, Peter, who is five years older and was born with Down syndrome, autism and speech apraxia.

“We are very close,” Kate said. “He’s just the best human I’ve ever interacted with. He taught me a lot about what it means to be authentic, because he doesn’t really care what other people think. He doesn’t really have that ability. He is often happy and he knows exactly when I am sad and how to cheer me up. As he is my older brother, I never grew up learning that he had a disability. He was never than my brother. As I got older, I could tell that people would start to act differently towards him and I would understand that. But it was a really unique experience. As much as I can help take care of him physically, he definitely takes care of me. emotionally.

This is one of the reasons she wants to pursue a career in helping people with disabilities. And, since her sister married a man from Bolivia – and they recently had a baby, Kate is also interested in immigration due to her brother-in-law’s background.

“I see how he’s been treated and all the legal hurdles he has to go through as a non-citizen of the United States, and it made me think maybe I want to do something with the Spanish-speaking population.” , said Kate. “Especially if they have a disability, because I know the obstacles they face. And if they speak Spanish, there are even more obstacles they are likely to face.

Unsurprisingly, Kate plans to go to law school once she completes her Fulbright studies.

“I tried to run away as long as possible and not look like my parents, but it’s inevitable,” she said. “I realized that I really like the law. I like the way it works.

Witnessing Chauvin’s conviction affirms the future of the law

Given the influence of her mother and father, Kate was energized by a summer 2021 internship with a state court judge Judge Edward Wahl, and she also spent time observing Judge Peter Cahill. Both serve the Fourth Judicial District from the Hennepin County Courthouse. Kate was privileged to attend a variety of their meetings and hearings, including being one of the few people allowed to watch the Sentencing of Derek Chauvin live in the courtroom. As well as watching Judge Cahill, Kate got to meet both legal teams in one of the most high-profile cases in recent US history.

“This internship really cemented my interest in the field of law, and I learned a lot from some really amazing professionals,” Kate said.

She is on her way to join them. After graduating from Minnetonka High School, she served four years as a writing center tutor at CSB and SJU. This was in addition to achieving Phi Beta Kappa status as a senior, joining Delta Epsilon Sigma – an elite national Catholic honor society, and being president of Students for Life and Vice. -President of the AKS Service Sorority.

“What drew me to Saint Ben’s — and it’s cliché because everyone says it — was the community,” Schiltz said. “Immediately as I walked around campus, I felt at home and like everyone really cared about everyone. The teachers, monks and nuns cared about us. I think because my family is so close, I wanted that feeling in college too. Leaving now as an alum I found some amazing people who made me feel like I had a new family who helped me through some tough times and were also there for some really good times .

Kate visited Spain for two weeks in high school and lived in Italy for two months when her mother was teaching in Rome.

“I traveled with my parents, but I’m excited for this time to come and to be able to travel on my own,” Kate said. “When I was little we had a lot of au pairs, some of them from Germany and Poland. I think it would be really cool to visit them. And I would love to go back and walk around where I used to live in Rome.

Kate leaves in September for her Fulbright duties, but will first work this summer as a barista and will also be her brother’s babysitter.

“Leaving him is going to be the hardest part of leaving,” she said.

CSB and SJU students interested in applying for a Fulbright Award for the 2023-24 academic year should contact Phil Kronebuschprofessor of political science and coordinator of competitive scholarships at CSB and SJU, or Lindsey Gunnerson GutschDirector of the Office of Undergraduate Research at CSB and SJU.

How to get the best deal on a home improvement loan