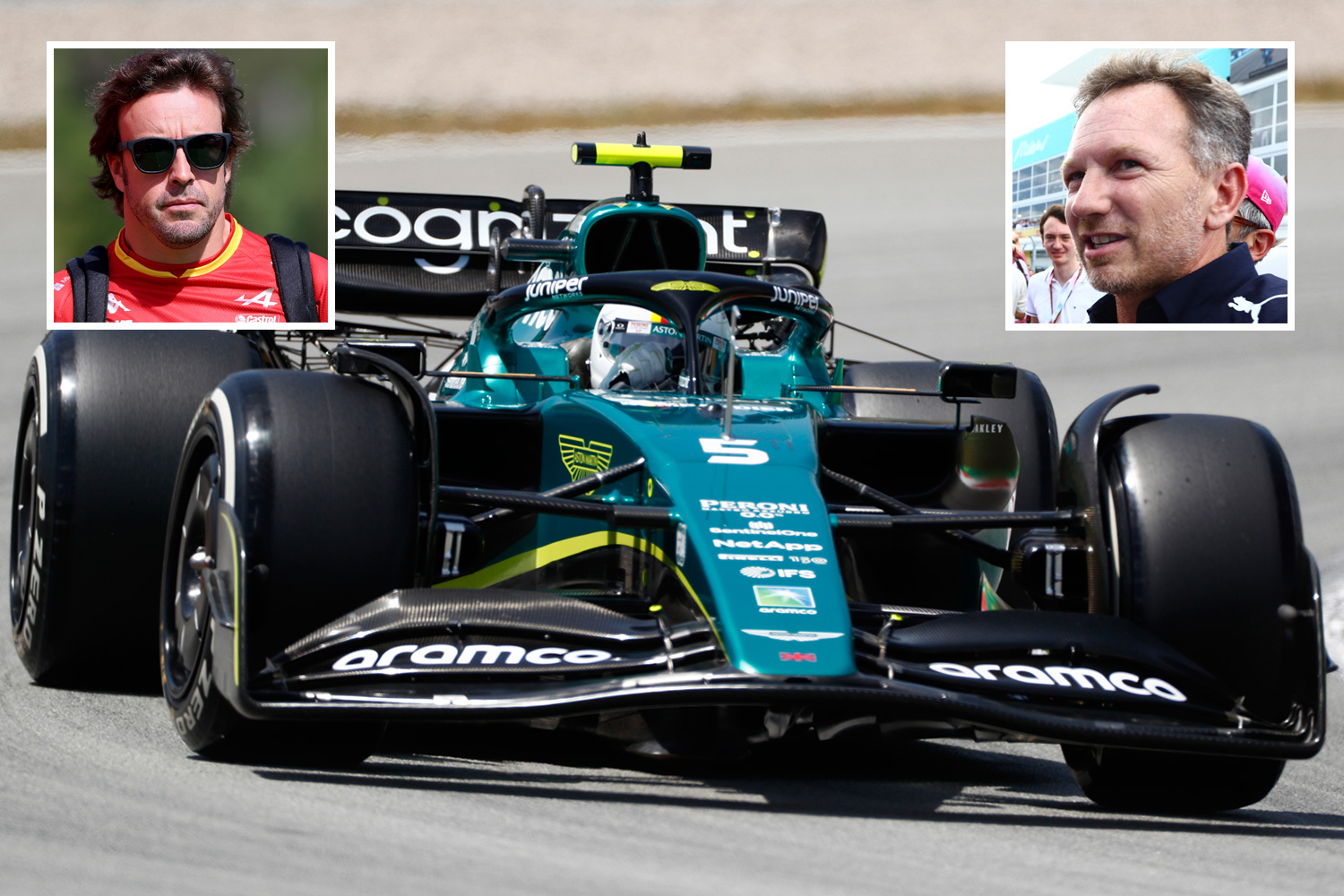 FORMULA 1 tangled in TWO rows at the Spanish Grand Prix.

Red Bull is at odds with Aston Martin over claims the latter copied the design of its car.

And Fernando Alonso launched a scathing attack on the FIA ​​race marshals, accusing them of being incompetent and “not very professional”.

The two hot spots ignited this sold-out race in Barcelona where local hero Alonso now faces a grilling from the FIA ​​after his outbursts.

Meanwhile, Red Bull has also taken aim at the FIA ​​after the governing body said it was convinced Aston Martin had NOT stolen their design.

Eyebrows were raised when Aston Martin unveiled a host of new updates for their car here in Spain – with the sidepods and floor design resembling those of Red Bull – prompting them to seek clarification from the FIA.

But after the FIA ​​issued its statement clearing Aston of any wrongdoing, Red Bull issued its own statement.

The Milton Keynes-based team are unhappy as Aston have recruited a number of their staff over the past 12 months.

Their statement read: “Red Bull Racing has noted the FIA’s statement with interest. While imitation is the greatest form of flattery, any design replication would obviously have to comply with FIA rules regarding ‘Reverse Engineering’. .

“However, if a transfer of intellectual property had taken place, this would clearly constitute a breach of regulations and would be of serious concern.”

It’s not the first time the team has been accused of copying. In 2020, under their former name, Racing Point, they produced a “pink Mercedes” – a design that looked like a carbon copy of Lewis Hamilton’s title-winning car from the previous season.

And in another dig, Red Bull appeared to poke fun at what has become known in the paddock as ‘green Red Bull’ by swapping their usual pit wall drinks for a different variety in a green can, apparently a reference to Aston’s green car.

REd Bull boss Christian Horner said: “It is no coincidence that a few people transferred from Red Bull to Aston Martin over the winter and at the start of the season.

“It was brought to our attention by the FIA ​​earlier this week who said: ‘There is a car that looks remarkably like your car, can we have a list of your levers?’

“Of course, that immediately sounds the alarm. What is allowed, we see from top to bottom in the paddock, where individuals move from one team to another after a period of garden leave, which they get it in their head, it’s fair game.

“It is their knowledge. What is not fair and what is totally unacceptable is if there has been a transfer of intellectual property.

“I’m not going to divulge exactly where we are with certain people. It would be a criminal offense because intellectual property is the lifeblood of a team, it’s what we invest millions of pounds in.

“You wouldn’t want to see that happen in a rival’s organization. Otherwise, we might as well franchise it and be able to sell aero.

“We will conduct an internal investigation. We have our own software protection, we know exactly what software is locked down and where it is controlled.

“But that’s the job of the regulator, the FIA, because they have the access, and we rely heavily on them to make sure there’s been no transfer of intellectual property or abuse of that. So that’s really their job as the police.”

Meanwhile, Alonso will have to explain his comments to the FIA ​​after his spectacular outburst.

Alonso, 40, was demoted from points at the Miami GP after receiving a post-race time penalty for running off the track and gaining an advantage.

And while he says the decision was bad, he also says F1 shouldn’t tolerate such poor quality refereeing.

He said: “It was very unfair and it was just incompetence from the stewards.

“They weren’t very professional in Miami. I missed a turn and they made the decision without asking for any evidence.

“We arrived after the race with all the evidence that I had returned the time and they were just packing up. They weren’t even in the hall.

“So it was very bad. It’s something that shouldn’t happen in Formula 1, with the professionalism and standards of Formula 1 at the moment.”

Alonso’s rant comes just five months after the FIA ​​was forced to drop former race director Michael Masi after he failed to adhere to safety car rules during the title decision at Abu Dhabi.

But Alonso is unhappy with Masi’s replacement Niels Wittich and says he lacks experience.

He added: “We have already seen a few things that prove that we still have a lot to improve on.

“You have to have racing knowledge before you’re a race director or trying to oversee a race. And I don’t think that knowledge is in place at the moment.

“When you don’t have that racing knowledge, it’s hard to talk.”