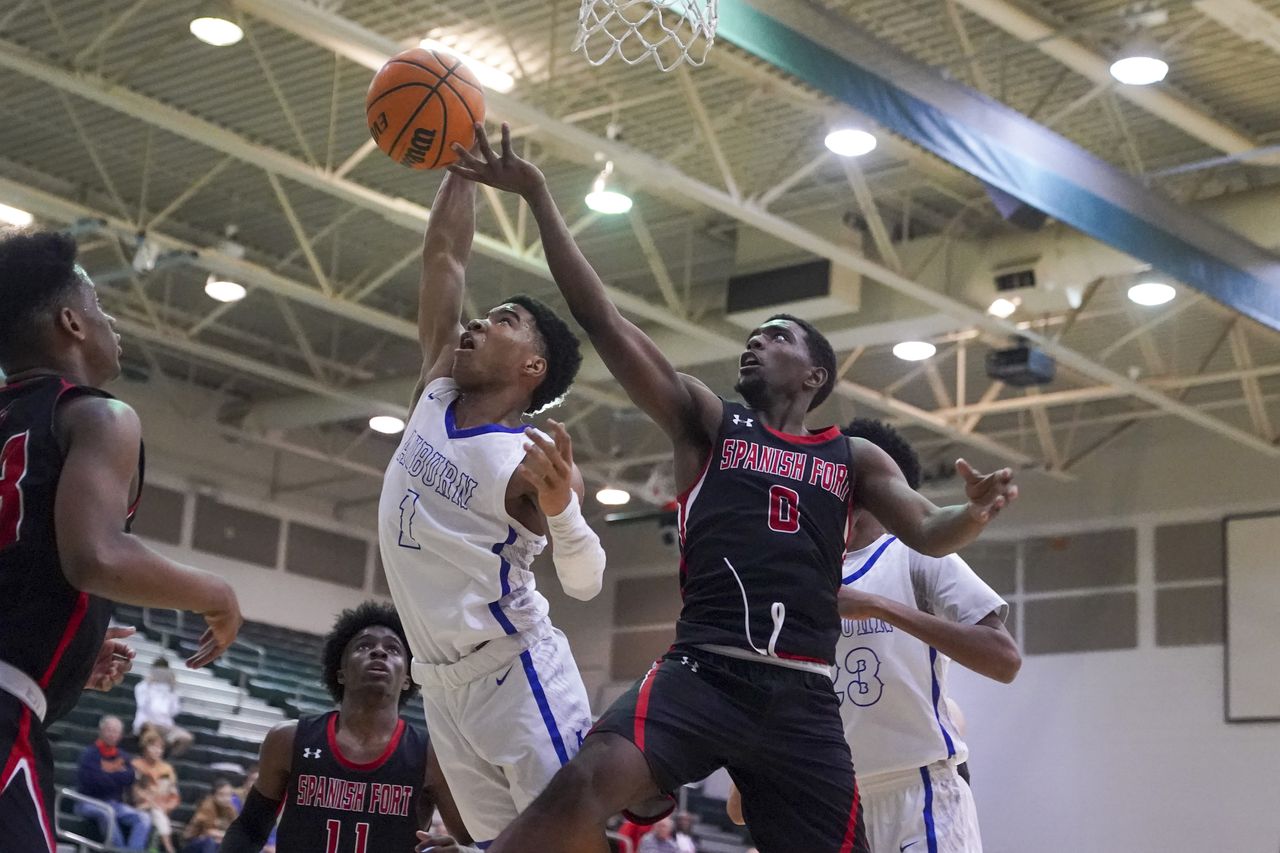 Mountain Brook won three games this week in their Spartan Turkey Jam to win the tournament championship, beating Eufaula 80-65 on Wednesday, Charles Henderson 62-59 on Tuesday and Tuscaloosa County 55-37 on Monday.

In the win over Charles Henderson, the defending Class 7A champions got 18 points and seven rebounds from Rowe and 11 points from Layton. Davis scored 9, had five rebounds, five assists and three steals. McKimmon took eight rebounds. Akeives Shorts led the Trojans with 19 points and Jayden Spearman had 13 with eight rebounds.

In other matches from a busy holiday week on the hard court:

Spain Park qualified for the championship game with a 78-69 victory over reigning Class 4A state champion Anniston. Turner led the winners with a career-high 30 points. Gray had 14 with three 3 points. Chase James and Josh Harrington scored 10 points each.

On day one of the Jag Classic, Spain Park broke away in the third quarter to beat Chelsea 65-47. The Jaguars trailed 18-17 after one and led 32-27 at halftime before beating Chelsea 20-10 in the third period. Turner and Harrington led the winners with 24 and 19 points, respectively. Harrington had five 3-pointers.

In the 58-52 semifinal win over Cottonwood, Jacob Lowery scored 18, Feagin scored 11 and Cheatham scored 10. Georgiana opened her season with a victory at the Dothan Turkey Classic at the Dothan Civic Center. . Amari Feagin had 18 points, 11 rebounds and four blocks in the win. Josh Sims scored 14 points and Tremari Longmire had 13 points and eight assists.

Baker 69, Cottage Hill 65: Labaron Philon scored 22 points on his birthday as Baker beat Cottage Hill on Wednesday to win the Robertsdale Pre-Thanksgiving Shootout. It was the Warriors’ first loss of the season. Baker improved to 7-1. Josh Flowers followed with 16 and Jayven Williams added 14. The Hornets scored 11 3 points in the game (five from Philo and four from Flowers).

Cottage Hill was run by Trent Thomas with 25, Josh Bell with 17 and Tyler Thomas with 13.

In the semi-finals of the tournament, Cottage Hill Christian Academy handed the Bucs their first loss, 58-51. Grady had 12 points and eight rebounds for Hoover. Josh Bell had 25 points and five rebounds for the Warriors. He was 11 of 12 from the foul line. Trent Thomas had 16 points, four blocks, two assists and one steal.

Hoover 71, Daphne 48: The Bucs passed Daphne in the Robertsdale pre-Thanksgiving shootout. Hoover’s 12 players signed up for the scoreboard, led by Dewayne Brown with 12 points, six rebounds and four blocks. Salim London scored 11, Brodin Grady had 9 with seven rebounds. The Bucs improved to 5-1 with a 59-37 victory over St. Paul’s to close the tournament.

Hoover was led by London’s 13 points, four rebounds and three assists. TQ Richardson and Dewayne Brown had 11 each. Brown also had six rebounds.

In the Robertsdale tournament matches earlier in the week:

Baker 60, St. Paul’s 37: Labaron Philon led the Hornets with 14. Charles Taylor followed with 12 and McWell Hogue had 10. Baker also beat Jackson 68-32 on Day 1 of the tournament. Philon finished with 20 points and Jayven Williams had 15.

UMS-Wright 68, Robertsdale 47: Bridges Simmons had 22 points and 8 rebounds for the Bulldogs in the consolation championship of the Robertsdale tournament. Sims Druhan finished with 16 points and 12 rebounds and Ben Cameron had 13 points. Jalen White led Robertsdale with 16. Tony Carmichael had 13. Earlier in the tournament, UMS beat Daphne 58-54. Simmons had 24 points.

Sparkman 65, Mae Jemison 56 (OT): The Senators crushed Mae Jemison in overtime to send the Jaguars into the Thanksgiving break at 5-3 that year, with all of their losses to Class 7A opponents. Class 5A Mae Jemison had 15 points and five assists from Fredrick Derrick. Isaiah Curry scored 14 with four rebounds and four assists. Tai Hayes scored 13 with seven rebounds. Kennedy Turner scored 8 with six rebounds, two assists and two steals. Earlier in the week, the Jaguars beat Columbia 72-53, led by Turner’s 15 points and 12 rebounds. Curry had 14 points and seven rebounds, Derrick had 11 and Denzel Washington threw 10.

Earlier, the PCA had beaten Southside-Gadsden 51-40 as Roberson scored 14 and Hunter 16 rebounds and 10 points in the victory. Segars had 9 points and four assists and Brady Hughes had seven assists for Prattville Christian.

Grissom 76, Columbia (Ga.) 69: In the HoopsGiving tournament hosted by Plainview at DeKalb County Colisum, Grissom’s Efram Johnson led the Tigers with 35 points. RJ Johnson scored 15 and Izzy Miles scored 10 as Grissom moved up to 6-0 and will face Madison Prep of Baton Rouge, Louisiana on Friday in Corinth, Mississippi. Earlier in the week, Grissom beat Gadsden City 75-57. Johnson scored 22 points for the Tigers, while Miles and Johnson had 13.

McGill-Toolen 52, Spain Parc 40: Junior Anna Reed McNeece scored a career-high 25 points to lead McGill-Toolen, making 11 of 16 shots from the field. The Yellow Jackets shot 59% from the field, including 5 of 10 3-pointers in the win. Alex Baskin and Camille Chase led Spain Park with 12 and 11 points respectively.

Davidson 45, Fairhope 39: Fairhope took out the Pirates on Monday. Fairhope got 9 points from Lexie Grace Hunt, 8 from Reagan White and 7 points with eight rebounds from Elyse Hughes.

Fairhope (5-1) rebounded with a 70-52 victory over Faith Academy. White and Hunt collected 17 points each in the victory. Hughes had 8 points and eight rebounds. Yasmin Harmon had 10 rebounds and 6 points.

Priceville 52, Arabic 38: The Bulldogs got 16 points and six rebounds from Lauren Hames in the win. Olivia Gann scored 13 goals and also took six rebounds. Leslie Hames scored 11. Earlier, Hartselle clinched a 57-42 victory over Priceville with a final quarter of 14-4. Mayson Marchabanks scored 32 points to lead the Tigers. Priceville got 14 points from Leslie Hames. Zoey Benson led the Bulldogs with seven rebounds while Natalie Cartee had six.

Prattville Christian 61, Gadsden City 41: Ella Jane Connell led Class 3A Prattville Christian with 21 points, five assists and four rebounds in the victory over 7A Gadsden City at the Supreme Court Thanksgiving Tournament in Guntersville. Hannah Jones had 18 points and eight rebounds while CoCo Thomas had 11 and 11 rebounds. The Panthers have improved to 9-0 this season.

Earlier in the tournament, Sand Rock beat Asbury 68-32, led by St. Clair’s with 21 points. Garrett had 19 points with five assists while Lisenbee had 8 points, five steals and four assists.

Sand Rock also beat Boaz 65-48 earlier in the tournament. Lanie Henderson had 25 points and St. Clair had 14 and Garrett had 8 points, three steals and three assists.

Brewbaker Tech 45, Montgomery Academy 39: Montgomery Academy lost in the semifinals of the Larry Chapman tournament. Virginia Meachum led the Eagles with 19 points, Hayes Jenkins had 11 and Pierson Hartley had 10 rebounds in the loss.

Overview of the Global Military Training Aircraft Market to 2030 – With Diamond Aircraft Industries, Embraer and BAE Systems, among others