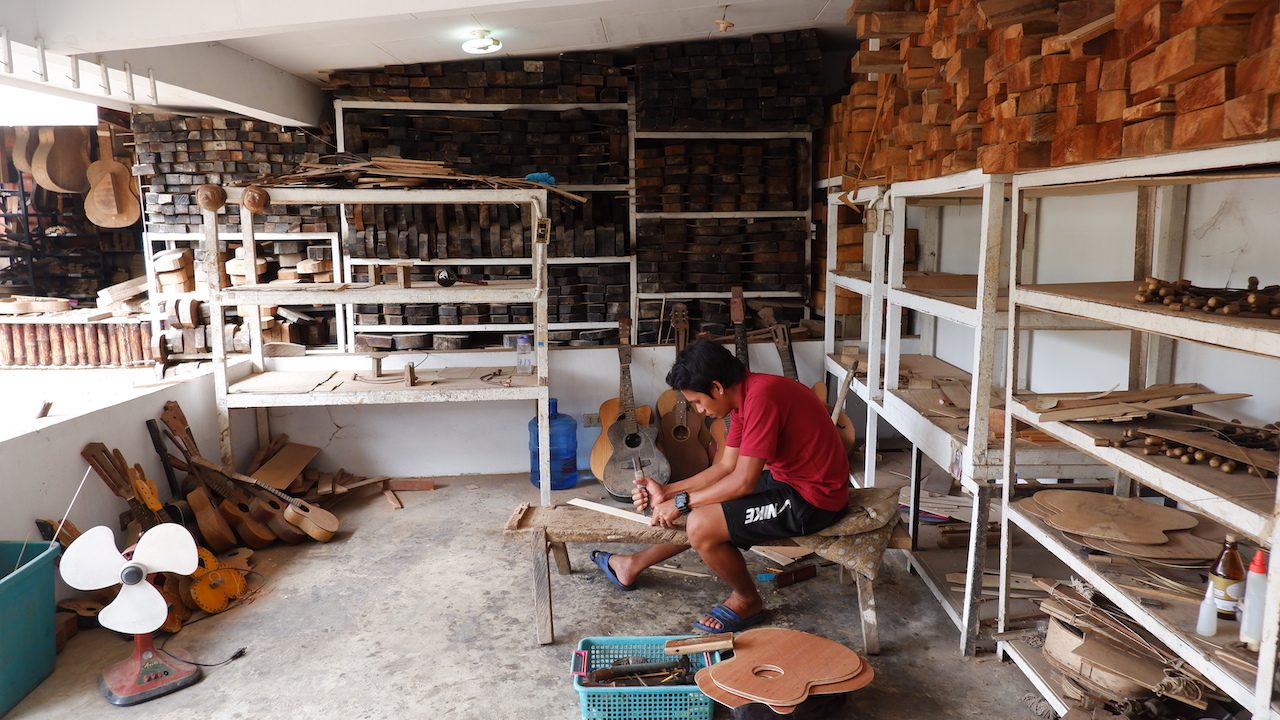 How to buy a guitar? You have to feel it in person, says this luthier from Cebu

MANILA, Philippines — Upon entering Alegre Guitar Factory in Lapu-Lapu City, Cebu, visitors are greeted by the smell of wood and the clear, silver sound of acoustic guitar.

A wall near the entrance displays different soundboard patterns and a selection of materials — all kinds of wood, including mango, acacia, cedar, German spruce, and rosewood.

On one particular afternoon, owner and luthier Fernando Alegre regaled visitors with music – pop classics like “Fly Me to the Moon” and “In My Life” brought to life by his deft fingers and the clarity of his instrument.

He then became a luthier – a person who builds and designs stringed instruments – at the age of 18. Later he moved to Cebu and established his own guitar factory. Now 72, Fernando has been running Alegre Guitars for 30 years.

The History of Guitar Making in Cebu

Cebu has a long history of guitar making. As the first place in the Philippines to be Christianized, the province was introduced to guitars by Spanish brothers who used them for church. At the time, while waiting for guitars to arrive from Mexico, the brothers taught locals how to repair their existing guitars and make new ones.

Hundreds of years later, Cebu guitars have become famous throughout the country – with Alegre among the oldest and most popular of Cebuano guitar makers.

In its heyday, Alegre was an essential stop on Cebu City tours and a go-to for musicians around the world. On a wall inside the shop you can see their celebrity clientele including Steven Bauer, Apl of Ap and members of English boy band A1.

But when the pandemic put an end to tourism, the factory lost all its customers.

(The tourists disappeared, so what happened to us? All dead. The workers, we paid them even if we had no income and there were no sales. For two years, there was no there were no tourists.)

As the pandemic raged, Alegre’s workforce of 30 was reduced to seven. Desperate to pay his workers, Fernando was forced to do something against his will: sell his guitars online.

Selling online has become a lifeline for all kinds of businesses during the pandemic. Over the past few years, everything from appliances and furniture to clothes and food has been easily bought and sold with the click of a button. But it’s not quite the same for guitars.

Buying a guitar from Alegre is not just that. There is a certain reverence that comes with the experience – of walking into their workshop, holding the weight of a guitar and feeling the strings, and then hearing it play.

“Ako mismo, as a guitarist, dinidiscourage ko yung online. Napilitan lang kami dahil kailangan“, explained Fernando. “Kasi ang guitar is a product you must touch, you must listen to.”

(As a guitarist, I do not recommend online sales. I was only forced to do so because it was necessary. The guitar is a product that must be touched, that must be heard.)

Now that tourism is picking up, Alegre Guitars could see sales increase, putting their lovingly crafted guitars back in the spotlight.

For Fernando, a good guitar is only as good as two things: the wood used to make it and the luthier who made it.

(Your wood should be of good quality. Second, it depends on your luthier’s experience and knowledge of sound production.)

With Fernando’s 54 years as a luthier and a wide selection of woods aged for years, it’s no wonder many consider Alegre guitars to be world class. But don’t take anyone’s word for it. As Fernando said, it’s better to go there and feel it for yourself. – Rappler.com

Local moose give a lot of money