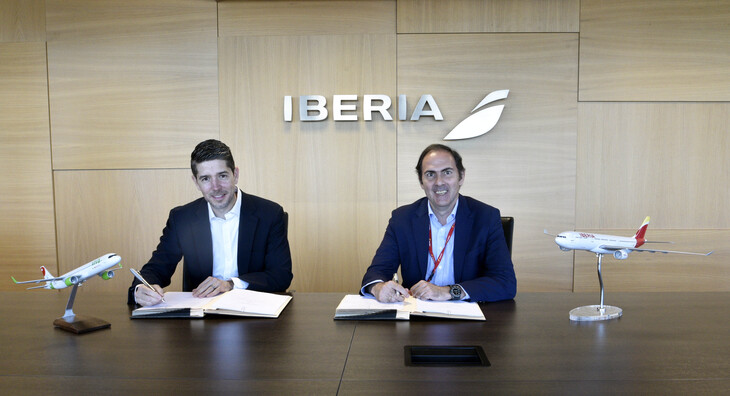 Iberia and Viva Aerobus signed a codeshare agreement to offer passengers greater travel options between Mexico and Spain by combining the routes operated by the two airlines.

Users of the Spanish airline operating flights on the Madrid (MAD) – Mexico City (MEX) route will be able to take advantage of connecting flights from the Viva Aerobus domestic destination network offered by the AICM.

On the other hand, customers in Mexico who want to travel from the Spanish capital via Iberia, will be able to connect on the MEX – MAD route by making the first trip with the Mexican carrier on a connecting flight from one of the destinations offered by company at Benito Juarez International Airport (MEX).

Mexico City (MEX) is the second busiest transatlantic route from Adolfo Suarez International Airport: data obtained by Aviacionline via Aena Statistics indicates that in the period January to June this year, 397,925 passengers and 13,905 tonnes of cargo were mobilized in 1,552 air operations.

The signing of the codeshare agreement will allow Iberia customers to purchase their travel itineraries in a single reservation, subject to the same baggage policy and uniform fare conditions. Tickets are now available for sale on both airlines’ websites for flights beginning August 30.

All Iberia flights between Madrid (MAD) and Mexico City (MEX) are operated on Airbus A350-900 with a capacity of 348 seats in three classes (31 Business Class/24 Premium Economy/293 Economy Class) and the airline offers 11,932 seats per week in 38 flight operations.

Viva Aerobus operates the most modern fleet in Mexico and the third youngest in North America, with an average age of 5 years, and is made up of Airbus aircraft: 40 A320s and 22 A321s.

Spain is Mexico’s main transatlantic market; according to data obtained by Aviacionline through the Federal Civil Aviation Agency (AFAC), in the first half of the year 624,447 passengers were transported between the two countries with an occupancy factor of 80.1% in 2,511 air operations. Iberia is the largest airline operator in this market with a 37.2% share.

“At Iberia we have always been committed to considering Mexico as one of our strategic markets, both from the point of view of tourism and business traffic. As demand has intensified, we have accompanied this reactivation with an increase in capacity very close to the pre-pandemic supply. With 19 flights per week, Mexico City is the metropolis with the highest number of frequencies in the Americas,” said María Jesús López Solás, Commercial Director, Network Development and Alliances at Iberia.

“From now on, thanks to the codeshare agreement with Viva Aerobus, we will be able to offer better service to our customers and greater capillarity with a wide range of destinations in the country,” added López Solás.

“At Viva, we are very proud to have signed this codeshare with Iberia. This alliance allows us to connect our domestic flight network from Mexico City with the route that offers the greatest number of passengers between Mexico and Europe,” said Javier Suárez, Alliance Director at Viva Aerobus.

Burnout among psychotherapists: a survey of intercultural value in 12 European countries during the coronavirus disease pandemic