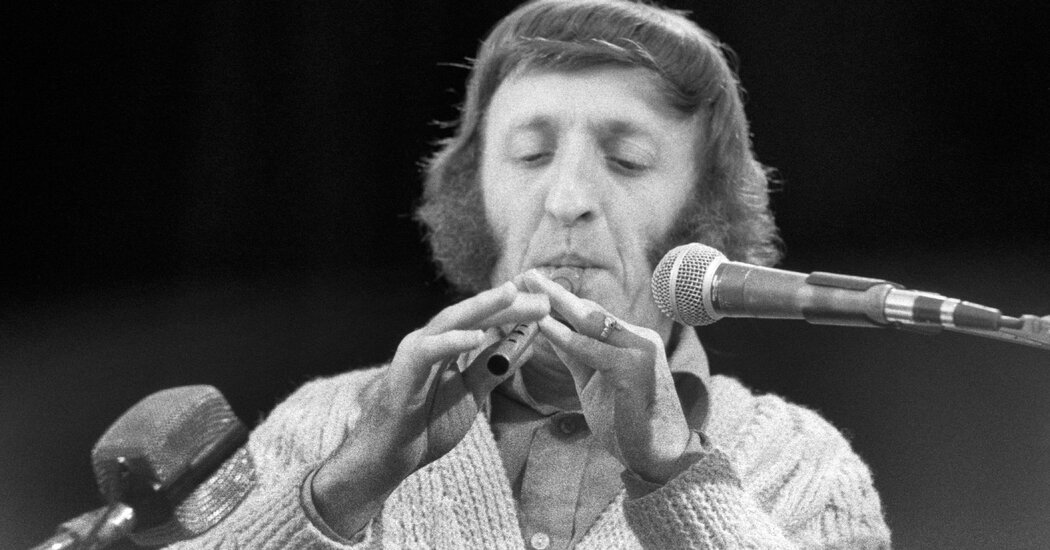 Irish piper who led the Chieftains, Paddy Moloney dies at 83

Paddy Moloney, the playful but disciplined singer and bagpiper of the Chieftains, a group that was at the forefront of the global revival of traditional Irish music performed with traditional instruments, died in Dublin on Monday. He was 83 years old.

His daughter Aedin Moloney confirmed the death, in a hospital, but did not specify the cause.

For nearly 60 years, the Chieftains have toured extensively, released over two dozen albums, and won six Grammy Awards. They were particularly known for their collaborations with artists like Van Morrison, Mick Jagger, Paul McCartney, Nanci Griffith and Luciano PavarottI.

“Over the Sea to Skye,” the Chieftains’ collaboration with flutist James Galway, peaked at No. 20 on the Billboard Classic Albums chart in 1996.

“Our music is centuries old, but it’s really a living thing,” Mr. Moloney told the Philadelphia Inquirer in 1989. “We don’t use flashing lights, smoke bombs, or acrobats falling from the scene.” He added: “We try to communicate a feeling of celebration, and it’s something that everyone understands.”

In 2012, while vice-president, President Biden told People magazine that his desire was to sing “Shenandoah” with the Chieftains “if I had musical talent.” He invited them to perform at his inauguration this year, but Covid restrictions have kept them from traveling.

Mr. Moloney was a master of many instruments: he played the uileann pipes (Ireland’s national bagpipes), tin whistle, bodhran (a type of drum) and button accordion. He was also the group’s main composer and arranger.

Asked in 2010 about the NPR quiz show “Wait, wait … Don’t tell me” what he thought was the sexiest instrument, he chose the pipes.

“I often call it the octopus,” he said, “and so, I mean, it’s something that moves every part of you.”

The Chieftains performed at the Great Wall of China, Nashville and Berlin to celebrate the fall of the Berlin Wall in 1990, joining Pink Floyd’s Roger Waters to play “The Wall”.

Their other Grammys included one for Best Pop Collaboration with vocals for “Have I Told You Lately That I Love You?” “, A collaboration with Mr. Morrison on their album” The Long Black Veil “, released in 1995, and one for the best world album, for” Santiago “(1996), composed of Spanish and Latin American music.

Mr. Moloney had an affinity for country music.

“I always thought of Nashville as another part of Ireland, to the south or something like that,” he said. said on the Tennessee Performing Arts Center website in 2020. “When I came there and played with music geniuses like Sam Bush or Jerry Douglas or Earl Scruggs, they got it all so easily. You don’t have to bend down and rush.

The last track on “Another Country” – “Final: Did You Ever Go A-Courtin ‘, Uncle Joe / Will the Circle Be Unbroken ”- with Ms. Harris, Ricky Skaggs and the Nitty Gritty Dirt Band. Rambles, a cultural art magazine, described it as “the closest to a recorded Irish hooley”, a reference to an Irish party with music. The track, according to the magazine, sounded like “a few pints were drunk and the boxed bread was handed out before the gathered music greats decided to have a free musical for all.”

Patrick Moloney was born on August 1, 1938 in Donnycarney, north Dublin. His father, John, worked in the accounting department of the Irish Glass Bottle Company. His mother, Catherine (Conroy) Moloney, was a housewife.

Paddy came from a musical family: one of his grandfathers played the flute and his uncle Stephen played in the Ballyfin Pipe Band. Paddy started playing a plastic whistle at age 6 and began studying uileann pipes soon after, under the tutelage of a man known as the “King of the Pipes.”

He took up the bagpipe easily, gave his first public concert at the age of 9 and performed in the local streets.

“There were five bagpipers in the Donnycarney area,” he told Ireland’s Own magazine in 2019. “I was going around the cul-de-sac playing like the flute player, and my friends were following me behind me.”

After leaving school in the 1950s, he started working at Baxendale & Company, a building materials company, where he met his future wife, Rita O’Reilly. He joined the traditional Irish group Ceoltóirí Chualann in 1960 and formed the Chieftains in 1962; the name comes from the news “Death of a leader” by Irish writer John Montague.

In the 1960s and 1970s, Mr. Moloney was an executive with Claddagh Records, of which he was a founder, and produced or supervised 45 albums in folk, traditional, classical, poetry and spoken word.

The Chieftains – who hit hard in the mid-1970s with sold-out concerts at London’s Royal Albert Hall – were initially strictly an ensemble of instrumentalists. But in the 1980s, the band moved away from their original purism and Mr. Moloney emerged as a songwriter, writing new music steeped in Irish lore.

The Chieftains began to mix Irish music with styles from the Celtic diaspora in Spain and Canada as well as bluegrass and country from the United States. They have collaborated with well-known rock and pop musicians and with an international assortment of musicians as far away as Norway, Bulgaria and China.

Besides his wife and daughter, he is survived by two sons, Aonghus and Padraig; four grandchildren; and a sister, Sheila.

In 2012, on the 50th anniversary of their founding, the Chieftains teamed up with 12 folk, country, bluegrass, rockabilly and indie rock artists – including Bon Iver, the Decembrists, the Low Anthem and Imelda May – to record the album “Voice of Age.” They also embarked on a tour that ended at Carnegie Hall to The Saint Patrick.

“What’s going on here with these young bands,” Mr. Moloney told the New York Times at the time, explaining the concept of the album, “are they coming back to the melody, to the real stuff, to everyone’s roots and folk feeling I can hear any of them singing folk songs.