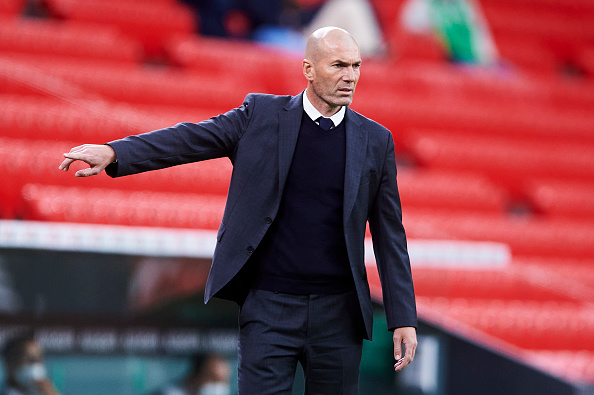 Manchester United’s Zinedine Zidane appointment could save the Red Devils

Is Zidane the perfect man to take United forward?

United have three points in two Champions League group stage games so far after losing their first game to Young Boys and sealing a late win over Villarreal thanks to a goal from Cristiano Ronaldo.

It’s an unmissable victory for Manchester United today, especially for Ole Gunnar Solskjaer whose future at the club looks uncertain after a poor start to the season.

If Solskjaer is shown the mid-season exit door, the first name on the list of substitutes is Zinedine Zidane. The French coach stepped down from his management role at Real Madrid last season after a trophy-less campaign and is now a free agent.

Manchester United need a series winner with immense tactical knowledge to lead the club forward. While Zinedine Zidane has been shortlisted to replace Ole, does the Frenchman fit the bill?

Despite his rather short managerial career, Zinedine Zidane has won 11 trophies with Real Madrid including the famous Champions League treble – a feat never before achieved in the history of the competition.

During his first managerial stint in the Spanish capital, Zidane displayed phenomenal man-management skills as he was able to manage a locker room filled with superstars like Cristiano Ronaldo, Gareth Bale, Sergio Ramos, and more. On his first stint, the Frenchman knew exactly how and when to use each player on his squad to get the most out of him and for the team.

Although Zinedine Zidane has great man-management skills, he is also tactically astute. For example, during his first three years at Real Madrid, he played counter-striker football to make the most of Cristiano Ronaldo’s scoring abilities.

When Zidane returned for the second time after the Ronaldo era, the Frenchman prioritized building an impenetrable defense. In the 2019/20 La Liga season, Real Madrid were crowned champions of Spain for a record 34e time while breaking the record for the fewest goals conceded in a season. Since Zidane no longer had Ronaldo by his side, the Frenchman crafted a tactical layout focused on maintaining strong defensive form rather than attacking freely.

Another notable quality of Zinedine Zidane during the 2019-20 La Liga season has been his ability to shoot goals from every player. Real Madrid finished the season as champions of Spain with 21 different league scorers, setting a new record.

In their last season in the Spanish capital, Real Madrid came close to winning La Liga despite more than 60 injuries during the season. The title race was cut short on the final matchday which saw Atletico Madrid crowned champions. Los Blancos have also reached the Champions League semi-final despite the club’s long list of injuries.

The 49-year-old is a proven series winner and is tactically astute and versatile. Zinedine Zidane doesn’t have a fixed football ideology but rather builds a system based on the squad he has.

At Manchester United, he would reunite with Cristiano Ronaldo and Raphael Varane, two pillars who were key players during his tenure as manager with Real Madrid. Zinedine Zidane also has a great sense of talent and improving youngsters. The likes of Mason Greenwood and Jadon Sancho could thrive under the Frenchman.

Besides his tactical qualities, Zinedine Zidane demands respect in a dressing room and his arrival could discipline the Manchester United squad even more. Players like Bruno Fernandes and Paul Pogba admire Zidane and would be ready to stay at the club longer if the Frenchman is named.

It’s been four seasons without a trophy for the Red Devils, the appointment of Zinedine Zidane as Manchester United manager might be enough to change that.