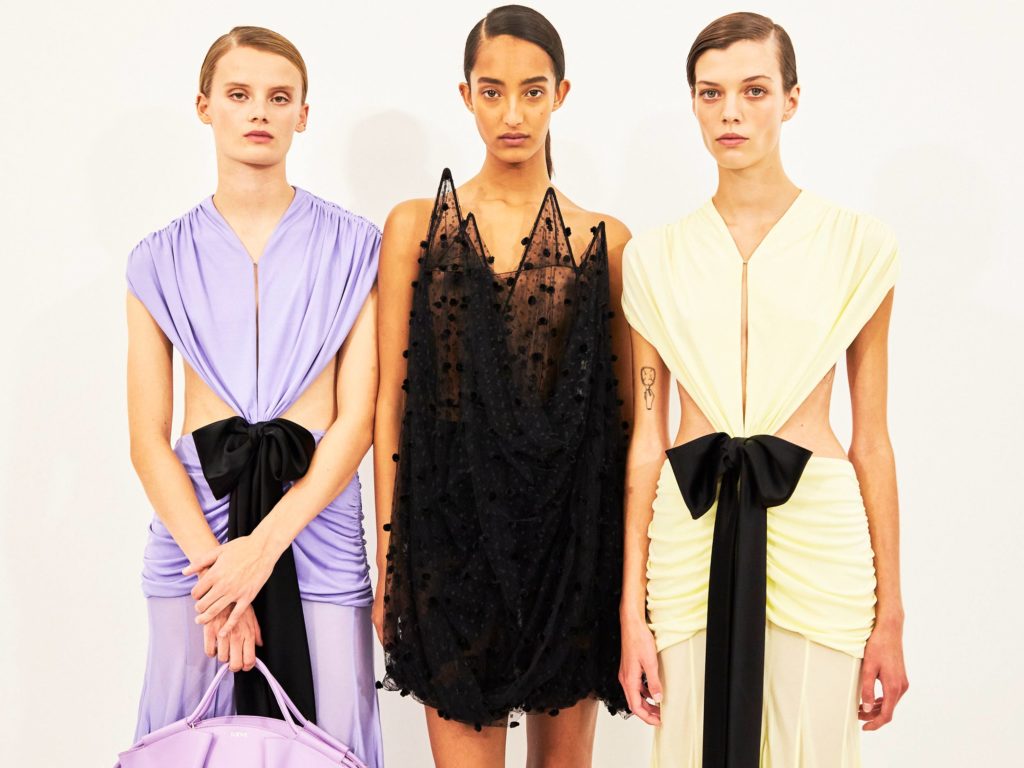 Inside the Loewe Spring/Summer 2023 show space, the floor was colorless, polished with a chaste sheen. The models rode onto the track from a perfectly square bottomless pit, from which emerged a colossal Jack-and-the-Beanstalk-like anthurium, deified in fiberglass. It was also here, in the equestrian arena of La Garde Républicaine in Paris, that Anderson presented his game-changing Spring/Summer 2022 collection, the one with all those iridescent jersey dresses with breasts and stilettos with shell shells. ‘egg. It was an explosive collection, turning the heads of every major fashion editor and prompting myriad Substack entries and Twitter feeds of high-fashion internet kids, who rarely sacrifice their carefully curated mystique for talk. From inside this brightly lit orthogonal rink – something out of a Raphael fresco – Anderson declared a new world order.

Attending Fashion Week can be a pretty empty experience. Often, one has the impression of desperately seeking beauty in an ocean of vanity; you rarely find what you are looking for (or what you were promised). Each performance is short-lived and fades quickly. Narcisse’s tormented lack of awareness is reflected in our black-mirrored phone screens, held by viewers like crested shields. This is not the case with Loewe. To contextualize the brand’s identity today, it’s important to remember that many have described Anderson’s work as “ugly or deliberately difficult.” He was among the first to blast British scallop-skirted, frilly-skirted androgyny on the catwalk; the models were crying out for a second look, and probably a third. But according to Anderson, he’s never tried to be overtly controversial — he’s just emotional and quite compulsive about achieving his goals. “I think you need to struggle,” he once said. “[If not,] you have nothing to fight for. 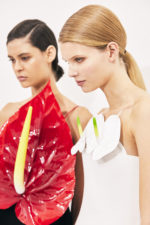 In a self-diagnosed, neurotic, post-pandemic I have nothing to lose state of mind, Jonathan Anderson also felt the pain of Narcissus. But unlike Narcissus, Anderson isn’t overly proud of the beauty of his design. He doesn’t look down on her, nor does he see her as a static self-portrait. For him, fashion is a vast horizon that scatters with every ray of sunshine or, in this particular case, a multitude of anthurium bouquets. When asked why anthuriums, Anderson said they are real things that look like fake. Loewe’s show notes, however, hint at the more subversive and sinister reasons Anderson was drawn to them: The pimply flesh of the rigidly erect apadix is ​​unmistakably a phallic gesture. Additionally, harboring insoluble calcium oxalate crystals in their capped leaves, these flowering plants are poisonous to the touch. Anderson has implemented his own kind of Freudian, surreal, and free association technique for applying flowers to this collection: they are molded into bodices and bra cups, anchored to vamps of stiletto heels, and suspended from leather bags.

Historically known for its exceptionally high quality leather goods, Loewe once counted members of the Spanish royal family among its frequent customers. Since his appointment as Creative Director, Anderson has seriously and lovingly tackled the important tradition of heritage-based craftsmanship. To cope with the institution of the atelier in the 2010s, he burst the artisanal fashion bubble – which the industry badly needed at the time – to unite art and design within the framework craftsmanship. By championing the craft – which emphasizes the transmission of the technique through non-Western family contexts (a tradition that was not yet welcomed by the Chambre Syndicale) – Anderson showed that it was possible to to apply her experimental affinities to the biggest fashion league possible.

After nearly a full decade at the helm of Loewe, Anderson’s provocation has changed course. He no longer makes handmade fashion, or clothes and accessories that double as handmade sculptures. The dexterity of his craftsmanship has endured, but his specific genealogies are concealed in order to free the original inspiration from the constraints of logic and censorship. This is what is curious about the ontological dilemma of fashion: its simplicity. A collection could largely depend on a singular flower motif; as highlighted in this season’s runway notes, this collection is defined by the syntax of ‘sharpened’ and ‘stripped’ design elements. By abandoning the world of the senses, Anderson is able to “amplify by the act of reduction”, and thus to enter the empty space of pure understanding. 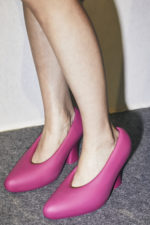 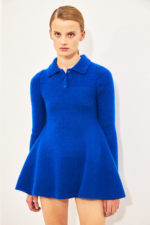 A pair of heels were gobbled up by a ridiculous assembly of deflated balloons, but a bare-boned version trailing behind appeared to be floatingly inflated on their own; short-sleeved striped mini-dresses appeared almost pleated, simulating a moiré effect as they bounced up and down the hips of its wearers; concealing invisible pyramidal structures, scraps of fabric freely took the form of form-fitting “dresses,” while defying the logic of gravitational drape; something like a bodice in the shape of a huge anthurium clung to a model’s torso, swallowing her almost whole but leaving her back bare. Down below, she wore nothing but high-cut knit panties, embodying an airy romanticism that could only be matched by the birth of Venus.

One set of looks that really got people talking were Anderson’s 8-bit-looking sweaters and pants: one-dimensional “pixel glitches,” as Anderson called them. As we contemplate these design cues, it may be time for us to return to the Narcissus problem: the Greek mythology that warned us against self-limitation has been forgotten by modern society, which tends to adhere to ideal of infinite progress. Anderson may have wanted to comment on the fact that all “originality” will soon fade in the ebb and flow of endless seasonal collections, eventually flattening out in the algorithm. He has successfully materialized the veneer of fashion, creating a delightfully consumable garment that will blend seamlessly into digital data in a wonderful, non-depressing way. Pixelation does not scare us. We wear QR codes on our sleeves. In fact, Anderson did just that: During the finale, he came out backstage wearing a Challengers sweater, promoting an upcoming movie for which he will serve as costume designer. Let fashion sway on the surface, it will trap you in the perpetual rhythm of its blossoming splendour.

Earlier this year, Rachel Tashjian wrote, “Whether you like what Jonathan Anderson is doing at Loewe or not, it’s probably the most important thing going on in luxury fashion. The question that remains is, how will he keep climbing higher? Well, as Anderson very clearly discovered, a good performance is a fleeting pantomime. As long as you keep up with the times, you will rise above the tide. The Gardens of Babylon have long been on our heartstrings, and there will be another spring to come. 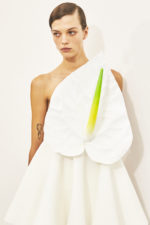 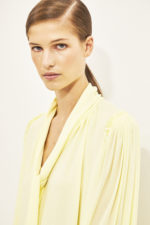 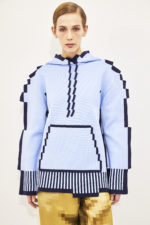 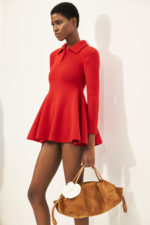 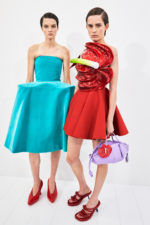 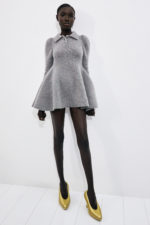 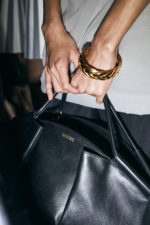 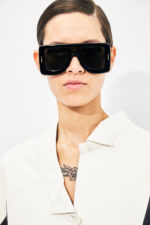 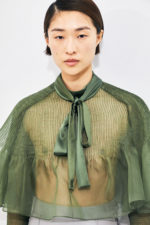 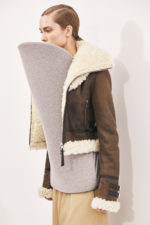 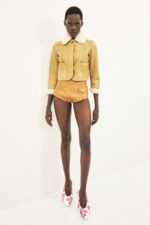 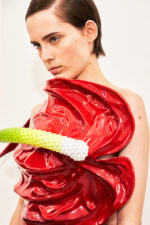 Can you afford your dream home? Calculate your mortgage payment