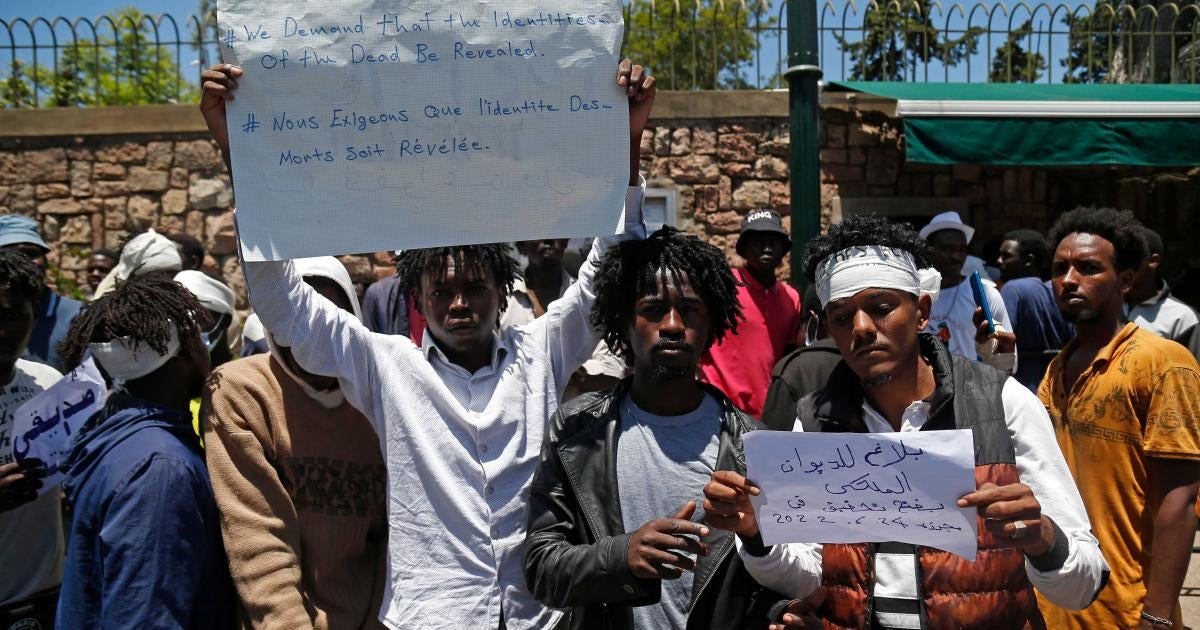 Morocco/Spain: Horrific deaths of migrants at the Melilla border

(Milan, June 29, 2022) – The deaths of at least 23 African men at the Melilla-Morocco border on June 24, 2022 require an independent and impartial investigation capable of determining what happened and who bears responsibility for these losses. of life, Human Rights Watch today said.

The deaths occurred during an attempt by as many as 2,000 people to enter Spain by scaling the high chain-link fences surrounding Melilla, one of Spain’s two enclaves in North Africa. An independent and impartial investigation should identify the causes of death and determine whether the security forces were responsible for the loss of life with a view to ensuring accountability and justice for the families of the victims.

“Videos and photographs show bodies strewn on the ground in pools of blood, Moroccan security forces kicking and beating people, and the Spanish Guardia Civil throwing tear gas at men hanging from fences said Judith Sunderland, Acting Deputy Director for Europe and Central Asia for Human Rights. Look. “Officials in Spain, Morocco and the European Union should condemn this violence and ensure effective and impartial investigations to bring justice to those who lost their lives.”

Human Rights Watch echoes calls from Moroccan and Spanish organizations, UN Human Rights Commissioner Michelle Bachelet, and the African Union for an investigation. African Union Commission Chairperson Moussa Faki Mahamat called for “an immediate investigation” and recalled obligations under international law “to treat all migrants with dignity and to prioritize their safety and to their human rights, while refraining from the use of excessive force”.

Information according to which the Moroccan authorities could organize rushed mass burials are deeply concerning, Human Rights Watch said. On June 26, the Moroccan Association for Human Rights (AMDH) posted on Twitter two photographs of what it believed to be between 16 and 21 graves are being dug at the cemetery in Sidi Salem, on the outskirts of Nador, the Moroccan town across the border from Melilla. The first of these photographs was posted on Twitter by AMDH at 1:01 p.m. local time on June 26.

By examining these photographs, Human Rights Watch was able to identify at least 10 freshly dug individual graves. The Spanish daily El País obtained a photograph of the same burial site which she posted on June 26. By matching the shape of the cemetery perimeter, as well as the buildings, trees, and landscape seen in the background with satellite imagery, Human Rights Watch independently verified the exact location of the graves at the Sidi Salem cemetery.

Satellite images collected on June 27, 2022 show recent ground disturbance at the location of the freshly dug graves identified in photographs verified by Human Rights Watch. These sightings were not visible in satellite images recorded on June 23, the day before the incident. The preservation of evidence is crucial to ensuring a complete investigation. To that end, it is vitally important that Moroccan authorities make every effort to preserve the bodies in a dignified and appropriate manner to allow for autopsies and verification of the cause of death, Human Rights Watch said.

Authorities should do everything possible to identify the dead and notify their families, Human Rights Watch said. Following the collection of forensic evidence of injuries and cause of death that may be relevant to the investigation, it is Morocco’s responsibility to arrange for the transfer of the deceased to his family for burial in accordance with his wishes. Survivors deserve appropriate health care and psychosocial (mental health) support.

In the early morning of June 24, between 1,300 and 2,000 men, mostly Sudanese and South Sudanese, media reported, attempted to scale the 6-10 meter chain-link fences separating Moroccan and Spanish territory. Moroccan authorities, as well as some independent observers, say some of the men were armed and violent, and people died in a stampede or after falling while climbing the fence.

However, videos show Moroccan security forces using excessive force, including beatings, and the actions of the Guardia Civil on the Spanish side are also raising concerns.

Video footage taken by AMDH in Morocco and analyzed by The New York Times shows a Moroccan security officer knocking obviously injured men to the ground and another officer throwing an inert body onto a pile of people.

Credible investigations into what happened should involve international experts and observers to reinforce, both in practice and in perception, impartiality, independence, and effectiveness, Human Rights Watch said.

Local authorities confirmed that 23 people died, while AMDH put the number at 27, but expressed concern that the death toll could rise. Caminando Fronteras, a Spanish organization, calculates that as many as 37 people lost their lives. Dozens were reportedly injured.

There are also indications that the Spanish Guardia Civil has summarily dismissed up to hundreds of people who managed to scale the fences and reach Melilla, which is Spanish territory. Official sources said around 500 people managed to reach Spain, but only 133 remained in Melilla. The Ministry of the Interior confirmed that “refoulements at the border have taken place” without specifying how many. “Border rejections” is the term used in Spanish law to refer to summary returns, through the gates of the fences around Ceuta and Melilla, without any procedural safeguards or the possibility of seeking asylum. This practice violates European and international law.

Video footage taken from the Spanish side of the fences shows Moroccan security forces among Guardia Civil officers and migrants. A Moroccan agent is seen walking a man off-camera, while the videographer recounts Moroccan agents arresting people in Spanish territory.

While Spanish Prime Minister Pedro Sanchez blamed ‘mafias’, the horrific events of June 24 were a predictable consequence of Spain’s emphasis on deterrence and outsourcing border control while turning a blind eye on Morocco’s abuses against migrants and refugees. In April, Spain and Morocco renewed their migration cooperation commitments after a period of diplomatic tensions between the two countries. The agreement enshrines an abusive model that has served as a blueprint for the EU’s approach to migration and asylum.

The borders around Ceuta and Melilla, the two Spanish enclaves, are among the most heavily fortified in Europe. Over the years, African migrants and asylum seekers have resorted to attempts to scale the fences surrounding the enclaves en masse due to the lack of safe and legal migration routes and obstacles to reaching official border crossings.

The European Court of Human Rights has made it clear in several cases concerning border control that while States can take measures to prevent unauthorized entry into their territory, including the use of force, the need to ‘a border control cannot justify the resort to practices or the use of force in a manner that violates human rights protections, including the right to life and freedom from inhuman treatment or degrading.

“On the other side of Europe, Ukrainian refugees are rightly welcomed with open arms, but here and elsewhere along Europe’s borders, we see a complete disregard for black lives,” said Sunderland. “The large-scale attempts to scale the fences around Melilla pose security concerns but in no way justify the violence we have seen. The men who died and the survivors deserve a credible investigation and that those responsible be held accountable. »

What does Pope Francis say in his new apostolic letter on the liturgy?