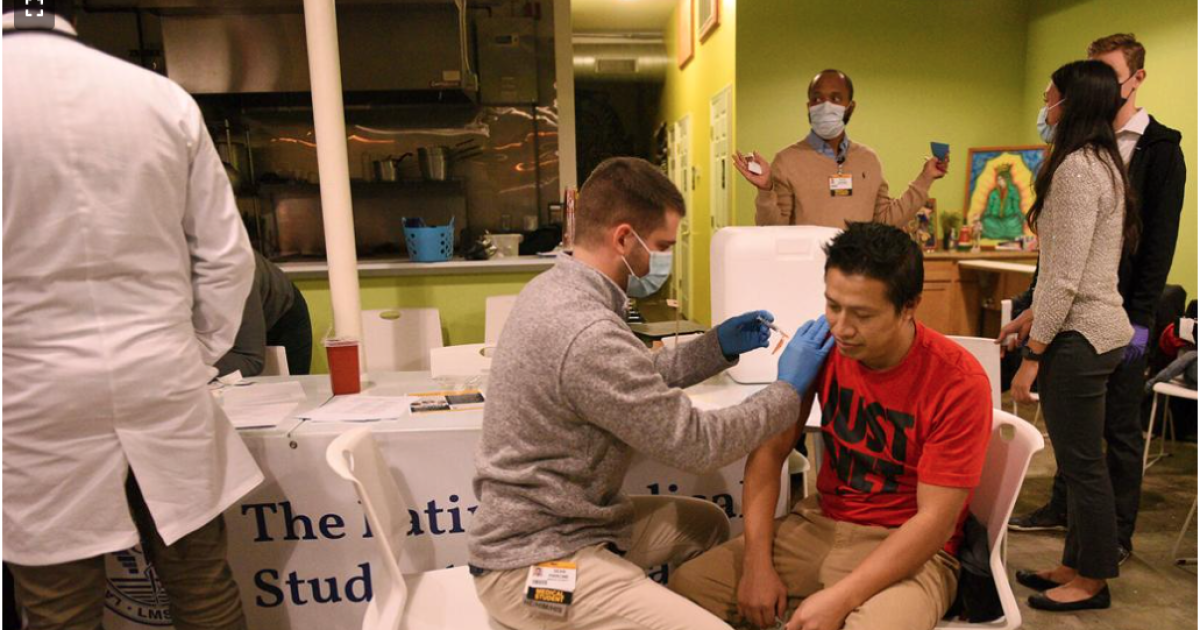 Benjamin Guillen, 51, a resident of Columbia, is his parents’ caretaker.

When the medical clinics they go to don’t offer services in Spanish, Guillen said staff use screen technology to translate.

Sometimes Guillen translates, although he still struggles to understand some English words himself.

“My mother, as a woman, would like to speak privately with the doctor,” Guillen said in Spanish. “For her, it’s complicated that her son has to listen to her problems and then be able to translate.”

According to the US Census American Community Survey 2021, 13.2% of the country’s population — more than 41 million people — speaks Spanish at home. In Missouri, the number of native Spanish speakers drops to 2.6%. But, while the state’s Hispanic population remains small, it increased by 42.6% during the previous decade. Boone County alone added 3,157 people to its Hispanic population between 2010 and 2020.

Studies show that Hispanics had the highest uninsured rate of any ethnic group in 2020. Lack of access to health insurance shapes hispanic healthas well as lack of preventive care and language and cultural barriers, according to the U.S. Department of Health and Human Services’ Office of Minority Health.

Connor Diaz, co-chair of the LMSA chapter of MU, said these barriers can create fear or mistrust when Spanish-speaking patients visit a clinic. He said he really felt the tension in the room with the patients.

Then he introduces himself: “Yo soy Connor Diaz. Yo be a student of medicina trabajando con su doctor. ¿Quieres hablar en Español?”

And the tension in the room is easing, Diaz said.

“We could do more”

The idea was born when Paola Orozco, who is Diaz’s co-president of LMSA, noticed the level of trust that opens up when she talks to patients in Spanish.

“Right there, I started to feel that we could do more in Columbia’s Latino community to be able to reach those people whose first language is Spanish,” Orozco said.

Andres Bran, an infectious disease expert at MU, oversaw the students’ on-site operations. More than anything, he said he would like to see more people get vaccinated.

“Mostly these are people who have risk factors, diabetes, uncontrolled blood pressure,” Bran said. “These are the people for whom things tend to get worse if they get the flu. The best is prevention. »

Guillen got a flu shot at the clinic on Monday. He said he believed one of the reasons for COVID-19 vaccine hesitancy in the Hispanic community was the lack of information in Spanish about the vaccine.

“But when I see someone who looks like me and speaks the same language, I feel a lot more comfortable saying, ‘Yeah, you should get me vaccinated,'” Bran said. “Usually people believe in those who look like them.”

Erika Hilario, a senior physics student at MU, also got her flu shot on Monday. She grew up translating at the doctor’s office for her father, who is originally from Mexico. Living in rural Sedalia, she said her father preferred to take care of his health in his own way, often self-diagnosing.

“I feel like he would be more comfortable going to something like this event,” Hilario said. “It’s something that I would like to gain more appeal for the community because there are a lot of Latinos here who feel like they don’t get that attention and the kind of respect that they deserve.”

Guillen hopes there will be permanent Spanish-speaking medical care in the area. Orozco said more frequent service is the goal.

Although there is no set date for the next clinic, Delgado said she hopes they will take place at least every few months. Conversations in local public schools to help young people understand health early on are one possibility. The students also want to add mental health and women’s health events in the future.

“We plan to go further down this path than it is now and hopefully reach many more Hispanic communities in Missouri,” Ortiz said.

Meeting patients in the community is an effort that comes with an initiative to train future physicians to better understand the Spanish-speaking communities they may one day serve.

Several of the students who have volunteered at the community clinic participate in an after-school course that teaches them to perform physical exams in Spanish. Diaz developed the course last year in collaboration with Celso Velazquez, a rheumatologist at MU.

Students who complete the Medical Spanish: Physical Examination course receive a certificate from LMSA and Students Interested in Global Health Tomorrow. Diaz said that after a quick introduction to the uses of medical Spanish, students take six lessons that cover interviewing patients and different aspects of a physical exam. Students work in pairs, using each other to practice skill sets. The course improves their ability to communicate in Spanish, but Diaz said he didn’t expect them to be expert in Spanish after completing the course.

Diaz didn’t expect interest to explode, but it did.

“The course is very basic, but a lot of people are interested,” Bran told Monday’s clinic. “And many students who volunteer here also help other people learn Spanish.”

“It shows you how much students value this course,” Diaz said.

Now the organizers are trying to figure out how they can best move it forward.

This year, they opened the course to pre-med and nursing students, aiming to create opportunities for mentorship and cross-departmental learning. In the future, they hope to have the course taught year-round and bring in community members to help students practice their Spanish with patients.

The process of becoming a Spanish medical interpreter can be long and expensive. According to National Certification Board for Medical Interpreters, applicants must have completed a 40-hour accredited medical interpreter training course or have a college transcript showing three credit hours of medical interpreter coursework. They must also demonstrate oral proficiency in English and Spanish and pass a written and oral exam.

“I would like all students to be certified medical Spanish interpreters by the time they graduate,” Diaz said. “This means that we will probably have to design a more longitudinal course that will be taught by a third party. The problem we are going to encounter is: how are we going to get this funding? »

Michael Hosokawa, senior associate dean for education and faculty development at MU’s medical school, wrote in an email that the medical school supports the interests of its students. Hosokawa added that the dean’s office provides a lump sum to the Medical Student Affairs Council. LMSA could apply for some of the student-run funds. Once qualified, the organization would submit an annual budget request.

“If students determined that Medical Spanish should be part of the medical student curriculum, they could submit a proposal/rationale to the Program Board for consideration,” Hosokawa wrote in the email. “Such a proposal should include a budget, objectives, assessment and learning strategies, and how such a course fits within the mission of the School of Medicine.”

Another option, Hosokawa added, would be to explore online certificate courses with minimal registration fees or work with other LMSA chapters to develop a learning activity that involves synchronous learning via Zoom. .

If organizers are unable to secure funding through the School of Medicine, Diaz said he will seek out available grant opportunities. But after noticing at a recent LMSA House of Delegates meeting that MU had more students interested in medical Spanish than other universities, he thinks there’s another opportunity there.

“They can be known as one of the best universities in the United States for training Spanish-speaking doctors,” Diaz said.

It is also about improving patient understanding by speaking in their language.

“These walls that are there, they’re falling down,” Diaz said. “You feel this interaction. It is very important because the intimacy of the doctor-patient relationship must be there. You should feel feelings.