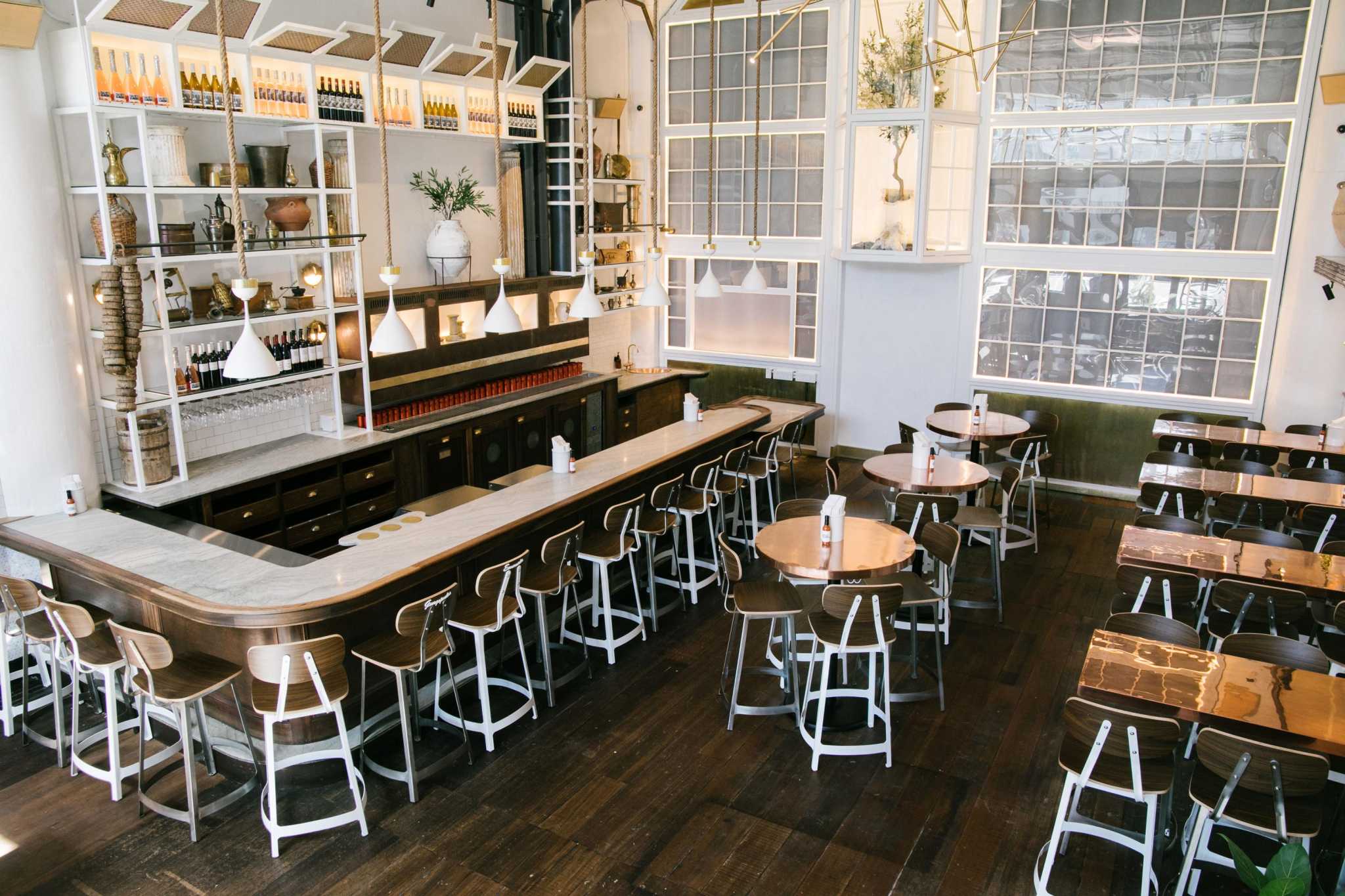 Souvla’s newest location, which opens Tuesday in San Francisco’s Dogpatch neighborhood, serves more than the standard menu of lamb pita sandwiches and chicken salads the fast-casual Greek chain is known for. This fifth outpost will also contain a bar with a wider and higher selection of Greek wines and a menu of traditional mezes like spanakopita and chilled octopus.

“For years I wanted to do something like this, but it was hard to execute as its own concept,” said owner Charles Bililies. When he secured this space, which had previously been a Magnolia Brewing bar, it seemed like a good opportunity to try out his restaurant idea within a restaurant. The restaurant is approximately 3,000 square feet – much larger than other Souvlas – with high ceilings and a marble bar.

Wine has always been present at Souvla, but never the focal point. The restaurants offer the only all-Greek beverage list in the United States, Bililies claimed, serving wine, beer, bottled water, tea and soda exclusively from Greece. Although wine accounts for less than 10% of Souvla’s total sales, the chain sells a good chunk of it. Souvla bottles a red, a white, a rosé, a sparkling wine and a retsina (a wine infused with pine resin) under its own brand. This year, he will import 60 pallets – the equivalent of around 40,000 bottles – of these wines alone.

This inexpensive wine selection made sense for Souvla’s laid-back model, because “no one wants to order a $75 bottle of wine with a $14 salad,” Bililies said. Also, Greek wine was a largely unknown entity to many Bay Area diners eight years ago when Souvla’s first location opened, so he didn’t want to overwhelm customers. Letting them choose between “Greek Red” and “Greek White” seemed enough. (There was a slightly longer reserve menu of wines by the bottle, for those who know how to ask for it.)

But Bililies’ dream has always been to showcase wine in a deeper way. Before founding Souvla, he worked as Deputy General Manager at RN74, the Michael Mina restaurant famous for its Burgundy cellar. After leaving that job in 2011, he took an extended trip to Greece, where importer Ted Diamantis helped arrange visits to many of the country’s top wine producers. When he founded Souvla, Bililies said, he had in mind that the company’s “incidental mission” would be to proselytize on behalf of Greek wines.

He had his work cut out for him. Many Americans had never tried Greek wine. Those who had often assumed that the only type of wine produced in Greece was retsina – an old tradition that originated when the ancient Greeks sealed wine vats with pine resin as a preservative during transport. In modern times, retsina has a bad reputation as a cheap mash with overpowering notes of turpentine and paint thinner. For this reason, Bililies did not serve as a retsina to Souvla initially.

But after receiving repeated requests, he started carrying a delicious modern version of Gai’a Estate, whose pine flavors are pleasant and harmonious – a Fernet lover’s retsina. In 2016, New York Times wine critic Eric Asimov recalled drinking Gai’a retsina in Souvla as one of his top 10 wine memories of the year.

Now Souvla Dogpatch is serving 10 new wines by the glass, all made from native Greek varietals in a range of styles. There’s no Chardonnay or Pinot Noir here, but rather grapes like lychee-flavored white Moscofilero ($14/glass), white Rhoditis, shaped like a delicious orange wine ($24), and red Xinomavro zesty and medium-bodied ($21). Souvla brand wines are also still available in half-carafe, carafe or bottle.

If you only try one wine, make it the Assyrtiko ($19) from Santo Wines on the island of Santorini. This white has become the poster child for Greek wine, and for good reason: it can be both tart and richly textured, with a pronounced note of sea salt reminiscent of the island air of Santorini. The most famous Assyrtikos, like the one from Domaine Sigalas, have become so popular in recent years that it is almost impossible for the Bililies to stock them in the restaurant. He compared it to a Greek version of white Burgundy.

If you’re going to order a second sip, you might consider the Skouras Megas Oenos ($22), a blend of the Greek Agiorgitiko variety with the French Cabernet Sauvignon variety. In Bililies’ opinion, it’s the closest thing in Greece to a premium Bordeaux wine – a flavorful, earthy red that’s capable of aging for several years.

Unlike other places in Souvla, patrons can find a seat at the bar, chat with the bartender, and order wines paired with bites such as sagnaki (fried cheese), Cretan dakos (tomato-feta salad), loukoumades (fried donuts ) and plant-based “lamb” meatballs in tomato sauce. A whole feta-brined roast chicken—which has long been available as a take-out off-menu item at other Souvla locations—is offered here for food service for the first time. Chef Tony Cervone will change the menu over time, Bililies said.

There’s still a counter near the entrance where patrons can order from the familiar Souvla menu, then pick up a number and sit at copper-clad tables. The new wine and meze lists are also available there, even for guests who are not seated at the bar. Bililies hopes the new restaurant model will expand the range of occasions Souvla can serve, whether someone wants a full meal of a pita sandwich with fries or just a light snack with a drink.

Although the bar itself hasn’t changed, most of the physical space is quite different from its Magnolia days. Bililies has closed off the once open kitchen and painted all the walls bright white. Behind the bar, he has installed a series of tchotchkes he brought back from Greece, which suggest the feeling of being in an exhibition of antiquities: faded clay amphorae, bronze jugs and other artifacts to eating and drinking are highlighted.

Souvla’s next location, which will open this fall in Marin County, will not include a meze or wine bar. But Bililies said he wouldn’t rule out installing a similar concept in future Souvla expansions. Or maybe it will add new restaurant types within restaurants.

“There are still at least six more Greek concepts that I really want to do,” he said.

Spain: 10 injured leaving a train stopped near a fire