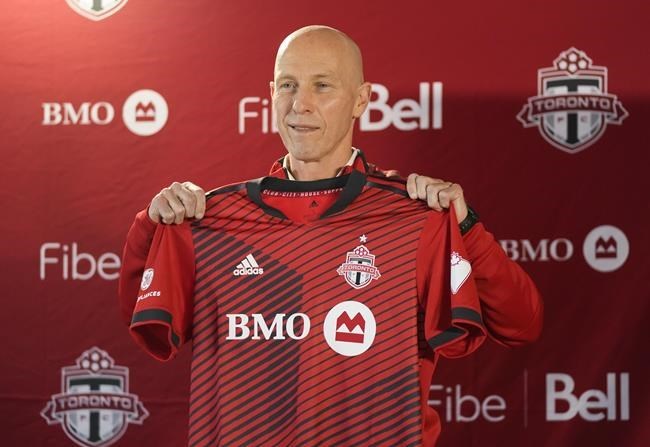 Toronto FC took a Scrabble-like approach to the offseason, switching players like letters in search of better combinations and a more harmonious hand after a dismal 6-18-10 season.

Toronto FC took a Scrabble-like approach to the offseason, switching players like letters in search of better combinations and a more harmonious hand after a dismal 6-18-10 season.

While the TFC remains a work in progress under new coach Bob Bradley, there is star quality waiting behind the scenes in the form of Italy’s Lorenzo Insigne and a host of young Canadian talent already in place.

Experienced Mexico international Carlos Salcedo is expected to partner with starter Chris Mavinga at the heart of a Toronto defense that can only go up after conceding a franchise-worst 66 goals.

The first test is Saturday at FC Dallas.

“I expect a good team that has a good coach and tries to impose their style, tries to put pressure on the opposition and tries to control possession,” Estevez said this week.

Bradley, who also serves as the team’s athletic director, provides experienced leadership and vision for the team. As his son Michael enters his ninth year at the club, the veteran coach has arrived with an excellent grasp of the ups and downs in Toronto.

While Bob Bradley preferred to look forward rather than backward, he clearly saw problems in the existing staff.

“One of the big challenges when you’re in a situation is trying to get a feel for where everyone is,” he said last month. “In different ways over the last year or even the last two years, I think with Toronto playing outside of Canada so often and the team didn’t do well last year , I immediately felt when I got here that there were just guys in different places, guys who weren’t as committed to the club as they could have been earlier .

“Guys who at different times just hadn’t been engaged in all of the things you need to do to be on a winning team. So we had to look at all of those different possibilities and see how we can try to move cheeky.”

“I think over the last two years inside the club there was a feeling that we needed a real refresh,” the Toronto captain said. “We had had a very good period for several years. COVID had hit our team hard and Canadian teams in general,

“And so as we went into last year and certainly through to the end of last year, I think there was a real sense and a real feeling among everyone at the club that now he was time, time to start making real change.”

But the makeover continues. On Friday, TFC had just 23 first-team players in camp, including injured Ayo Akinola and 21-year-old defender Luke Singh, who is expected to be loaned out soon.

“We’re still working on different things,” Bob Bradley said. “I still feel good about the depth we have in each position going into the first game.”

However, the questions abound.

Who will be No. 1 in goal with Alex Bono and Quentin Westberg having swapped the starting role over the past three seasons?

Can reassigned wingers Jacob Shaffelburg and Jahkeele Marshal-Rutty plus the addition of CPL Kadin Chung retain the full-back position with Brazil’s Richie Laryea and Auro having moved on and Justin Morrow retiring to take up a front office? Help is said to be on the way in the form of Italian Domenico Criscito, 35, who is currently at Genoa.

Can Spain playmaker Alejandro Pozuelo regain his 2020 MVP form after a disappointing, injury-plagued season last year that produced just one goal and four assists in 19 games?

With Akinola still working his way back from knee surgery, can Spanish newcomer Jesus Jimenez revive the attack?

What boost will it be to play in front of fans at BMO Field after the better part of two paid seasons elsewhere or at home with limited fans?

Can 19-year-old Canadian midfielder Ralph Priso step up and build on an impressive injury-shortened season in 2021?

“It’s an excited new band,” he said. “The starting point is that after a really disappointing year last year, the club was able to make a lot of changes and bring in new voices, fresh blood and find the right ways to freshen up the group.”

Youngsters should get the chance to show their stuff under Bob Bradley.

“When they arrive on the pitch, it’s because they’ve shown day after day that they’re ready and they’ve earned it,” he said. “I think we have talented young players. And as we start the season, some are more advanced than others, either through experience or in the moment, just physically.

“So there are still things that will take time, but I’m very encouraged by how all the youngsters have taken in ideas and shown some really good things throughout pre-season.”

Camp was tough under Bob Bradley.

“Lots of information. Lots of ideas. It was really physically demanding. There’s a good intensity to it – there’s a lot of young guys trying to prove themselves and hone their craft a bit. It’s been a good experience so far… It’s been very demanding physically but also very demanding mentally.”

With the departure of GM Ali Curtis, TFC is truly under new management. Team chairman Bill Manning hopes Bob Bradley can turn the tide and restore Toronto to its former glory – a club that made it to the MLS Cup Finals in 2016, 2017 and 2019 – by lifting the trophy in 2017.

Otherwise, the responsibility stops at his desk. All the others have left.

TORONTO FC AT A GLANCE

FADED AWAY: How much time do you have? Seventeen players from last season’s first team left, including designated players Jozy Altidore (New England) and Yeferson Soteldo (Tigers UANL of Mexico). The revolving door seems to be leaving with young defender Luke Singh who should be loaned to a CPL team, probably FC Edmonton.

IN: Italian striker Lorenzo Insigne won’t arrive until July, when his contract with Napoli expires. Spain striker Jesus Jimenez will be tasked with scoring goals until Ayo Akinola returns from knee surgery and Insigne arrives to bolster the attack. We are counting on the Mexican international central defender Carlos Salcedo to stabilize the defense.

QUESTION: Toronto are blessed with young talent with 12 players aged 24 and under on the first-team roster. Eleven of them are Canadian with four teenagers in Jahkeele Marshall-Rutty, 17, and Ralph Priso, Jayden Nelson and Deandre Kerr, 19. Can they thrive in 2022?

This report from The Canadian Press was first published on February 25, 2022