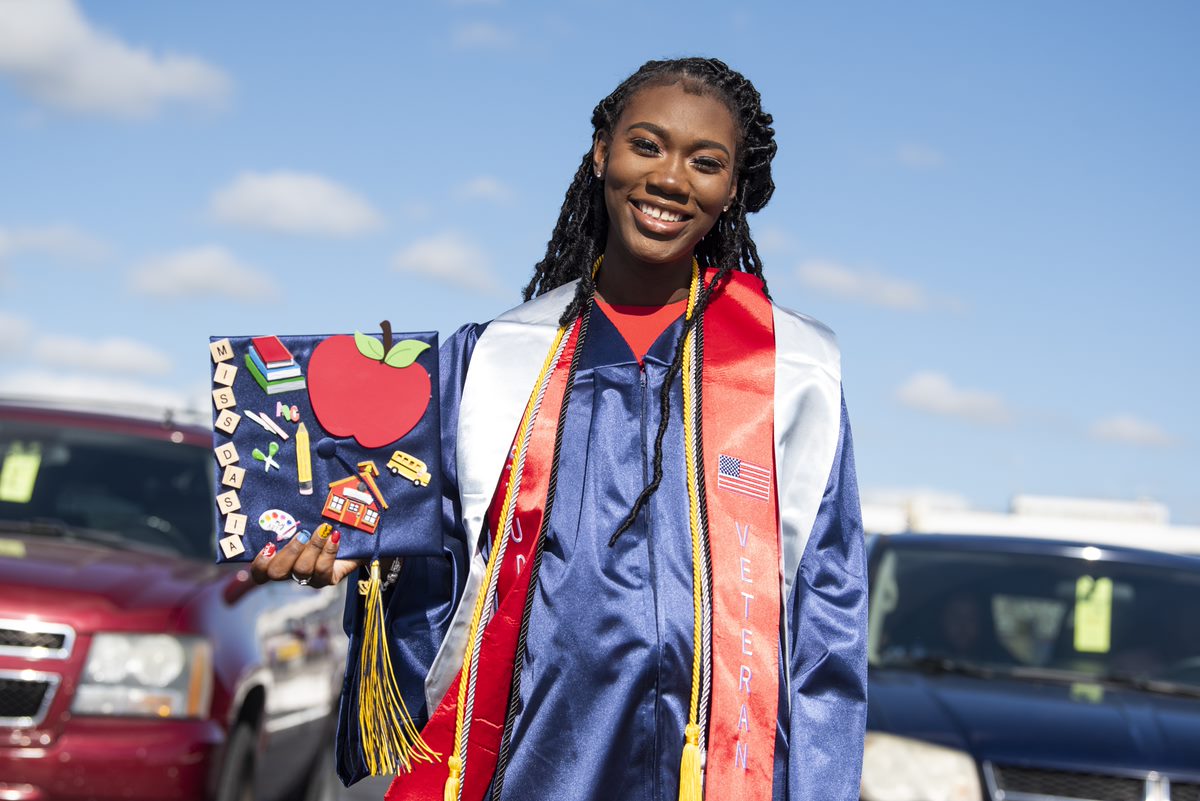 CONCORD — More than 400 cars lined up around the curves and straights of Charlotte Motor Speedway, but it wasn’t a race. In each car was a new graduate from Rowan-Cabarrus Community College, heading for his degree.

For the third year in a row, the college has chosen to offer students the opportunity to participate in a drive-in ceremony to offset potential COVID-related risks. This year, more than 1,000 students have qualified for graduation, and Sarah Devlin, the school’s director of governance, advancement and community relations, said more than 400 have registered. to participate. Each student was entitled to a car, but he could choose the person he wanted to accompany. And the escorts included everyone from parents to children to siblings, with some even hanging out at the windows to capture video.

As each car approached, RCCC President Dr. Carol Spalding leaned over to present her diploma and offer her best wishes and congratulations. A cameraman stood over his shoulder filming, and across the stadium this live stream appeared on a giant screen. A young man made sure his mother knew he was making history.

“Listen, Mom, I’m on TV,” he sang as his mother thanked Spalding for his graduation. Spalding noted that while the college will likely return to the traditional indoor graduation ceremony soon, she knows there are things about drive-thru that have been embraced by students, and her hope is to incorporate the best moments from today’s event into a throwback. to tradition.

Devlin said that although most, if not all, of the students live within driving distance of the college, since there is no accommodation provided, they do not all come from the same place in life. “Our students are of all ages, from all walks of life,” she said. “Some are changing careers, some are looking for an affordable education, some will be transfer students, some are looking for certifications that they can immediately enter the job market, but they are all trying to improve their lives. And each of them has a story.

Jasmine Rosenberry was in the first car leading the procession. As president of the Student Government Association for the past year and a class speaker, Rosenberry’s journey to graduation hasn’t been easy, but the smile on her face doesn’t betray the challenges. With sometimes intense family struggles, she was also diagnosed with rheumatoid arthritis at age 17. She graduated from Mt. Pleasant High School and then enrolled in RCCC, the first member of her family to attend college. She was introduced to student life and began to find her voice. Her future plans are to earn a bachelor’s degree in library science and then head to UNCG for a master’s degree that will allow her to become a librarian.

“Be proud of yourself,” was the direct advice she offered her comrades. “And people shouldn’t underestimate the value of a community college education. It can be just as rewarding and fulfilling as a four-year college, and can make a college education affordable when it otherwise wouldn’t be.

Thaisala Eubanks became a new mother at 17. Over the next few years, she expanded her family and took up a job that involved manual labor. Life has changed. Until she suffered two work-related injuries.

“I decided it was time to find a job using my brain instead of my body to earn money,” she said with a smile. She enrolled at RCCC to study criminal justice, and now, with her degree in hand, she will be moving on to Central University of North Carolina for a bachelor’s degree in the same subject, and already has a job planned in justice. for minors.

Jerry Leonard was driven by his son, Mason, who graduated from high school two years ago. Jerry Leonard was earning his second degree at RCCC. He earned his first degree in Industrial Systems Technology in 2005, which he put to good use in his work at Salisbury Rowan Utilities. On Thursday, he earned his second degree in Electrical Systems Technology.

He chose RCCC because “it’s close to home” and noted that graduation day “is a big relief”.

“I’m so proud of my dad,” Mason said with a smile.

Leonidas Lazo came to the United States from El Salvador at age 18, determined to make a success of his life. He got a full-time job at a big construction company and enrolled in RCCC, another student who is the first in his family to attend college. When he got to his first lesson he realized that his limited English wouldn’t allow him to keep up with his lessons, so he started recording every lesson on his phone and then coming home every night and doing it. translate into Spanish to be able to study. He worked on his English at the same time, eventually becoming fluent enough to handle lessons without translation. On Thursday, he graduated with a degree in construction management technology.

“When I think of my accomplishments, I think of the teachers and staff at Rowan-Cabarrus who supported me,” Lazo said. “My accomplishments are not only due to my efforts, but also to the encouragement they have given me along the way. Rowan-Cabarrus has helped replace my insecurities and fears with hope. My goal is to become a successful construction project manager and be a good example to others, showing them that with time and effort, anything is possible.

Some students whose lives were changed by the RCCC were not today’s graduates, but staff. Barb Meidl, director of student life and leadership, said she went from homelessness and an abusive relationship to classes at RCCC where she was introduced to work-study. After graduating, she stayed in college, progressing bit by bit, always invested in the students who came behind her.

“It really changed the whole trajectory of my life,” Meidl said. “That’s why I try to connect with as many students as possible. Because I know what it can mean to them, and I want them to know it.

“So many people see graduation as the end of something,” she said before braving the gusty winds that wreaked havoc with several graduation caps handing out diplomas and handshakes. . “It’s really their beginning. It’s their launchpad to the next stage of their life, and they can be an inspiration to others.