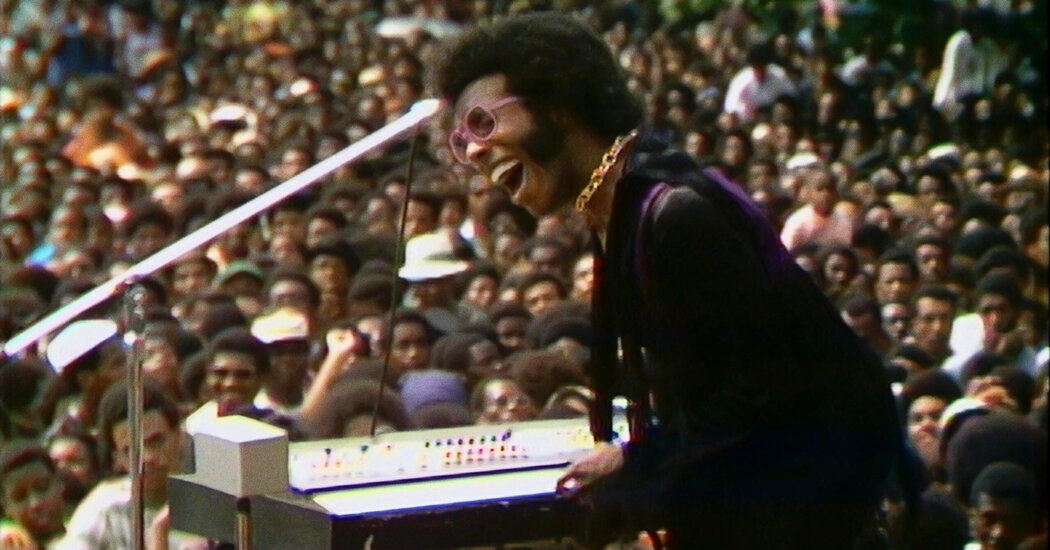 ‘Summer of Soul’ picks up on a concert documentary tradition

In the mid-2010s, popular music films dominated the Best Documentary Feature category at the Oscars. “Searching for Sugar Man,” “Twenty Feet From Stardom,” and “Amy” all won the award. It was an unexpected boom: in previous decades, non-classical music documentaries had only received sparse nominations.

All of these winning films were biographies or chronicles of a scene or community. This year, however, a nominated documentary is built around footage of a musical performance: “Summer of Soul,” about the 1969 Harlem Cultural Festival which featured Sly and the Family Stone, Nina Simone, Mahalia Jackson and Stevie Wonder, among others.

“This movie is a departure from the way the Oscars looked at music documentaries,” said Thom Powers, documentary programmer for the Toronto International Film Festival and host of the Pure Nonfiction podcast. “They were attracted to films based on music, but the heart of these films are not performances, they are other types of storytelling.”

Ironically, the only concert documentary to win an Oscar was 1971’s ‘Woodstock’, a film that cast a heavy shadow over ‘Summer of Soul’. The events of each film took place during the same season, but while the film capturing “Three Days of Peace and Music” on Max Yasgur’s farm became a benchmark for a generation, the footage of Harlem languished. .

Of course, “Summer of Soul” isn’t just a concert movie; its director, Ahmir “Questlove” Thompson, best known for his day job as a Roots drummer, dismissed this description of the project, and the film tackles multiple topics involving the politics of the time. But with its focus on the stage, “Summer of Soul” directly connects and reclaims the tradition of quality concert documentary, a form that has seen its reputation rise and fall during the rock era.

In the 1960s, concert documentaries were respected projects. ‘Jazz on a Summer’s Day’, which captured performances at the 1958 Newport Jazz Festival, from Louis Armstrong to Chuck Berry, is preserved at the National Film Registry, while Murray Lerner’s ‘Festival’, shot at the 1963 Newport Folk Festivals in 1966, was an Oscar nominee in 1968. Documentary pioneers like the Maysles Brothers and DA Pennebaker were involved in several musical films that helped define the era.

“These filmmakers were driven more by the principles of documentary film than by the music,” said Benjamin J. Harbert, author of “American Music Documentary” and associate professor of music at Georgetown University. “They were all older than the generation they were shooting on. They were kind of like anthropologists, trying to pull us into this changing world of 60s America.

Mia Mask, a film professor at Vassar College, noted similarities between “Summer of Soul” and films like “Gimme Shelter,” Maysles’ chronicle of the Rolling Stones’ chaotic and disastrous appearance at the 1969 Altamont festival. , or “Don’t Look Back,” Pennebaker’s document of Bob Dylan’s 1965 tour. “Like ‘Gimme Shelter,’ there’s no strong linear narrative, but the musical culture underpins a host of ‘other things,’ she said. ‘And ‘Don’t Look Back’ is more episodic, it captures moments along that concert track.” In those regards, she noted, ” ‘Summer of Soul’ recalls these seminal documentaries.”

In a phone interview, Thompson explained that his initial conception was something closer to a conventional concert documentary. “I was like, ‘I got 40 hours of footage and this must be 90 minutes,'” he said. “I know automatically, after 25 years of gigs, that if we have 90 minutes, that’s 14 songs. And there are way more artists than there is space for songs, so now I think in terms of cool mix tapes.

“I’m not saying I would have cut-and-pasted traditional documentary,” he continued, “but I probably would have told the story of a festival in Harlem and then expanded it to Spanish. Harlem and other cultures, and then would have opened it up in the global context, the African artists that were there, and that would have more or less been history.

But when the pandemic hit in March 2020, Thompson and his team had to recalibrate. Several interviews of artists present at the festival were abandoned and a new direction was imposed. “It stopped being just the concert footage once we got to the pandemic and our Jenga fell off,” he said. “We had to start at the top and be creative.”

After Woodstock, a wave of rock concert films inevitably followed, from Pink Floyd (to Pompeii!), David Bowie and the Grateful Dead, with the emerging phenomenon of midnight films at local art houses providing a constant outlet. .

This trend also affected black artists, with the release of documentaries like “Wattstax” and “Soul to Soul”, and others that were filmed but not released until many years later, such as “Soul Power” (from the festival of music attached to the 1974 Muhammad Ali-George Foreman fight featured in the Oscar-winning film “When We Were Kings”) and Aretha Franklin’s gospel performance “Amazing Grace.”

This era culminated in extremes: on the one hand, there were the comedic excesses of Led Zeppelin’s “The Song Remains the Same” (1976), with absurd whimsical sequences and cuts from different shows, so that the outfits of the group sometimes change during the same period. single song. On the other, Martin Scorsese’s “The Last Waltz” (1978) captured the final performance of The Band’s original lineup, with a cavalcade of guests representing all of the band’s influences and history. “The Last Waltz” is often described as the best example of the form, but Dr. Herbert also noted that some have called it “the death of the concert movie, with all the rock celebrity pans and jokes at the back.” interior and every plan so methodically planned.”

A few years later, MTV radically and permanently changed the relationship between audiences and music on film. With the addition of series like ‘MTV Unplugged’ it has become much more common to watch musical performances; the concert film was no longer reserved for the pop elite. To stand out, it took something exceptional, like 1984’s “Stop Making Sense” – balancing the Talking Heads’ innovative staging and the radical simplicity of Jonathan Demme’s direction – or the unparalleled virtuosity displayed in ” Sign o’ the Times” by Prince in 1987.

Dr Mask said that over time, documentaries have “moved away from the cinema vrai style towards more storytelling with a more commercial appeal. We’re seeing a real shift with something like Madonna’s “Truth or Dare” and those films of the 80s and early 90s that wanted to flip the concert film on its head and make it into something completely different. Now Beyoncé is doing her own version with projects like “Lemonade” and “Homecoming.”

Musicians have made concert films to chronicle special events (“Shut Up and Play the Hits” by LCD Soundsystem in 2012, shot during the group’s “farewell” concert — a farewell that lasted until its reunion in 2015) or experimenting with the technique (the Beastie Boys in 2006’s “Awesome”, composed entirely of footage taken by members of the crowd). More recently, with the perpetual need for content from streaming services, movies of pop stars like Shawn Mendes and Ariana Grande in concert have become promotional staples.

Beyond his incorporation of local and global events in 1969, what’s different about “Summer of Soul” is Thompson’s editing approach, which was based on his background as a musician and especially a DJ.” When I was stuck, my producer and editor would say, ‘If this was a DJ gig, what would you do next?’” Thompson explained, adding, “If this movie was my favorite Public Enemy album or a DJ set I was doing, how could I cut and scratch and go to the next thing?”

Powers agreed that this construct is ultimately what sets the film apart from a traditional concert documentary: “It does this wonderful job of blending commentary and music. You get the gig, but you also get that layer of music history so cleverly woven into the discussion.

“Summer of Soul” comes at a contemporary time of deep questions surrounding race and politics, and the story it tells of the culture and context surrounding the Harlem Cultural Festival is needed. But it’s also important, as with any great concert film, that the magnificent performances at the heart of the project are recognized in their own way.

“It benefits from heightened political awareness, but it also allows you to see these talented people on display, appreciated by a black audience,” Dr Mask said, adding, “We’re used to turning on the news and d Hear about Black Pain. ‘Summer of Soul’ gives audiences the opportunity to celebrate Black Joy.