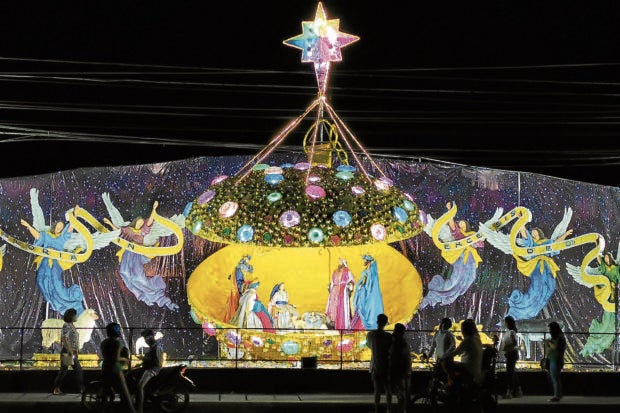 DIVINE SCENE: A golden medallion reveals the Holy Family in the “belen” (Nativity diorama) produced by soldiers belonging to the North Luzon Command (Nolcom) of the Armed Forces of the Philippines in Tarlac City for this year’s “Belenismo” . Nolcom is a hall of fame for the large non-municipal competition category. â€”WILLIE LOMIBAO

For the past 14 years, towns, villages, civic organizations and even the military have set up their dioramas along the stretches of Tarlac roads for the annual “Belenismo” (Spanish for the crib) to remind people that Christmas , it is the birth of Jesus Christ.

The event, which is both a competition and a spiritual advocacy, was designed in 2007 by the late Fr. Alex Bautista, licensed architect of the Diocese of Tarlac. Belenismo has been organized annually with the help of the Tarlac Convention and Visitors Bureau, the provincial government and the Tarlac Heritage Foundation.

One of this year’s attractions is a â€œfloatingâ€ belen, which its makers say symbolizes the power of sharing that has supported Filipinos in the second year of the pandemic.

The diorama features mannequins representing the Holy Family – the infant Jesus, Joseph and Mary – dressed in white as they ride a “balsa” (raft) to meet the Three Kings who are on a separate ship. The floating belen is the entrance to the pastoral station of the Holy Spirit in Barangay San Luis. It’s anchored atop a pond, which is lit at night by hundreds of candles perched on coconut shells.

â€œThis belen reminds us of our duty to take care and also to share with the needy. Don’t let the pandemic be the reason to turn off the lights in the Giving Room. Instead, use it as an inspiration to let others see the light and invite them to draw closer to the Savior and the Healer, â€said Fr. Randy Salunga, who designed the belen.

Placing the Holy Family on a boat is a â€œmessage of hope,â€ said the priest. 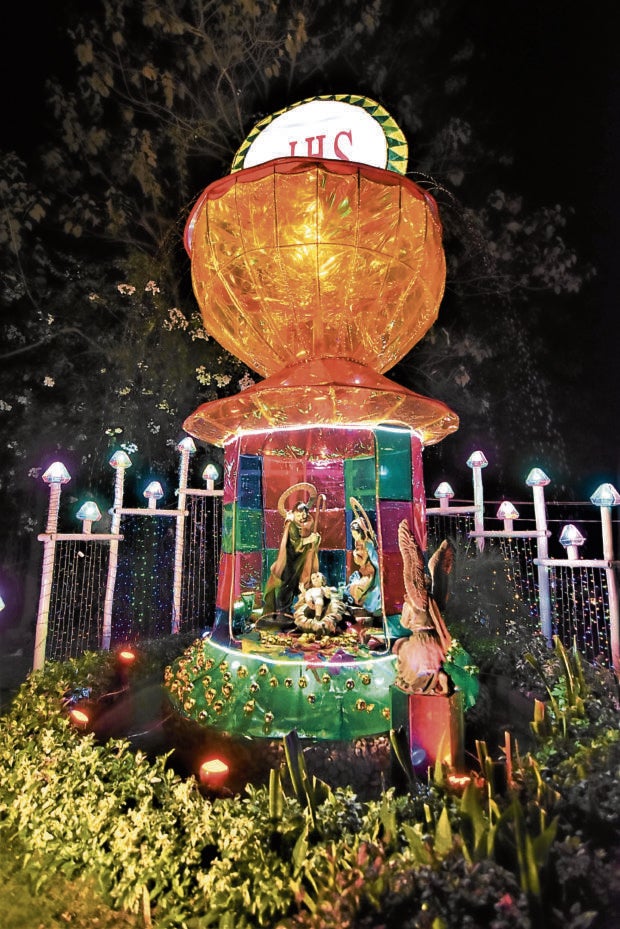 AGLOW A multicolored chalice encloses the Holy Family in a “belen” created by the parish of San Lorenzo Ruiz of Tarlac City. It was one of the popular entries of the 14th staging of Tarlac’s “Belenismo” and won first prize in the non-municipal category. â€”RAY ZAMBRANO

â€œSa paglalayag natin kasama natin ang Panginoon, hindi tayo nag-iisa (We are never alone on our journey because God is by our side). It is a Christmas message that assures us that God is with us now as we face this long battle against the pandemic, â€said Salunga.

A distinct feature of the floating belen is a Christmas â€œcommunity pantryâ€, where the purchase of one kilogram of tilapia by a donor is matched by another kilogram that goes to the needy.

He said they took the time to study how the belen would float and how the dummies would stay stable during strong gusts of wind.

They joined the annual competition, hoping to use the prize money to buy food for people isolated at church-run quarantine sites.

The diorama set up by the Chapel of Our Lady of Lourdes in Barangay Balanti depicts the biblical flight to Egypt, and features the Holy Family bidding farewell to the sages and shepherds as they prepare to escape on board from a Caritas Tarlac jeepney soldiers under the command of King Herod. The figurines were made from twigs and old clothes.

In the foreground of the belen are crates of vegetables and fruit commonly seen at the Balanti Farmers Market, a shopping area at Balanti Bridge set up by Balanti’s Riverside Organic Farmers Association where farmers sell produce costs. 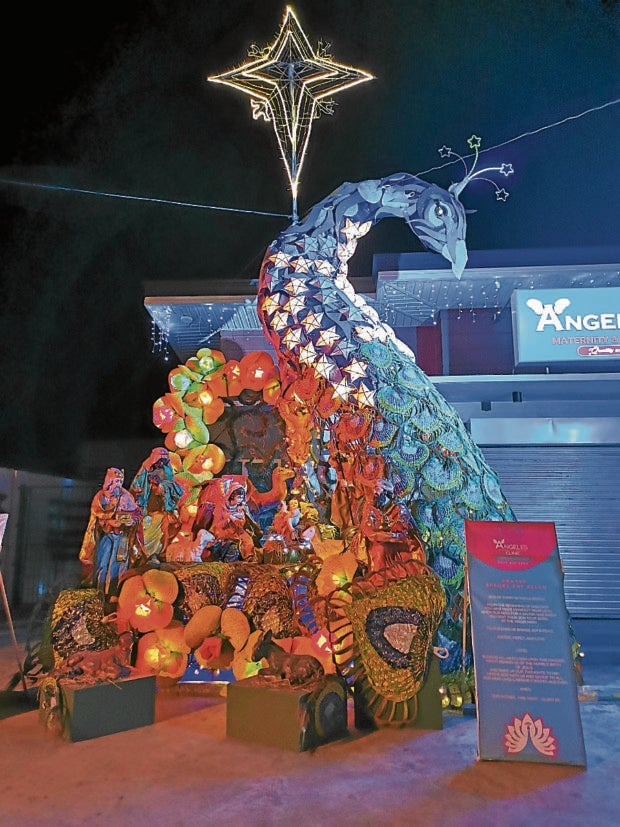 SYMBOL OF HOPE The Holy Family rides a majestic peacock in the “belen” made by Angeles Maternity and Medical Clinic in Tarlac City. This
won first prize in the monumental category. â€”WILLIE LOMIBAO

The harvests are conceived as â€œpabaonâ€ (provisions) for the Holy Family. Their jeepney bears the phrase â€œChurch of the Poorâ€.

The belen of the parish of the Saint-FranÃ§ois mission in the town of Anao sits in front of the “Chalice of Life”, made of woven bamboo strips painted in silver and gold and decorated with painted coconut shells resembling to grapes. Abaca’s fans were spread out like flowers surrounding the Holy Family.

Intended to “rekindle the essence of the gift of life which is full of love, compassion and faithfulness,” the parish entrance was ranked third in the church category during the award ceremony on 9 and December 10.

The agricultural-inspired belen of the town of San Clemente became the facade of the town hall. The belen was designed by JM Modomo who reused materials from last year’s entryway – rattan shaped into a grape shape, “anahaw” for leaves and bamboo. A hall of fame, the belen entrances to San Clemente have been well regarded for the use of native materials.

This year’s entry by the popular Taguiporo Giants Association in Sta. The town of Ignacia, which won first prize in the community category, finds the statues of the Holy Family inside a large clam filled with tuna, octopus, crabs and other seafood. The clothes of the statues were made of sea shells.

The Armed Forces of the Philippines installed a belen with a gold medallion surrounding the Holy Family in front of the Northern Luzon Command Headquarters at Camp Servillano Aquino in Tarlac City. He said the locket represented the divine nature of Christmas which can be found in the hearts of every Filipino.

The entry of the Baluyut family, in the monumental category, also won the first prize. Designed by Jojo Baluyut of Tarlac City, the â€œBelen Dalanginanâ€ depicts a moment of thanksgiving and appreciation for the blessings Filipinos receive.

Carrying the â€œplantdemicâ€ theme, Baluyut surrounded the Holy Family with plants and placed an angel behind the images. Three panels made of woven bamboo adorned with lights served as a backdrop.

The Sto. The entrance to the parish of Nino in the town of Bamban features an arch made up of large red and white gifts on the facade of the belen.

The arch and the facade served as an entrance where the three wise men were placed as if they were greeting each visitor crossing the belen. Inside is a belen created by the youth of the parish that features recycled materials such as plastic forks, spoons, metal foils and aluminum.

The Holy Family is presented in a huge gift box. â€œThe ultimate gift we will receive at Christmas is Jesus and the salvation and hope that he will guide us,â€ said Jerome Neil Dayrit, Sto member. Group of young people from the parish of Nino.

A prominent family in the town of Bamban produced a non-competitive belen that celebrates 500 years of Christianity in the Philippines, with the Holy Family on a banca as a backdrop by Dutch impressionist Vincent van Gogh’s rendering of a starry night made of eggshells and bottle caps. A small Filipino flag is attached to the banca.