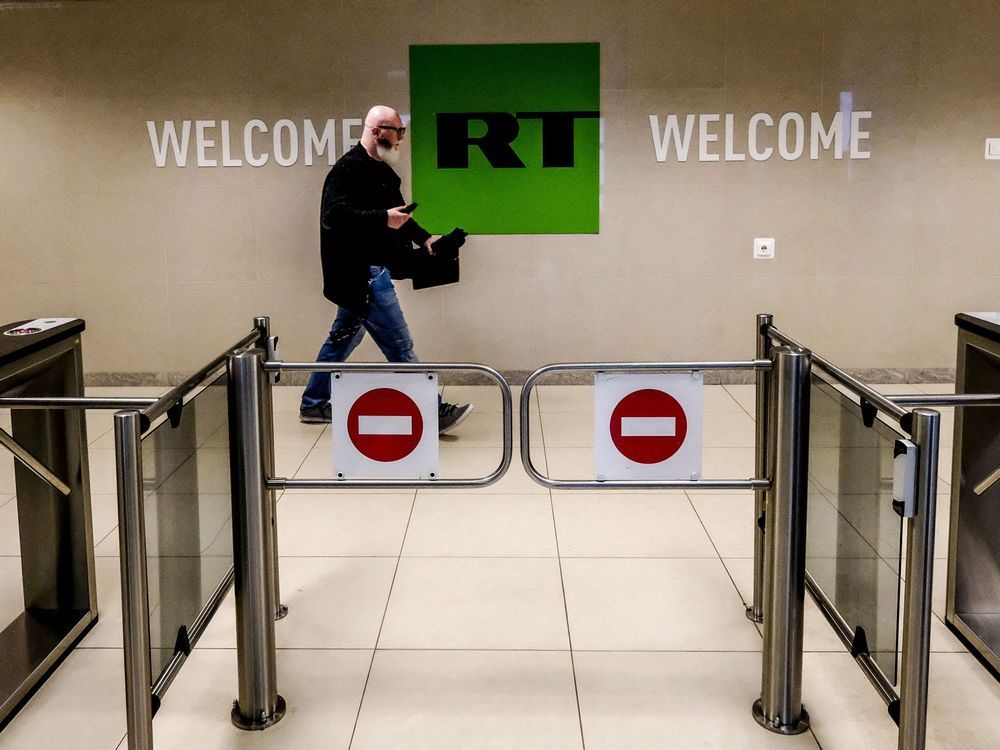 Viewers in British Columbia will no longer be able to get Russia Today TV through the province’s two major cable companies after Telus and Shaw announced they had banned the Russian government’s “propaganda” arm.

The companies have reversed their stance on allowing RT TV into their lineups after the country’s other major telecommunications companies, Bell and Rogers, announced over the weekend that they were abandoning the station following the invasion of the Ukraine by Russia.

Both Telus and Shaw announced the change on social media on Sunday.

“I commend Bell for removing RT,” tweeted Canadian Heritage Minister Pablo Rodriguez, head of the Canadian Radio-television and Telecommunications Commission. “Russia has been waging a war in Ukraine since 2014, and an information war across the world.”

He said: “RT is the propaganda arm of the Putin regime that spreads disinformation. He has no place here. »

“The RT channel is on the list of non-Canadian channels approved for distribution in Canada,” CRTC spokesman Eric Rancourt said in an email Monday. “The CRTC has received complaints about RT from citizens and is analyzing the situation.

“The CRTC does not censor content,” he said in an email Friday. But all broadcasters are expected to “ensure that information is represented accurately and without bias”.

James Moore, former BC MP and former heritage minister, after the invasion urged the CRTC to ban RT TV.

“Since the station broadcasts a message and essentially military propaganda,” the CRTC should ban it from Canadian airways, he later said.

“I would call it an insidious television network. Its purpose is to undermine Western democracy,” said Barbara O’Neil, a Vancouver Island woman who has been asking Shaw for years to remove it from its cable line.

“It is deeply concerning… that RT is allowed to bring Russian disinformation and propaganda into Canadian homes,” said documentary filmmaker Marcus Kolga, a senior fellow at the Macdonald-Laurier Institute and an expert on social issues. Europe, including the use of media strategies as tools from abroad. politics and defence.

“It’s psychological warfare, it’s government-cognitive warfare. RT looks as brilliant as CTV or the BBC and it doesn’t come across as state-sanctioned government propaganda,” he said. “Some Canadians might be fooled by this. And the Russians would rather the Canadians (be fooled). »

In the aftermath of Russia’s invasion of Ukraine last week, RT TV aired numerous headlines, clips and interviews emphasizing Russia’s official stance on the invasion, including claiming that no Ukrainian citizens would be harmed and that Russia would not occupy the country.

Other governments are considering allowing RT TV in their countries. The British government could ban it, but some British MPs fear Putin will retaliate by banning the BBC, Britain’s public broadcaster, from Russia.

And in 2018, France passed a law that allows its broadcasting agency to suspend or terminate the licenses of any broadcaster under the influence of foreign states as part of broader legislation to combat misinformation that could affect electoral integrity, said University of British Columbia political science professor Chris Tenove. in an email.

The day after Russia invaded Ukraine, RT TV aired an interview with a commentator accusing the Ukrainian government of “creating a sea of ​​blood” in a disputed region. Another specialist who justified Russia’s military and political goals said: “Ukraine will enjoy the status of a neutral power.”

RT TV reportedly has a budget of over $200 million per year for its global operations. It broadcasts in at least five languages, including English, Spanish, Arabic, German, and French.

— With files by Douglas Todd

More news, fewer ads, faster loading times: Get unlimited, lightweight access to the Vancouver Sun, The Province, National Post and 13 other Canadian news sites for just $14/month or $140/year. Subscribe now through The Vancouver Sun or The Province.

Sign up to receive daily news from the Vancouver Sun, a division of Postmedia Network Inc.

Thank you for your registration!

A welcome email is on the way. If you don’t see it, please check your spam folder.

The next issue of Vancouver Sun Headline News will soon be in your inbox.

We encountered a problem during your registration. Try Again