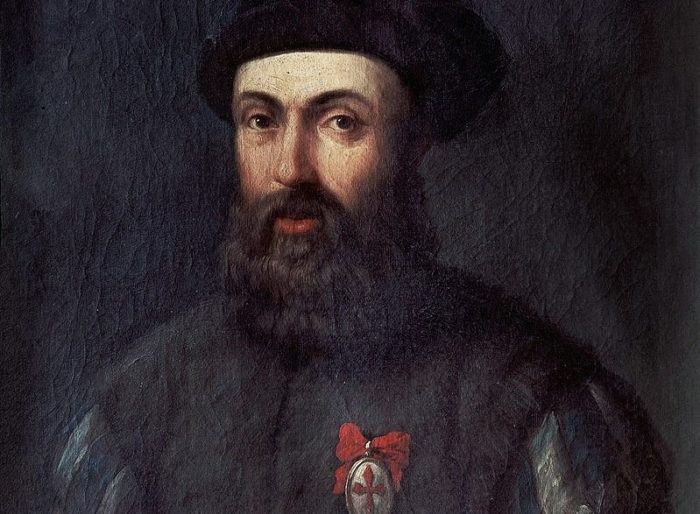 Ferdinand Magellan had eight Greek sailors in his crew when the great Portuguese explorer circled the Earth for the first time in history.

In a new book titled “Greek Sailors on the First Round of the Earth”, author Pedro Olalla tells the story of the Greek sailors who joined Magellan on this ambitious voyage.

About 500 years ago, the great explorer attempted the perilous expedition. In the only ship that managed to return three years later, some of the survivors were Greeks.

Among them was the navigator who brought him back to port and documented his unprecedented route which was a great leap in human history.

Spanish Hellenist author Pedro Olalla (b.1966) is a professor, filmmaker and photographer who has written several books on modern and ancient Greek history, culture and archeology.

His literary and audiovisual works study and promote Greek culture. They are distinguished by the strong personal idiom of the creator, which is combined with literary, scientific and artistic elements.

He is also a Knight of the Order of Civil Merit in Spain and an associate member of the Center for Greek Studies at Harvard University.

In her current book, Olalla tells the little-known story of the Greek sailors who joined Magellan on the first round of the earth.

The book also includes the text of the lecture that the Spanish Hellenist and author gave in Greek at the historic “Lodge of Spain” for the Knights of St. John in Rhodes, on the occasion of the inauguration of the monument in honor of Greek sailors. .

The Spanish Embassy also published the expedition logbook translated into three languages â€‹â€‹on the occasion of the inauguration of the monument.

The conference was commissioned by the Spanish Embassy in Greece and the Cervantes Institute in Athens and was based on research by Spanish and Greek historians.

Greek sailors who explored with Magellan

On September 20, 1519, five ships left the Spanish port of Sanlucar de Barrameda for the most fascinating voyage in the history of the modern world.

Portuguese sailor Ferdinand Magellan embarked on an ambitious mission on behalf of Spain to discover a short route to the Spice Islands, in the company of 240 adventurous sailors.

Very few know that at the end of the first voyage around the planet there were eight Greeks, and that the pilot of the “Victoria”, the only ship that managed to return, was Greek.

His name was Francisco Albo and he was from the island of Chios. The logbook he kept is one of the most valuable documents in the history of navigation.

Albo’s logbook documents the journey, the unknown places the sailors have encountered, the unprecedented adventures they have had as the first humans to cross all of the Earth’s meridians.

Magellan was killed by native soldiers in the Philippines, but eighteen men returned alive, including five Greeks.

Nine Greek names are inscribed on the list of sailors kept in the Archives of Seville:

Albo, along with expedition second-in-command Juan Sebastian Elcano, appears before Emperor Charles I of Spain to inform him of the success of the three-year journey.

Among the Greek sailors who joined Magellan, Miguel de Rodas received the honor of Knight of the Order of Saint James and Grand Pilot of His Majesty.

He was also tasked with taking charge of the Emperor’s secret cartography and the responsibility of organizing the next missions to the New World.

The Greek contribution to nautical missions

“The contribution of the Greeks to the exploratory missions of this time is important”, writes Olalla in her book.

â€œAlong with the renaissance of science, there has been a maritime renaissance with the rediscovery of maritime knowledge not only through the classical and Alexandrian maritime tradition of the Greeks, but also from older times, such as the Minoan eraâ€, another part of the book says.

â€œFrom the 13th century and beyond, when the Latins merged with the Greeks, there was a nautical renaissance that allowed for great explorations in a new and more dynamic way,â€ Olalla wrote.

Born February 4, 1480 into a noble Portuguese family, Ferdinand Magellan saw his parents die when he was still a boy and he became a page at the Lisbon court.

In 1505, he joined the fleet of the Portuguese viceroy in India, and spent the following years on expeditions to India and Africa.

In 1511 he was with the fleet that conquered Malacca (on the Malay Peninsula), and the Portuguese took control of the region’s most important trade routes. He also explored the Spice Islands).

The following year, Magellan returned to Lisbon, and in 1513, he was injured during an expedition to Morocco, leaving him permanently limp.

In 1517 he had a dispute with the Portuguese king and traveled to Spain to seek the support of the Spanish Emperor for an expedition to reach the Moluccas by sailing west.

The Spaniards wanted a share in the Moluccan spice trade, but the Portuguese controlled the route east around southern Africa.

Magellan convinced the Spanish Emperor to follow the route west, and in September 1519 set out with a fleet of five ships, four carracks and a caravel, and about 270 men.

There were eight Greek sailors among the crews of Magellan’s ships and the expedition experienced many difficulties from the start.

The weather was harsh, there was a mutiny in one of the ships, a lack of provisions, the sailors were suffering from scurvy, and the unknown waters made a mission perilous.

Despite all obstacles, Magellan managed to cross the Atlantic and navigate the straits of the southern tip of South America that would later bear his name.

From there, with only three ships left, Magellan sailed the Pacific, but the lack of supplies resulted in many deaths from starvation and scurvy.

After three months, the mission reached an island, probably Guam, in the western Pacific. From there they sailed to today’s Philippines.

Once there, Magellan got involved in a battle between two rival local leaders and was killed. It was April 27, 1521.

The only ship that remained was the ‘Victoria’ with Francisco Albo at the helm. He finally reached Spain in September 1522, having completed the very first round-the-world trip.