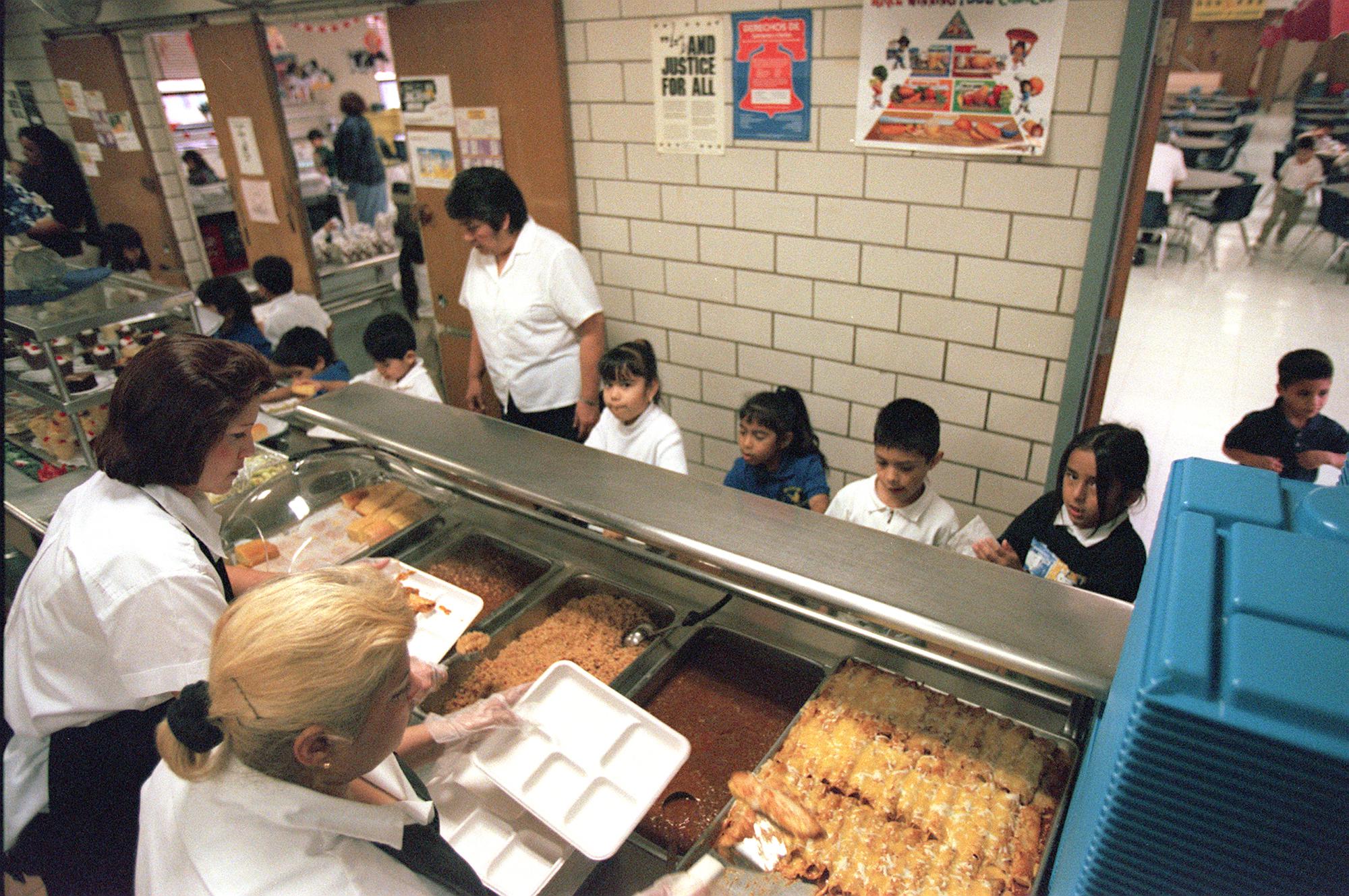 The History of Enchilada Wednesday in San Antonio

I’m from San Antonio, born and raised, and have lived in New York for 20 years. When I meet other Texpats (expats from Texas), the conversation often turns to food. One of the things I often bring up is that while Taco Tuesday is very popular now, in San Antonio we had Enchilada Wednesdays. This was mostly in schools where enchiladas were on the school cafeteria menu every week on Wednesdays. Surprisingly, most people don’t know what I’m talking about. So I wonder: Are Enchilada Wednesdays just a San Antonio thing? When, where and why did this tradition start?

Trigger Warning: If you’re the least bit hungry, this column could trigger an intense craving for enchiladas.

There are reports of enchiladas in Arlington, Dallas, Laredo, New Braunfels, Victoria, and Schertz (which also had sausage and sauerkraut days), as well as throughout the Rio Grande Valley. The tradition probably started here, however, around the same time as the idea of ​​the hot lunch being sold in schools.

When this topic was last discussed 30 years ago, a retired local teacher, Jan Gates, said Bonham Elementary School, established in 1889, had a pioneering hot lunch program that included mexican food.

“At first,” she said in an earlier version of this column, on August 16, 1992, “the children would walk across the playground to the janitor’s house (where) his wife served them chili, beans and plenty of bread. ”

Bonham’s first cafeteria was built in 1930; Shirley Hicks, a former director of the school food service, reported that “some of the (former) pupils of the time remember Wednesday as ‘Mexican Food Day'”.

The San Antonio Independent School District, the oldest in the city, was the first in the region to take on the responsibility of providing inexpensive midday food for its students, giving older students in need the opportunity to work in the kitchen to earn a free lunch.

From the start, Mexican food was there.

In the basement dining room of Main Avenue High School, “the chili pepper seems to be the favorite of the students in general,” said the San Antonio Light, January 23, 1916, “and several steaming pots of this dish are sold during a recess.”

The “premium” chili costs 5 cents a bowl, “and no limit has been placed on the bread and toasted cracker cubes the customer may consume.” A photograph with the story shows “the chilli line” along a fence, noting that at least 200 boys prepared a fragrant bowl for their lunch each day.

On-site cafeterias had become the norm at schools across the city by the time the San Antonio Express — Sept. 30, 1923 — visited Brackenridge High School, Main Avenue’s youngest rival, at lunchtime. Ten cafeterias were operating then, and more to come with the opening of high schools and other new schools. Their mission, according to “Mrs. LB Browne,” as the district cafeteria manager was identified, was to serve healthy fare as an alternative to less nutritious junk food (candy, pickles, and soda).

This “modified meal” could include chili, rice, “frijole beans” and “tamale bread”. All were prepared “less strongly spiced than the originals” because Browne believed that “simply seasoned” foods were better for young people’s digestion.

It struck Browne, a former dietitian at a Dallas hospital, how much the kids loved chili and tamales: “This request was so insistent that (Browne) set aside Thursday as chili day.

While the 20-cent lunches were probably the best deal, the menu on offer the day the Express reporter visited consisted of creamed brains, English peas, potato salad and bread . Again yielding to student demand, cafeterias also offered ham sandwiches and burgers, “also removed from the high seasonings”. The story is titled “San Antonio Kids Prefer Mexican Food,” and you can’t help but hope Browne took it to heart.

There isn’t much documentation of the move to Enchilada on Wednesday, but Alamo Heights Independent School District spokeswoman Patti Pawlik-Perales ran through the district’s history, “One Hundred Years of Excellence: history of the Alamo Heights Independent School District” by Mary Fisher, and found a reference to school lunches among students who started kindergarten in 1924. One of them, Gaines Voigt, “recalls staying for lunch on Wednesday because it was Mexican Food Day,” although he didn’t say when.

A SAISD press release from around the time of the 1992 column stated that longtime district employees “said they heard folklore dating back to pre-World War II lore”.

This matches the recollections of educator Joe Bernal, quoted in the February 8, 2000 Express-News. Bernal, who graduated from Lanier High School in 1944, came home for lunch while a student at the Brackenridge Elementary School, where “we had a lot of Mexicans but no Mexican food. But by the time he was in high school, “the enchilada tradition was established.”

Beginning in 1950, SAISD lunch menus printed by Light each day of the week, “to help housewives avoid duplicates in their household menus”. Wednesday after Wednesday, the basic menu is there: Chili, frijoles or pinto beans, Spanish rice, enchiladas and sometimes tamales. Pineapple salad, whipped cream gelatin or “chocolate squares” were the desserts, with sandwiches and burgers as alternatives.

It was the start of the golden age of San Antonio school lunches, when every Wednesday was the occasion for what looked like a birthday dinner of favorite foods. Cornbread, sometimes with jalapeños, and chocolate cake were added in the 1960s, and chocolate milk was the drink of choice for many students.

Those who normally packed their lunch or headed home joined the long queues in the hallways; For the record, attendance was at its highest on Wednesday. The cafeteria staff made extra enchiladas to sell for 10 to 25 cents each, depending on what school you attended and when.

Donna Council Lampman, a 1968 graduate of Alamo Heights High School, regularly had six enchiladas, “poured chili over them, smashed Fritos over the chili, and had rice, beans, salad, and dessert.”

At most schools, if there were any leftovers, they could go in the Thursday “tamale pie”, “frito pie” or “Mexican casserole”.

So why was Wednesday everyone’s lucky day?

In the 1992 column, an explanation came from Hicks, the former director of food services.

The enchiladas, Hicks said, were delivered on Monday, but given the time it took to roll hundreds of them, they would be prepped and ready by Wednesday.

In the home district, San Antonio ISD spokeswoman Laura Short said, “We continue to serve Mexican food every Wednesday and offer enchiladas every three weeks on our cycle.”

Enchiladas are still hand-rolled, using the neighborhood’s own recipe.

At North East ISD, spokeswoman Aubrey Chancellor said they were still served once a month, on the canonical day, on all campuses. However, the menu “has been modified over time to decrease fat and calories”.

Enchiladas are also still on the menu at Northside ISD, said Barbara Castillo, assistant director of operations for infant nutrition.

As for schools in Alamo Heights, Pawlik-Perales said, enchiladas are served on Wednesdays, and the sauce is homemade and “always a fan favorite.”

For recipes for NEISD and SAISD Enchiladas and SAISD Chocolate Cake, visit this column’s Facebook page or Twitter feed.

Do you know this man? Living John Doe found wandering in Michigan