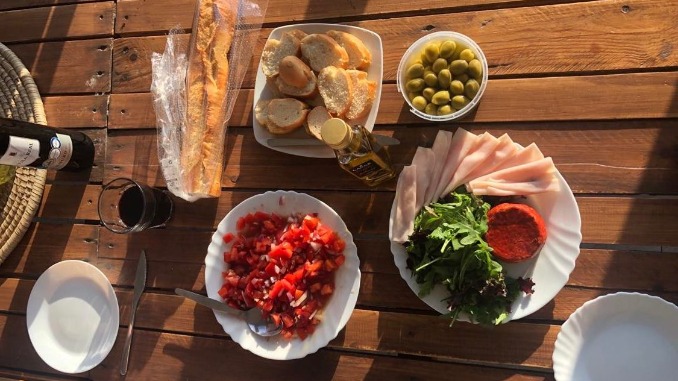 It’s June 2019 and I’m sitting in the garden of my hostel in Girona, Spain, reading a book, when a man comes out of the kitchen with a bowl of sparkling red cherries, a bottle of vermouth and two mismatched glasses. “You need it,” he said, sitting down. It’s the first time I’ve met this man, but he pours us both glasses of vermouth and offers me some cherries. I accept. As we start chatting and getting a little drunk, more and more guests arrive at the hostel, loaded with bloated backpacks and hungry for company and wine. We open seemingly endless €2 bottles, and someone lines the table with olives, a salad and a simple plate of pasta.

At 5 p.m., when I sat down with my book, I didn’t know anyone in Spain, and at 10 p.m., I hear painfully intimate stories of divorce, mental health struggles, life-changing decisions. Despite a close social circle at home, these stories, passed across the table with the bottle of vermouth, feel more intimate and honest to me than most of those I’ve had with friends who are part of my life for more than ten years.

If this had been my only experience in an inn kitchen, I would have considered it luck, a chance meeting of compatible souls who got lucky, twisted together in time and space for a while like the strands of spaghetti we ate carelessly to stave off our hunger and hangovers. But it wasn’t, and it’s a scene that’s been repeated for me time and time again in hostels: strangers meeting in an ill-equipped kitchen, wine or beer flowing, spilling soon the secrets of our lives on plates of hastily prepared pasta or makeshift curry.

There is plenty of evidence that supports the idea that hostel kitchens are spaces for creating community, connection and commensality. In fact, it’s not uncommon for hostels to host free breakfasts and dinners specifically to create a sense of community. And since many solo and young travelers choose hostels for their accommodation, it makes sense that guests are interested in both making friends and saving money by eating or preparing food in the kitchen. The resulting friendships that are formed around these tables are intense: discovering a new country together for a short period of time encourages a kind of radical openness that I have never experienced elsewhere: a closeness that does not come from long years of shared history but the knowledge that these people will only be in your life for a short time, so you have little to lose by being fully and completely yourself.

But it wasn’t until after my trip was over, I was living alone and COVID hit that I really realized the importance of these meals and the connections that came with them. Although I’ve always been, on the whole, introverted and don’t usually mind spending time alone, I soon discovered that I desperately miss sitting around a table with a group. strangers of all ages sharing a bottle of cheap wine and finding, despite coming from radically different parts of the world, we had all encountered similar emotions and experiences. While travel in general presents these opportunities more than “normal” life, the hostel kitchen seems to be a particularly important space – this same energy is rarely found on a train or in a hotel bar.

We might like to think that our nutritional and social needs are largely separate, but if going from hostel life to a pandemic has taught me anything, it’s that these two facets of life are, or at least should be. be closely related. The most hearty meal eaten alone day after day is not as nourishing as a far less luxurious meal eaten in the company of other people, especially those willing to go beyond conversation. Research indicates that eating in the presence of others is important for feelings of emotional well-being, and there is also evidence that commensality encourages us to make healthier choices.

Unfortunately, most of us don’t live in a culture where eating with others is encouraged. In 2019, 28% of American adults lived alone, indicating many solo meals. COVID has made it harder to get together with friends and family to meet at restaurants. And even though we’re tentatively starting to go out more, we’re still faced with the fact that even restaurant dining is relatively isolated – inviting a stranger to sit at the table with you would generally be considered a faux pas. Even many restaurants that had communal seating have adjusted their spaces to allow for greater social distancing. Social distancing is the result.

At a time when the world seems so stressful and uncertain, the hostel kitchen serves as a model for a different kind of food. We’re not hungry for the most luxurious menus or over-the-top cocktails. What we crave is both free and priceless. Communal meals – communal meals with strangers, no less – could be a balm for so many things that plague us: isolation, loneliness, hunger, literally and figuratively.

Obviously, making a reservation on Booking.com and flying to Spain is not the answer to fixing our broken dining structure, and hostels themselves are an imperfect model: although it is Although mostly budget accommodations, they are still plagued by privilege, ageism and exclusivity. But for me, the hostel kitchen is a symbol of what sustenance should be. It encourages us to look beyond our own plates and into the eyes of those across the table and asks us to do more than just consume. It is a reminder of the joys and responsibilities of community, to ensure that we are all nurtured.

I’ve had many delicious meals since COVID began, many in the comfort of my own home with only my cat begging for a slice of sushi to keep company, and some at thoughtful restaurants that have managed to survive the past two years. But to be honest, I’d trade most of those meals to be back in the setting Spanish sun, sipping vermouth and spitting cherry pits, surrounded by the warmth of foreigners. I hope we can all find this kind of food wherever we are in the world.