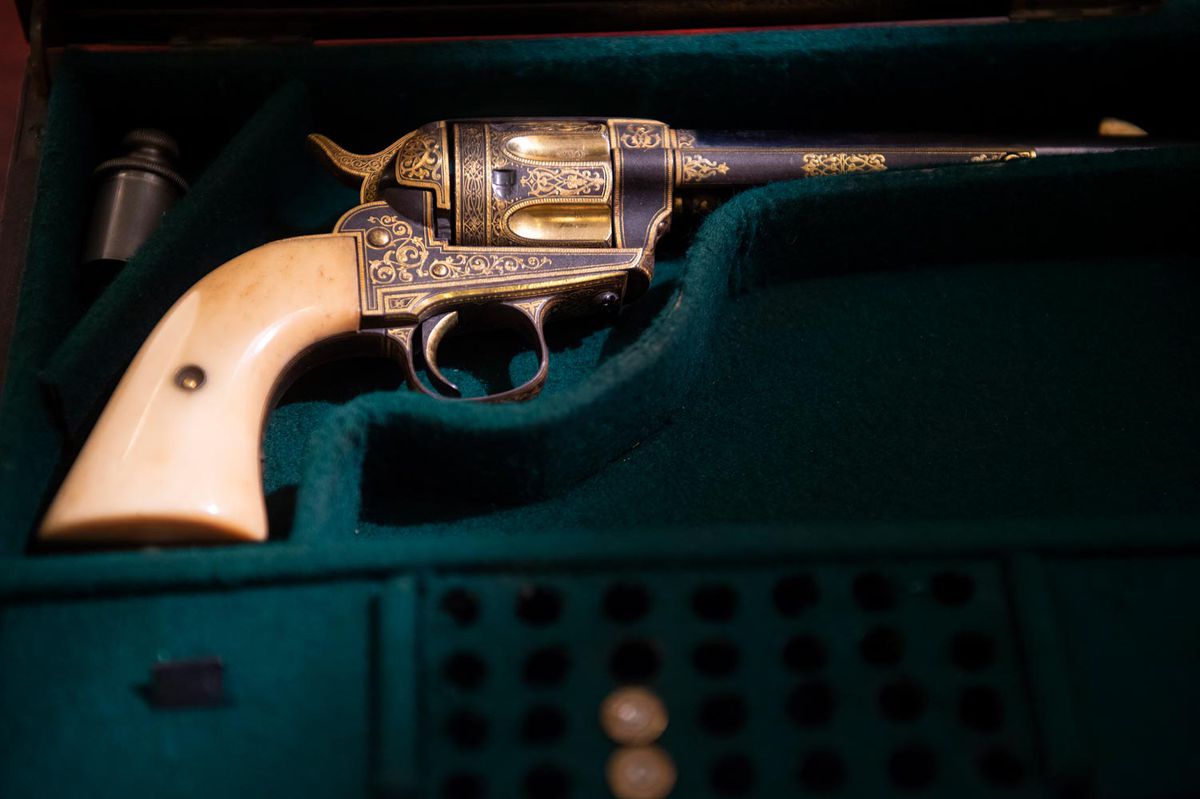 President Andrés Manuel López Obrador returned from Cuba with a pistol loaded with symbols. During his working tour in Havana, the Mexican president received from the hands of his Cuban counterpart, Miguel Díaz-Canel, a historic 38 millimeter revolver as a sign “of the friendly relationship shared by the two countries”. The steel and gold piece is now in the Revolución room of the La Grandeza de México exhibit at the National Museum of Anthropology. His long journey began around 1910 in Eibar, Spain, an industrial town known for iron-making, which spawned a thriving arms industry. The coin was offered alongside two cartridges of percussion bullets and a wooden, mother-of-pearl and silver box, with a plaque bearing a dedication by then Mexican President Francisco I. Madero. It was a gift to caudillo José Doroteo Arango, better known as Francisco Villa, “for his value to the homeland”.

“It is a historical and artistic piece, but also an object that harbors a diversity of meanings, starting with the relationship between the leader who started the Mexican Revolution and the caudillo whose role was vital in the development of the historic event”, explains Diego. Prieto, director of the National Institute of Anthropology and History. The weapon ended up in the hands of Cuban historian Eusebio Leal Spengler, who acquired the gun after assuming it had been brought to the island by a veteran revolutionary.

López Obrador often expresses special admiration for Francisco I. Madero, imagining himself as the historical figure’s heir and successor. Enrique Krauze, who holds a doctorate in history from the Colegio de México, writes in his book Mexicanos eminentes: “Francisco I. Madero was a kind of Mexican David who, despite his small size, defeated the ancient and legendary Goliath Diaz. He is also the apostle sacrificed after the tragic decade. The idea that Mexico could be a democratic country could only suit a soul as innocent as Maduro’s, but there was nothing innocent about that belief. To think that democracy in Mexico is a chimerical project, viable perhaps for the year 2347, is as false as claiming that Madero’s middle name was Inocencio.

To follow the trail of the weapon, we must go back to 1872, when Alfred Nobel, who discovered dynamite, opened his first Spanish factory in Vizcaya. The mining of the region and its proximity to France and the commercial port of Bilbao led the Swedish inventor and a group of businessmen to create La Dinamita, which gave birth to the Spanish Union of Explosives (UEE), the world’s third largest group of companies in the sector. Established in Bilbao, the UEE obtained a monopoly in Spain in 1897. In 1911, it began to manufacture military explosives: gunpowder, trilite, tetralite and cartridges for the Spanish Ministry of Defence. They then incorporated other factories, including the Spanish Arms and Munitions Company of Eibar, province of Guipúzcoa, in the Basque Country, where the pistol that Francisco I. Madero would later manufacture for Pancho would be manufactured. The weapon was made by the firm Irióndo y Guisasola and adorned with yellow numerals and blue details, as well as a “U” with a double royal crown as an inscription. In 1919, a few months after the end of the First World War, the arms factories of Eibar went into crisis. Orders ended and inventory piled up, but almost none of it was closed. Beistegui Hermanos (BH), Garate Anitua and Orbea were transformed into bicycle factories, Olave and Solozabal moved from guns to office supplies and Alfa started manufacturing sewing machines.

“Pancho Villa and Francisco I. Madero have always liked each other very much. When revolutionary troops entered Mexico City in December 1914, Villa went to weep at the grave where Madero had been buried. He couldn’t hold back his tears. Before that, Madero saved Villa’s life. At the end of this stage of the Revolution, Porfirio Díaz decided to leave the country, in 1911, and Pancho Villa joined the army fighting the rebels in northern Mexico. Victoriano Huerta always saw Villa as a “temporarily armed mob”. They had been ordered by Díaz to shoot him. As the soldiers were about to fire, Madero’s brother intervened. And he receives a telegram from Francisco to spare Pancho Villa’s life,” writer and historian Enrique Ortiz explains to EL PAÍS.

Another episode that shows the depth of their friendship occurs in December 1914. Pancho Villa changes the name of Calle de San Francisco, one of the most emblematic streets of the historic center, to Calle de Francisco I. Madero. “The appreciation Villa had for Madero reached this degree during the revolutionary process. He climbed a ladder, took the plate and nailed the newly called Francisco I. Madero. Villa believed in the ideals of Madero himself. The Porfiriato plunged the population into poverty and only an elite benefited from it.The opera house Bellas Artes, the Ministry of Communications, where the National Museum of Art is today, were only for the cliques who ruled the country, while more than 80% of the population lived in conditions of extreme poverty”, explains Ortiz.

Where the gun was made and why it came to Mexico are certain. The only mystery is how and when he arrived in Cuba. Some speculate that the weapon was brought to the island by a revolutionary veteran and then fell into the hands of Eusebio Leal Spengler, a renowned historian from Havana, who died on July 31, 2020, at the age of 77. . He had a doctorate in historical sciences from the University of Havana and had obtained a master’s degree in Latin American, Caribbean and Cuban studies. He was also a specialist in archeology and did postgraduate studies on the restoration of historic centers in Italy. In addition, he was a great collector and admirer of Mexican culture. In 2016, the Mexican Embassy in Cuba paid tribute to Dr. Eusebio Leal, recognizing his career and his work to promote Mexican culture in Cuba and bring the Cuban and Mexican people together. Dr. Leal was awarded the Mexican Order of the Aztec Eagle, the highest honor Mexico bestows on foreigners to recognize service to the Mexican Nation or humanity. Leal Spengler also directed the master plan for the rehabilitation and restoration of the historic center of Havana. Last April, Leal’s son, Javier Spengler Estébanez, handed the gun over to the historian’s office in Havana, asking for his father’s express wish: “that the piece of cultural heritage be returned to the great Mexican nation.” .