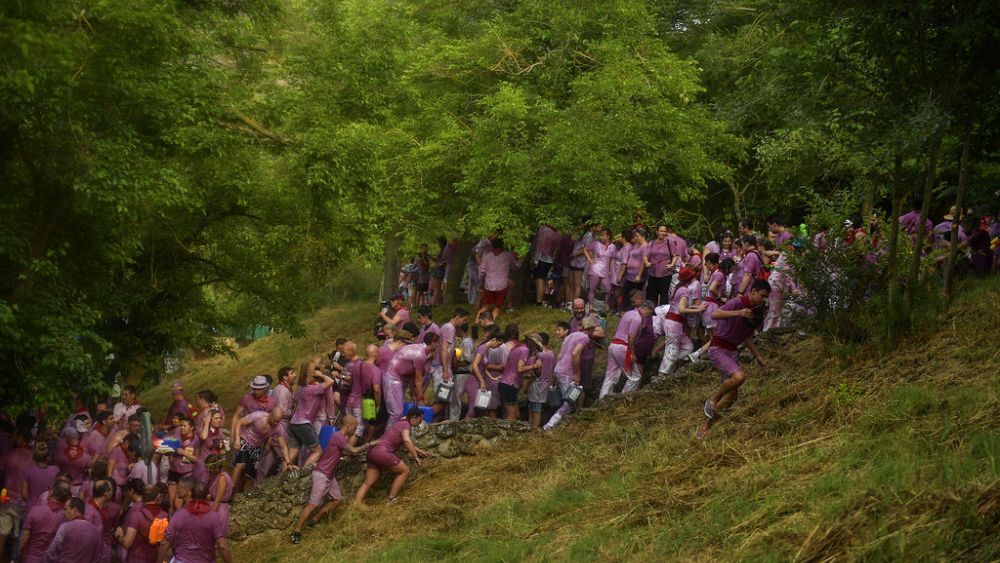 It’s always party time somewhere in Spain. This bustling European country is renowned for its year-round roster of festivals, with live music and fireworks illuminating village squares and city streets across the country.

But the real joy is finding the hyper-local festivals that are held in a particular region for a particular reason. For visitors, they are the ideal way to understand what makes a territory vibrate.

Here is our selection of the best festivals in Spain, from human tower competitions to cider drinking world record attempts and historic pirate beach battles.

When? Second Monday in May

Simulations of historical battles between Moors and Christians are celebrated in several regions of Spain throughout the year, but nowhere else than Majorca will you see a band of Muslim pirates storming the beach.

The annual Es Firo in the northern town of Sóller commemorates a failed attack on the town by invading Algerians in 1561.

When? Early to mid-May

Cordoba is famous for its pretty courtyards – a legacy of the Andalusian city’s Islamic heritage.

Most of these private, plant-filled spaces remain hidden year-round except for one week, when residents open their doors for the colorful Patio Festival.

It includes a competition for the best patio, as well as flamenco and concerts in some of Cordoba’s most exquisite ancient courtyards.

AndalusiaThe dressage traditions of are elaborate and emblematic in Spain. And as the home of the Royal Andalusian School of Equestrian Art and dozens of stables, there’s no better place to see horse shows than Jerez, especially during the annual Horse Festival.

Stallions strut their stuff each year through the sherry capital’s González Hontoria fairgrounds, adorned with paper lanterns and garland-adorned arches.

When? End of June

Ever wanted to get red wine shot out of a water gun? Then Haro is the place for you.

This pretty village in La Rioja, the most important in Spain Wine Regionhome to the cheerful annual Haro Wine Fight, which sees fighters douse each other with the local drink using buckets, jugs and bottles.

The festival begins with a 7km procession led by the town’s mayor, followed by a mass and then a descent into the red wine-soaked chaos.

The event has been in earnest since the 1960s, but its origins lie in a 13th-century border dispute between Haro and a nearby village.

When? Second week of July

Bullfighting has become a major phenomenon over the past 20 years, not least because it is considered a bit dangerous.

Held more than a week a year in the medieval Navarrese city of Pamplona, ​​it’s all about letting mobs of bulls run wild through the streets in pursuit of willing runners.

Up to 3,500 daredevil participants take part every day. Deaths – usually from engorgement – are rare, but not unheard of.

Bullfighting is a practice that dates back to the 13th century in Spain. Pamplona isn’t the only city to still do so, but the celebration here – linked to the martyrdom of San Fermin, the city’s patron saint – has become legendary. The photos are crazy.

When? Second Sunday in August

Formerly exchanged with Cistercian monks and distributed to the poor, Galician ‘pulpo’ (octopus) has been celebrated at local fairs since the 16th century.

But it wasn’t until a group of locals launched the annual Festa do Pulpo de O Carballino gathering 60 years ago that it became more widely known as a regional gastronomic specialty.

Today, thousands of tourists descend on the municipal park of O Carballino every year to gorge themselves on the estuarine delicacy and taste local dishes such as pulpo a gallega, served with sweet paprika and potato.

Every year, hundreds of people gather on Gijon’s Poniente beach to break the world record for the most people simultaneously pouring cider in one place. The contest is the pinnacle of Gijon’s annual natural cider festival.

Asturias is the cider capital of Spain, responsible for 80% of the country’s production. And every year, the Asturian coastal town of Gijon celebrates its monopoly with this week-long fiesta of apple markets, cider classes, urban art and tastings at cider cellars.

When? Last Wednesday in August

One of Spain’s most original festivals is La Tomatina, the annual tomato-throwing rampage in the Valence town of Bunol.

the food fight – held in the town square – only lasts an hour, but it’s long enough to paint the town (and yourself) red. Then a fire truck douses everything and the crowd dissipates in celebrations.

Unlike most festivals in Spain, this one has no religious background. It all started by accident in 1945 when a fight broke out between young locals near a vegetable stand during a parade of giants and bigheads (the papier-mâché head costumes made famous by the Fallas of Valencia ).

All fans of Paella know that the best dishes come from the region of Valencia. But one place in particular, Sueca, is known as the “rice city” of Spain. Every year, the inhabitants celebrate their favorite grain during the Rice Festival.

During the first half of September, the cultural program of the festival features live music, street parties and fireworks.

Visitors also have the chance to taste the starters for the international paella competition that coincides with the holiday, visit the local rice fields and watch the rice parade.

When? First weekend of October

Building ‘castells’ – human towers – where organized groups scale each other’s shoulders to create towers of up to 10 stories, has been a sport in Catalonia for over 200 years.

But in 1932, this remarkable feat was formalized as a competitive sporting event in its heart of Tarragona with the Castells Accordswhich now takes place every two years in even years.

Around 30 teams compete over a weekend at the Tarraco Arena Plaça de Tarragona, with five legs scored to determine the winners. As capacity is limited inside the competition space, it is not easy to get tickets for the live event; Saturday places are generally less in demand.

This breathtaking spectacle has contributed to enriching the castles of Catalonia UNESCOon the 2010 Intangible Cultural Heritage List.