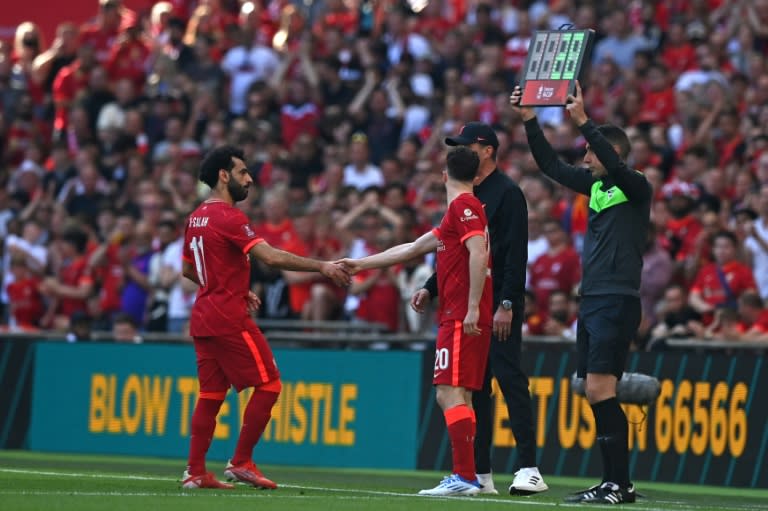 Liverpool beat Chelsea on penalties in a final for the second time this season on Saturday, staying on course for an unprecedented quadruple of trophies.

A game with few clear chances ended 0-0 after extra time meaning both sides faced a repeat of the League Cup final shootout in February, which Liverpool also won .

The two teams traded missed penalties but Alisson Becker saved Mason Mount’s effort and substitute Kostas Tsimikas made no mistakes to give Liverpool a 6-5 win.

AFP Sport looks back on three talking points from the game at Wembley.

The massive ranks of Liverpool fans fell silent when Alisson demanded treatment just before the half-hour mark, but minutes later it became apparent Mohamed Salah was in bigger trouble.

The Egyptian striker sat on the grass surrounded by teammates and couldn’t continue as Diogo Jota came on as a substitute.

Until then, most of Liverpool’s early threats had come from the left through Luis Diaz, but the loss of their top scorer was a blow.

It will also be a serious concern for Liverpool ahead of the final two games of the Premier League season and the Champions League final against Real Madrid.

Salah, who is rarely injured, had a trying schedule as Liverpool fought on all fronts and he also made it to the final of the Africa Cup of Nations.

He remains on track to claim a third Premier League Golden Boot, although Tottenham’s Son Heung-min is now just a goal behind him.

More importantly, will he return to face Real Madrid? He will be desperate to play, with a score to settle after their 2018 final loss to the Spain side.

Luis Diaz arrived from Porto in January to bolster an already formidable Liverpool attack. Four months later he was looking at home in the starting XI at Wembley.

The Colombian livewire seems to have been in the front line for years and was in devastating form from the first whistle, lining up alongside Sadio Mane and Salah.

Moments later he was cleared down the left and was in goal, only for Chelsea keeper Edouard Mendy to put his legs over the ball before it was cleared.

He faded after that initial flurry but was a threat again after the break, flashing wide then curling a right-footed shot some more with a quarter of the game to go.

He had a chance to win the game with eight minutes left, but hit the post, throwing his hands in the air in frustration.

Diaz again came awfully close on 90 minutes but it was not to be his day and he was substituted to a standing ovation from the Liverpool fans in extra time and was named man of the match.

Romelu Lukaku started when he arrived at Stamford Bridge last August for nearly £100m ($122m) as a club record, but it’s been a bumpy ride ever since.

Chelsea won the Champions League without the Belgian striker last season, but his signing was made with the intention of challenging for the Premier League title.

The 29-year-old is the club’s top scorer with 15 goals so far in all competitions in his second spell at Stamford Bridge, but he hasn’t fully convinced.

The FA Cup final was an opportunity for Lukaku to convince his manager Thomas Tuchel and the new Chelsea regime that he is part of the club’s long-term plans.

The powerful striker was a handful for Virgil van Dijk but the Liverpool defender organized it well.

Lukaku had a half chance at the end of the first half but fired in a game in which clear openings for him were rare.

He was replaced by Hakim Ziyech in the final minutes of regulation time.