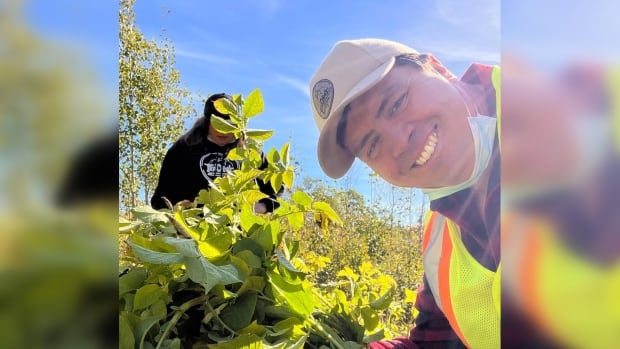 Jacob Beaton harvested a bounty of potatoes on his farm in northwest British Columbia last week, but they’re not the kind of potatoes you’ll find in the supermarket.

Tea Creek Farm in Kitwanga had actually completed its first harvest of Ozette potatoes, which Beaton says are one of the oldest kinds of potatoes indigenous peoples grew in the coastal areas of what is now Colombia. -British.

Beaton (Dzap’l Gye’a̱win Skiik), a member of the Eagle Clan of the Tsimshian First Nations, says until recently that he believed that settlers brought potatoes directly from Europe.

“I wasn’t aware of all the native foods grown by farmers in what they called the New World,” he told the CBC show. sunrise north.

“It turns out that the Haida, the Tsimshian [and] The Tlingit from all along the coast, [and] the Makah people and the Coast Salish…all grew potatoes hundreds of years ago.

Beaton says he learned about the Ozette variety when Gitxaala members from the north coast came to his farm to learn about farming and brought some to cook with seafood.

Ozette’s fry potatoes had been grown and used by the Makah Nation in what is now the northwestern tip of Washington State for about 200 years after they were likely brought from South America by settlers. Spaniards, according to a grassroots organization. Slow Food Seattle.

In addition to their great taste – described as nutty and earthy – these potatoes are also important in enabling indigenous communities to regain their food sovereignty.

Beaton says he has heard from local elders that their parents were great farmers until the colonial government forced them off their farmlands.

This led to the loss of crops like the Ozette potato and, more importantly, he says the loss of agricultural skills due to colonization led to a disproportionate lack of food security – regular access to safe and nutritious food – among indigenous peoples.

A University of Toronto study in 2020, more than 30% of off-reserve Indigenous people in Canada’s 10 provinces were food insecure, while those in the territories and on-reserve were “known to be highly vulnerable to food insecurity”.

Both varieties were once grown by native farmers in what is now British Columbia.

Traverse, which is now applying for federal funding to fund the project, hopes more indigenous farmers in the province will be able to enroll. Interested persons can contact her at 4thsisterfarm@gmail.com.

“These are culturally significant foods that a few of our countries have eaten and preserved for many generations,” she said.

It’s “KungFu” time to get out of bad luck!