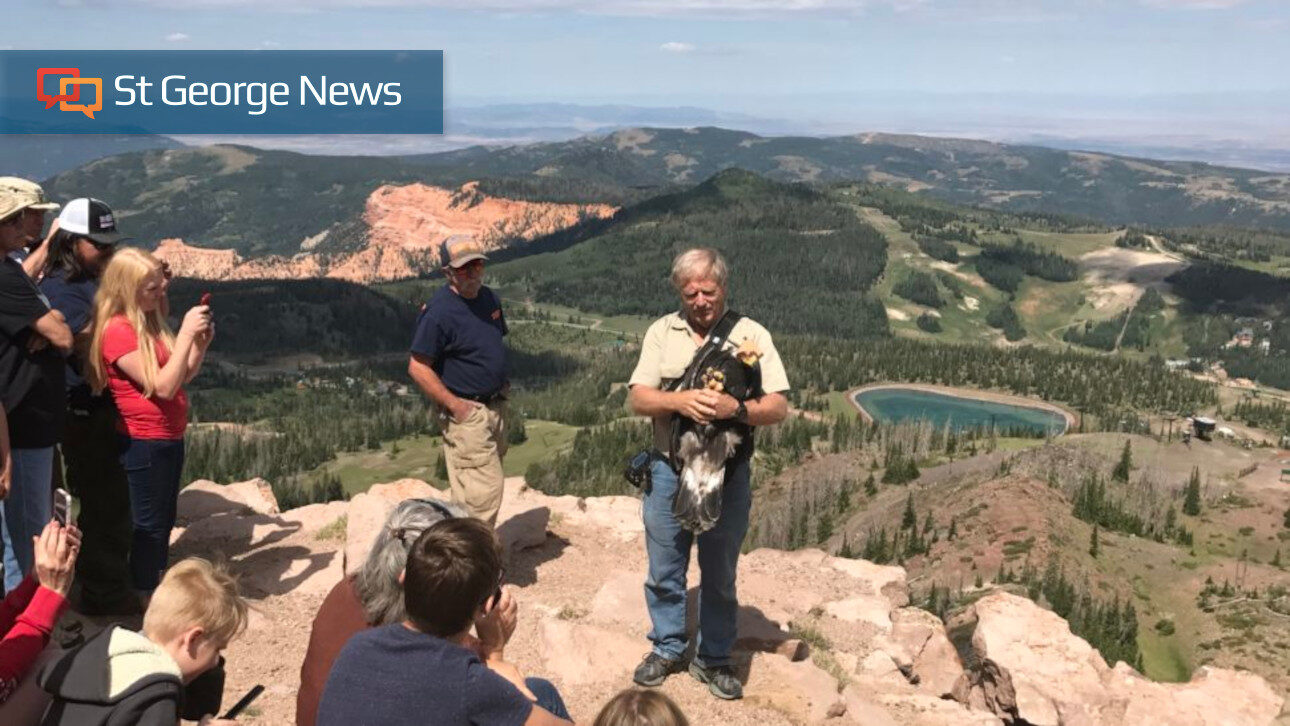 Southwest Wildlife founder and director Martin Tyner talks to a crowd of about 100 people who came Friday morning to witness the return of a golden eagle to the wild, Brian Head Peak, Utah, July 21, 2017 | Photo by Tracie Sullivan, St. George News/Cedar City News

ST. GEORGE- A bill proposed by the Utah legislature would officially name the golden eagle as a state-designated bird of prey. Of course, as described in the language of the bill, Utah already has a state bird: the seagull.

This designation was made in honor of the famous early story of The Church of Jesus Christ of Latter-day Saints when, in 1848, swarms of seagulls descended to eat the insects that tormented the pioneer harvest.

“Community members reached out to me,” Sen. Michael McKell of Spanish Fork told St. George News. “The Seagull is pretty awesome, and that pioneering story is incredibly important.

“But the thought was, couldn’t we find something besides the seagull that reflects the whole state,” McKell added.

“And in Native American lore, the golden eagle is considered a messenger of the gods,” McKell said. “The golden eagle symbol matters and is important.”

McKell sponsored the state birds of prey designation bill, designated SB 116 in the 2022 Legislature, and it passed the Senate with a single vote against and sent to the House Thursday.

Rep. Marsha Judkins, of Provo, the bill’s sponsor, said in an email to St. George News that she was asked by an enthusiastic friend and member of Hawkwatch if she would be the house godmother.

“I thought it looked like a fun bill. I also think the golden eagle is an extremely cool raptor,” she added.

Financially speaking, the bill is easy for legislators to accept, especially since it has no cost.

With the abundance of official state symbols (including the Dutch oven, Utah’s official state cooking pot), residents may wonder if another is needed, especially when there is already one. bird, animal (moose), dinosaur (Utahraptor), fish (Bonneville cutthroat trout) and flower (sego lily).

“Need is not the right word,” said Martin Tyner. “Do we need a state tree or a flower? We don’t need another symbol. But is this a good thing? Absoutely.”

As a wildlife educator, scientist, and bird rescuer for more than 40 years, Tyner has seen the golden eagle thrive in Utah.

“When I first moved here 43 years ago, the Utah Division of Wildlife started bringing animals to me and I noticed the large number of golden eagles being shot,” said said Tyner.

“Eagles were seen as pests of livestock, and there were old wives’ tales and misunderstandings about what the eagle is and its role in the environment,” he added.

Through his outreach efforts and his work at the Southwest Wildlife Foundation in Enoch, Tyner has helped raise awareness of the Utah Golden Eagle.

“Real progress has been made in the area of ​​education. The Utah Division of Wildlife Resources and educators have raised awareness of the importance of these animals,” Tyner said. “Utahans are ready for a state bird of prey, and the golden eagle would be a wonderful choice.”

Check out all of St. George News’ coverage of the 2022 Utah Legislature here.

Eric George Goold came to St. George News from southwestern Colorado, where he was a radio reporter. He was a journalist for over 20 years in five different states. He earned a master’s degree in English from Kansas State University and also writes non-fiction. Goold was published in Sunstone Magazine and did several public readings on local history. When he has free time, he likes chess, movies and dogs.