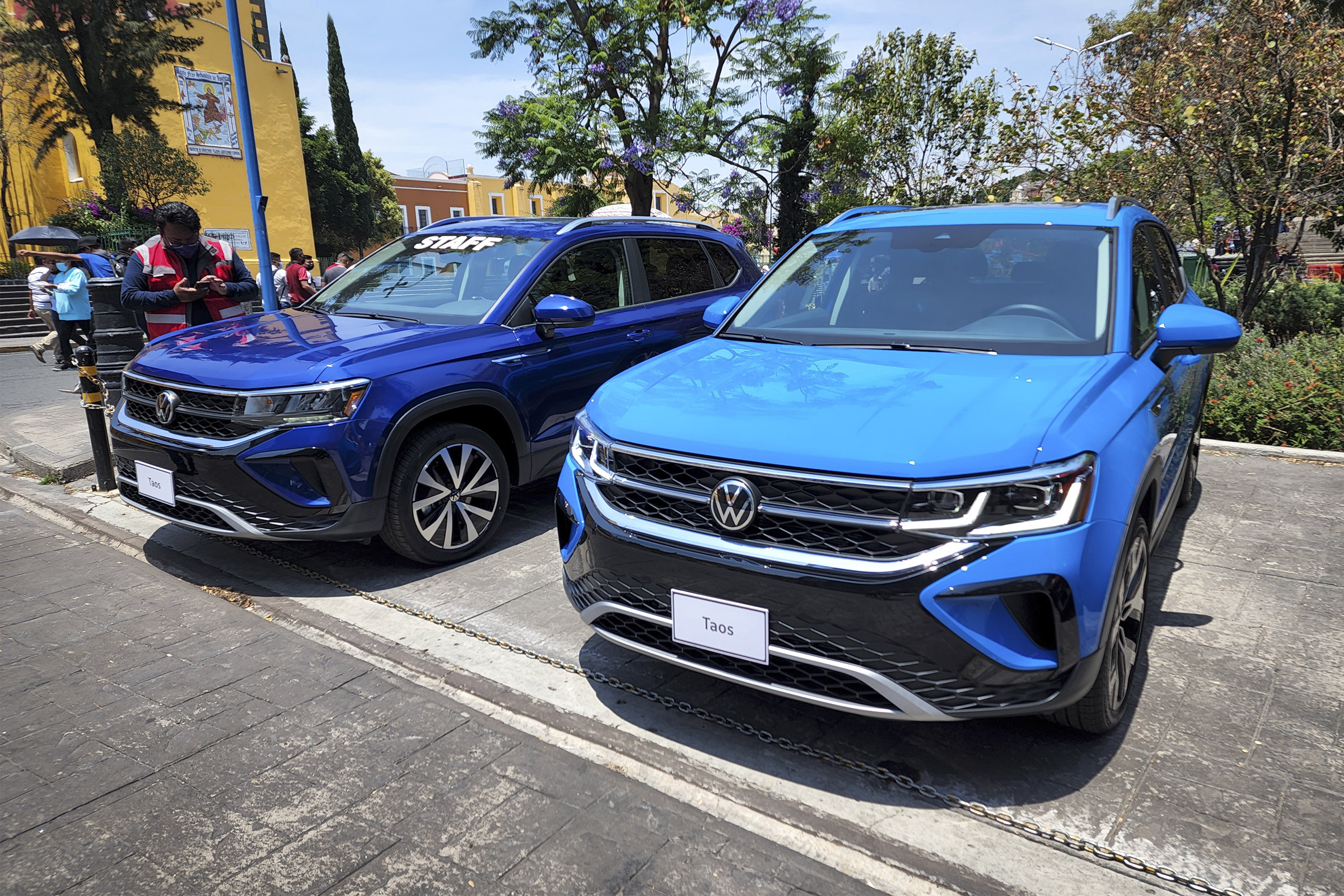 VW Tiguan vs Taos Review: Test Drive in the Heart of Mexico

By Birdie R. Kovac On May 24, 2022
Share
Home » Motors » VW Tiguan vs. Taos Review: Test Driving Through the Heart of Mexico

We tested two of Volkswagen’s newest SUVs in the birthplace of Cinco de Mayo.

Puebla is a large city a few hours south and east of Mexico City, and it’s where the annual May 5th celebration came to life, acknowledging a historic and pivotal event that unfolded on local streets.

This year, Volkswagen has invited select media to tour its manufacturing plant, attend the May 5th celebration – the 160th anniversary of Puebla’s struggle for survival – and test drive Volkswagen Taos and Tiguan SUVs made locally throughout the city and surrounding areas.

Here’s our take on these two SUVs.

First drive of the 2022 Volkswagen Taos

Volkswagen’s Puebla plant manufactures three of the best-selling Volkswagen automobiles in the United States, including the Taos and Tiguan sport utility vehicles.

The SUV segment has seen spectacular growth for the brand. In 2016, just 14% of Volkswagen customers opted for the company’s two SUV offerings. However, 5 years later, VW offers five different SUV models, which now represent 70% of its customer base.

Since its launch in spring 2021, the Volkswagen Taos compact SUV has sold more than 46,000 units. With an MSRP starting just under $24,000, the Taos offers a wide variety of features at an affordable cost.

Overall, it was fine for around-town endeavors and city-to-city jaunts. Although we didn’t fuel it during our stay, federal EPA ratings confirm 25 mpg city, 32 mpg highway and a combined rating of 28 mpg.

The sleek exterior and 19-inch alloy wheels of the Taos greeted parade passers-by as occupants rode in comfort with front seats offering heated and ventilated amenities.

Simple-to-use center console controls also gave way to quick adjustments in the heavy Cinco de Mayo traffic. An optional power tilt-and-slide panoramic sunroof created a vast open-air experience while a BeatsAudio sound system and subwoofer churned out Tejano tunes – although our attention was narrowly given to Mexican traffic versus to Mexican-influenced music.

Tons of technology, convenience and safety items were offered in our 2022 Taos 1.5T SEL AWD.

From the standard Volkswagen Digital Cockpit Pro and remote engine start to an adaptive front-lighting system with dynamic cornering lights and an available IQ.DRIVE driver assistance package, the 2022 Volkswagen Taos is a safe bet for city ​​breaks.

First drive of the 2022 Volkswagen Tiguan

A bit larger, the Volkswagen Tiguan is the best-selling VW in the world. The Tiguan develops 184 horsepower and 221 pounds of torque, powered by a 2.0-liter four-cylinder TSI engine.

While the Taos has a DSG transmission, the Tiguan features an eight-speed automatic transmission fitted with Tiptronic, allowing drivers to override automatic mode to create a fun, clutch-free driving experience. The Tiptronic transmission also allows more driver control than a traditional automatic gearbox.

Larger than the Taos, our 2022 Tiguan 2.0T SEL R-Line tester included the same technology, convenience and safety features as the Taos, but replaced the BeatsAudio sound system in favor of Fender’s premium sound. Also on board were a hands-free remote power tailgate and a rear-view camera system that featured area and overhead views.

The Volkswagen Tiguan R-Line stepped up the overall upgrades by including a plethora of sporty upgrades. From subtle Vienna leather seating surfaces and R-Line illuminated front door sill plates to an R-Line accented grille and exterior trim, the top-of-the-line R-Line showcased the luxury and features specific to the R-Line for just under US$40,000. (Our tester’s exact price was $38,515, including a destination charge of $1,195. Base Tiguan SUVs start at $26,490.)

The interior of the Tiguan featured a carefully arranged mix of materials. However, the piano black surface flowed into the air conditioning system located in the center of the vehicle. Gone are the quick-adjust knobs in favor of smooth swipeable surfaces to adjust fan speed and other controls.

Average fuel economy was 21 mpg in the city and 28 mpg for highway jaunts, with a combined rating of 24 mpg – each 4 mpg less than the smaller Taos.

Our Taos tester had supportive seats with a side bolster. The Taos was fun to drive and made city center driving easy with a quick-response demeanor when the manual mode was used. The interior lived large while the exterior seemed small.

On the other hand, our Tiguan demo model was extremely comfortable to drive, although it felt taller and wider, especially when navigating tight tracks in historic downtown Puebla.

It would make an ideal road car. Driving dynamics were refined and the suspension tuned for rough city roads, although the Taos’ ride was firmer. Taos and Tiguan were easy to see, including their rear C-pillars.

When comparing the two engines to rush-hour traffic and quick judgment calls, the Taos felt quicker and more nimble with its dual-clutch DSG transmission. Although the Tiguan was nearly 30 more horsepower, its heavier stature and standard eight-speed Tiptronic automatic transmission faltered at times when quickly adjusting gears to suit local traffic.

However, driving the Tiguan in manual mode helped its overall response.

“I can’t do a weight ratio comparison [between the Volkswagen Taos and Tiguan] since the Tiguan engine has been around for a while,” said Jerohn Anderson, product communications specialist for Volkswagen of America, Inc. “Taos shares the same engine with the Jetta and they have identical torque and horsepower figures, but Taos (AWD) is 500 lbs more.

Anderson mentioned that engine choice for the Taos came down to power versus efficiency. “The all-wheel-drive Taos has a seven-speed DSG (eight-speed auto for FWD) and the Tiguan has an eight-speed automatic across the board.”

We spent the first half of the day with the Volkswagen Taos. This took us from the Cinco de Mayo parade in Puebla through the nearby streets where the battle of Cinco de Mayo took place. As we traveled through the city of over 3.2 million people, we changed drivers outside the front door of the local Volkswagen factory.

Shortly after, we climbed the Great Pyramid of Cholula, also known as Pirámide Tepanapa, or in the native Nahuatl language, Tlachihualtepetl. Originally built over 2,000 years ago, this pyramid was partially obscured by a hill, but had a larger volume than any other ancient, man-made structure, including the famous Egyptian pyramids.

The land is still in use today, as a Spanish church is built there. This makes the Great Pyramid of Cholula not only the largest pyramid in the world, but also the oldest continuously occupied building in North America.

Next to the Great Pyramid of Cholula, a nearby market offered colorful wares as Volkswagen Tiguan SUVs lined up neatly to begin the next part of the journey: visiting the famous pottery workshop, Talavera Santa Catarina.

Talavera Santa Catrina was born in 1996, preserving an ancient Spanish tradition of making Talavera pots using foot-kneaded clay and old-fashioned wheels. Colorful glazed tiles are seen all over Puebla, paying homage to this historic craft, with artisans carefully perpetuating this style of pottery for generations to come.

Volkswagen de Mexico, including plants in Puebla and Silao, employs 13,000 people and manufactures the Taos, Tiguan and Jetta. It was normal to tour Puebla and its surroundings in locally made Volkswagens on the day of the Cinco de Mayo celebration.