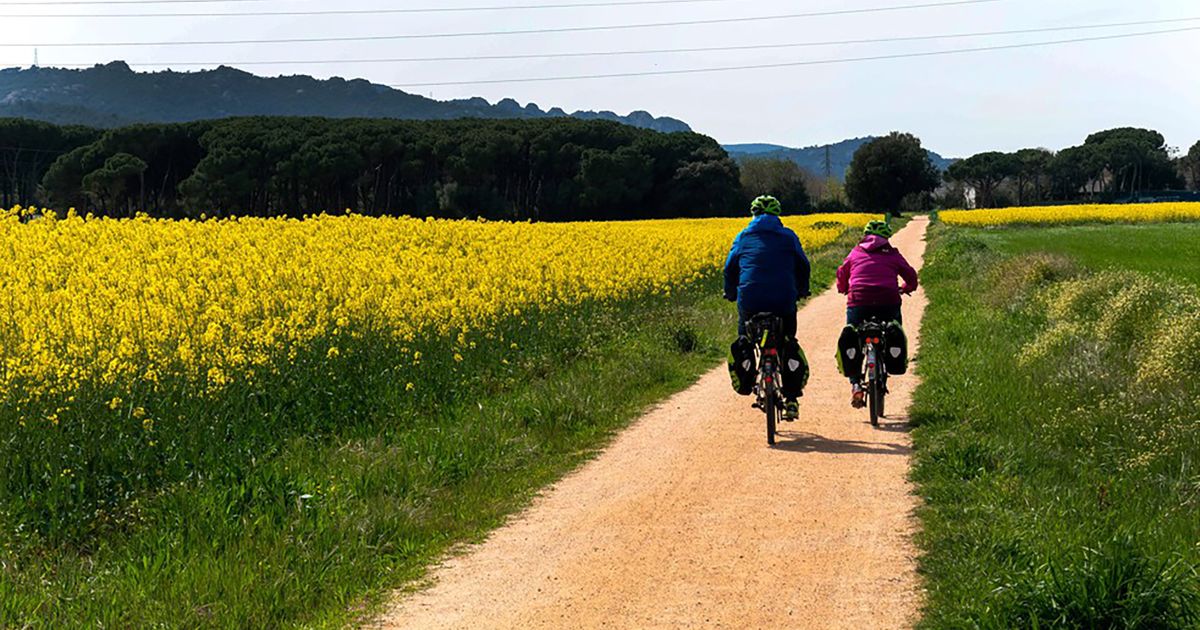 Why Cyclists Head to Girona, Spain

I didn’t think physics and the laws of gravity would allow it, but it is possible to cycle at 5 km/h – slower than a motivated pedestrian – on a bicycle without falling. If someone had told me this before I started climbing the nearby mountain, Rocacorba, a classic and incredibly steep bike ride near the city of Girona in northern Spain, I wouldn’t have believed them. . But, climbing the mountain, my Garmin GPS watch and bike computer mounted on the handlebars of my rental bike – I’m so in disbelief, I have to check both – agree that my riding speed is, in fact, at the same rhythm than snail sleepwalking.

My course on the road, which climbs about 2,600 vertical feet for about seven miles, is far from straight. To keep myself from tipping over, I constantly adjust my direction and body position, resulting in a trajectory that “wobbly” barely begins to describe. About four miles into the climb, shortly after the road goes from steep to mindlessly steep, I think stumbling over the jagged pavement might be less painful than grinding it.

Even in grandma’s tallest gear, I find it impossible to pedal smoothly uphill with inclines approaching and sometimes exceeding 13%. I have sharp, stabbing pains in both knees. The rash seems preferable.

At the beginning of April, the first day of a week’s cycling holiday, there is no particular reason beyond curiosity that I decide to ride from Girona to Rocacorba via Banyoles lake, the cattail lake which was the site of the rowing events during the Barcelona Olympics in 1992.

I’m curious about Rocacorba, because it’s easily visible from almost anywhere in Girona, a city of about 100,000 people and close to the Pyrenees and the Mediterranean Sea, with a medieval old town that was used as a filming location for HBO’s “Game of Thrones.” Also I’m curious because Rocacorba is one of the Rihannas of road riding in Europe, a race so famous among cyclists that it only needs one name, like Stelvio in the north of Italy, Tourmalet and Ventoux in France, and Sa Calobra on the Spanish island of Majorca.

Halfway up the climb, I decide that curiosity might kill me – or at least make my knees so sore they won’t want to ride the rest of the week. I turn around. After all, Girona is today recognized as one of the greatest cycling destinations in Europe and has a diversity of routes and rides. If I don’t like climbing a steep climb, there is no need to climb a steep climb.

Christian Meier, a retired Canadian professional cyclist who raced the 2014 Tour de France with the Orica-GreenEdge team and has lived in Girona since 2008, agrees. “One of the great things about Girona is that you have all kinds of rides,” he says over an espresso at La Fabrica, a cafe in Girona’s old town that he and his wife, Amber, have founded in 2015. ” The high Pyrenees are not far away, the coastal road is quite spectacular and you have climbs from Rocacorba to Els Àngels, which is just behind the town and has a nice slope. It gives me more than bit of satisfaction to hear that Meier himself isn’t enjoying the ride to Rocacorba. “It’s super steep and impossible to get into a rhythm, and the road surface is not in very good condition. There are so many other better climbs in the area,” he says.

Meier is part of the second generation of professionals who call Girona home. Among the first English-speaking pros to move to Girona were George Hincapie (in 1997) and Lance Armstrong (in 2001), who decided they liked it more than Nice, France, their old base. In the following years, a handful of Armstrong and Hincapie teammates followed. Meier says Girona was still a “sleepy city” when he arrived, but in the early 2010s the city really caught on with professional runners. “At one point we were over 100,” he says.

It is in the last five years that Girona has established itself as a cycling destination for non-professionals. “There may be nicer places to ride – like Tuscany or the Dolomites – but Girona is the perfect storm for a cycling holiday,” says Meier. “You can choose how much you want to ride your bike, and you’re in an amazing historic European city with art, culture, and great restaurants, and there’s also hiking and running walk.”

And, not that I timed this, but for about a month in early spring, there are fields of neon yellow blooming canola. On the way to Banyoles lake and Rocacorba, the sky is overcast, but I have to wear sunglasses, because the fields are so bright.

Meier tells me that I should absolutely drive to the Mediterranean Sea, east of Girona. The 160 miles of Spanish coastline between the mouth of the Tordera River northeast of Barcelona, ​​in the province of Girona and up to the French border, is called the Costa Brava. The morning after Rocacorba, however, I return to the store where I rented my road bike, Cycle Tours Catalonia, and ask for GPS directions for rides that maximize canola-sighting opportunities. I can’t imagine a landscape – even the rugged Costa Brava – beating the canola in bloom.

Canola fields are not the only criteria I give to Carlos, the store manager. I ask for rides between 40 and 65 miles and with climbs no steeper than 8% grade.

“So flat rides?” he asks. I say no before he finishes his question. I love going down. Descending on a bike at speeds between 30 and 60 mph—speeds that, yes, can be terrifying, and which took me a long time to get comfortable with—is as close to flying as it gets. I would happily pedal uphill for several hours to enjoy this feeling, but not if it causes me severe pain in my knees. Also, steep roads are difficult to climb and descending them is often less satisfying than descending a road with a moderate gradient. Steeper roads generally require more braking, which means less flight feel.

Carlos has a library of over 100 GPS tracks, and he quickly finds five that meet my criteria and uploads them to the Garmin bike computer I brought from home. (If you don’t have your own computer, the store rents them too.)

I start with a 62-mile loop that includes canola fields, a moderate climb of about 1,500 feet up a mountain in the Catalan Coast Range, a fun descent to the Mediterranean, and on the way back to Girona , plus rapeseed fields. Along the way there are also churches that date back to the 17th century, forests of cork, oak and chestnut trees, and more cyclists – speaking German, French, Catalan, Spanish, Swedish and English with an Australian accent – ​​than cars.

At the bottom of the descent from Sant Grau d’Ardenya, where the GIP-6821 ends and I turn north on the GI-682, nicknamed the “Route of 1000 bends”, I stop at the top of a steep cliff that plummets into the Mediterranean to take Photos. I stop again at least every quarter mile for the next 10 miles. The canola fields aren’t the best scenery the area has to offer.

In Sant Feliu de Guíxols, the northern terminus of the incredibly photogenic Route of 1,000 Bends, I’m tempted to have lunch at one of the many open-air restaurants overlooking the town’s beach and harbor. But I have a reservation for a late afternoon chocolate-themed brunch on the roof terrace of a hotel in Girona, about 40 km away. So instead, I munch on the xuixo, a deep-fried regional pastry, coated in sugar and stuffed with Catalan cream, which I bought in the morning at the bakery down the street from my apartment and get back in the saddle.

During the week, I don’t do the five rides that Carlos uploaded to my Garmin. One of them – the “Hincapie Loop”, so named because it was one of Hincapie’s favorites – has two perfectly inclined climbs (and descents), fields of canola in blinding bloom, villages with cobbled streets and vast panoramas of the Pyrenees and the Mediterranean. I do it twice.

Another day, with Meier’s words that horseback riding is just part of Girona’s appeal in my head, I leave my bike in my apartment. Instead, I walk about 90 minutes from Girona’s old town to the ruins of an ancient mountaintop castle in the nature reserve, Les Gavarres, southeast of the city. I also survey the stone walls dating from the 9th century which made it possible to protect (or not) the city from Visigoth, Moorish and French invaders. At a gelateria branch of a nearby three-star Michelin restaurant, I try a violet-coconut sorbet. A few hours later, because violet, a new flavor for me, turned out to be quite tasty, I have the confidence to come back to try another unusual flavor of ice cream, parmesan, which I prefer over pasta. An evening in the thermal baths washes away the last of the residual Rocacorba pain from my knees.