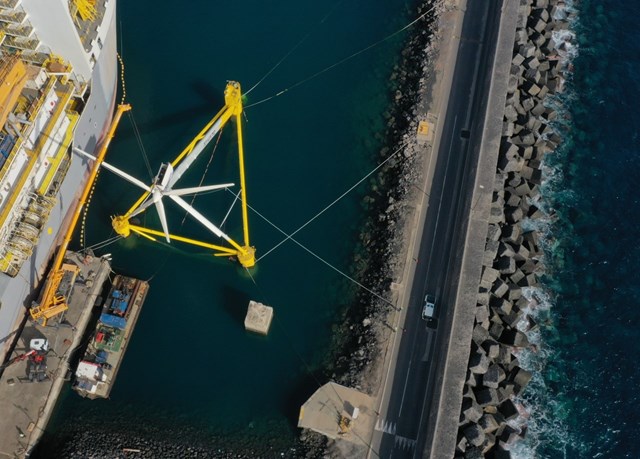 X1 Wind has completed the rotor assembly for its pioneering floating wind platform in Spain.

Equipped with a specially adapted Vestas V29 turbine, the unique “downwind” system is able to “wind vane” and orient itself passively with the wind to maximize energy efficiency.

Managing Director Alex Raventos said: “We are excited to take this final step as we move towards deployment.

â€œThe rotor assembly represents a symbolic moment in this project, installing the blades that will ultimately harness the wind and demonstrate our leeward design.

â€œIn the coming weeks, we will proceed with the installation of cables and anchors before the platform is parked at a water depth of 50 m for final commissioning.

â€œWe believe that we have now developed the technology to take full advantage of the marine environment, while respecting the future sustainability of the ocean.

“Our system will result in greater structural efficiency, reducing loads, especially bending moments at the base of the tower, allowing for a lighter design.”

The X1 Wind platform uses the best features of a semi-submersible – with a shallow draft – and the ability to reach deeper water through a leg platform mooring system. tension (TLP) – with a small footprint on the seabed.

However, windward configurations require specific measures to avoid collisions with the towers, with the challenge increasing as the turbine blades lengthen.

Casanovas said: “With more than 100m of blades increasingly prevalent in offshore environments, significant measures are needed to avoid collisions with towers.

â€œThis usually involves increasing the distance between the blades and the tower by applying a tilt and taper angle, and designing more expensive pre-bent and stiffer blades, which also makes them heavier.

â€œUsing a downwind configuration reduces the risk of collisions with towers, opening up the possibility of using large-scale wind turbine designs that are lighter, more flexible and therefore less expensive.

“These are key features that will allow the development of future” large scale “leeward structures with research already carried out on 200m blades and 50 MW power ratings.”

The deployment of X1 Wind’s X30 is carried out in conjunction with the revolutionary PivotBuoy project supported by a pan-European consortium comprising the leading companies EDP NEW, DNV, INTECSEA, ESM and DEGIMA and the world-class research centers WavEC, DTU and PLOCAN.

The main advantages of the PivotBuoy system include reduced float weight, faster and cheaper installation processes and the ability to reach deeper water with a minimal footprint on the seabed thanks to the TLP mooring system.

Spanish audiobook market to grow exponentially from 2021 to 2026